Private institutions like ours are now facing the task of carving out a place for themselves within this environment as a place of communication and inspiration for the expert scene.

Markus Bogensberger was the Director of The House of Architecture (HDA), Graz from 2013 to 2019.

Founded in 1988, the HDA is a non-profit organisation focusing on promoting high quality architecture. The HDA’s work is based on the concept of architecture as a vital factor in the fields of culture, social policy, education and economics. The HDA aims to provide a platform for all branches of architecture, urban development and spatial planning and to act as a point of contact for all matters regarding building culture. The HDA’s activities include exhibitions, talks, workshops, discussions, symposia, educational series, excursions and publications.

Markus Bogensberger, former Director of the House of Architecture in Graz, on the Styrian model for achieving and maintaining architectural quality at a regional level and the evolution of his institution as an agent of inclusive change. 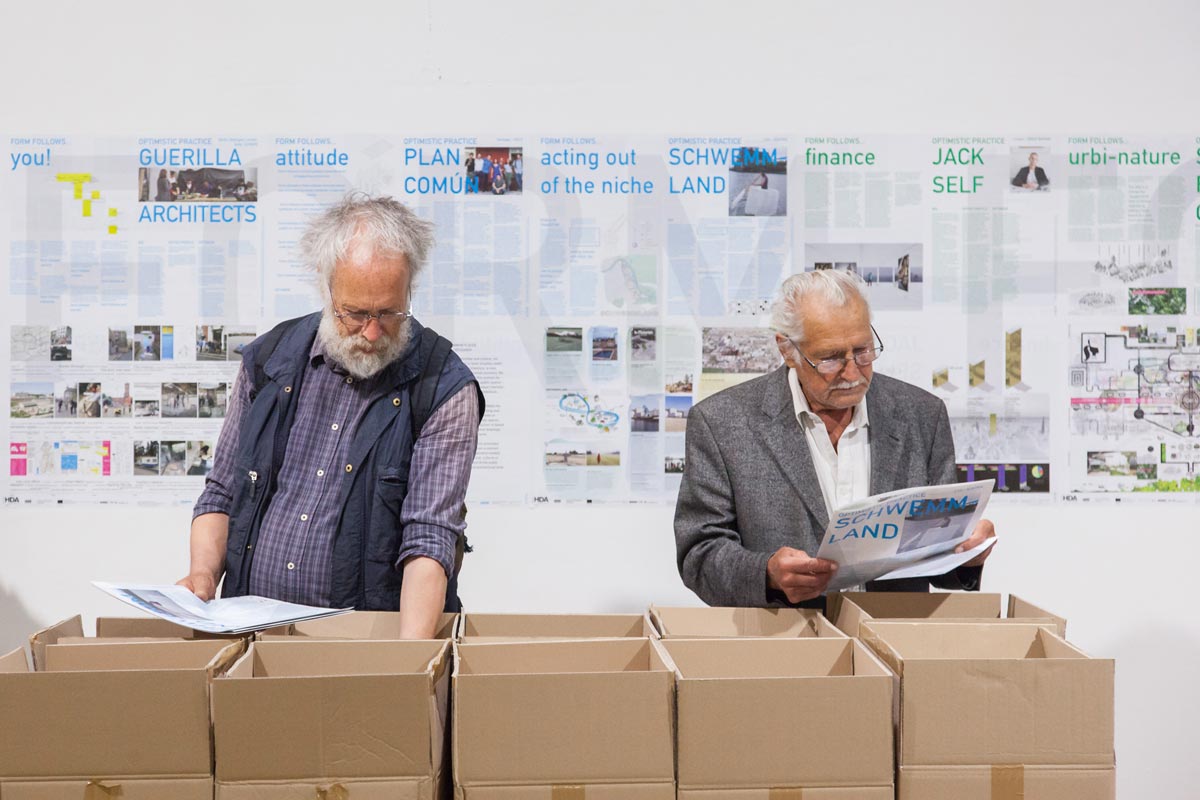 The Haus der Architektur (hda) in Graz, Austria, was founded in 1988 as a non-profit association dedicated to promoting architecture and high-quality building culture in the dynamic context of culture, social policy, education policy and economy. Accordingly, the purpose of the HDA is to act as an interface for architecture that is open to anyone interested.

The HDA came into being during a highly productive phase in Styrian architecture. A large number of high quality and often high profile projects were realised in the region at that time, particularly residential buildings, but also larger buildings for both public and private clients. This productive development was driven by architects, dedicated politicians and administrators, who already held positions in numerous organisations, engaging in an active dialogue with one another. From the outset, the HDA was sponsored by and conceived as a platform for the main institutions dealing with architecture in the region: the Forum Stadtpark, the Styrian and Carinthian Chamber of Civil Engineers, Styria Province, the City of Graz, the Graz University of Technology and the Central Association of Austrian Architects (Styrian section). 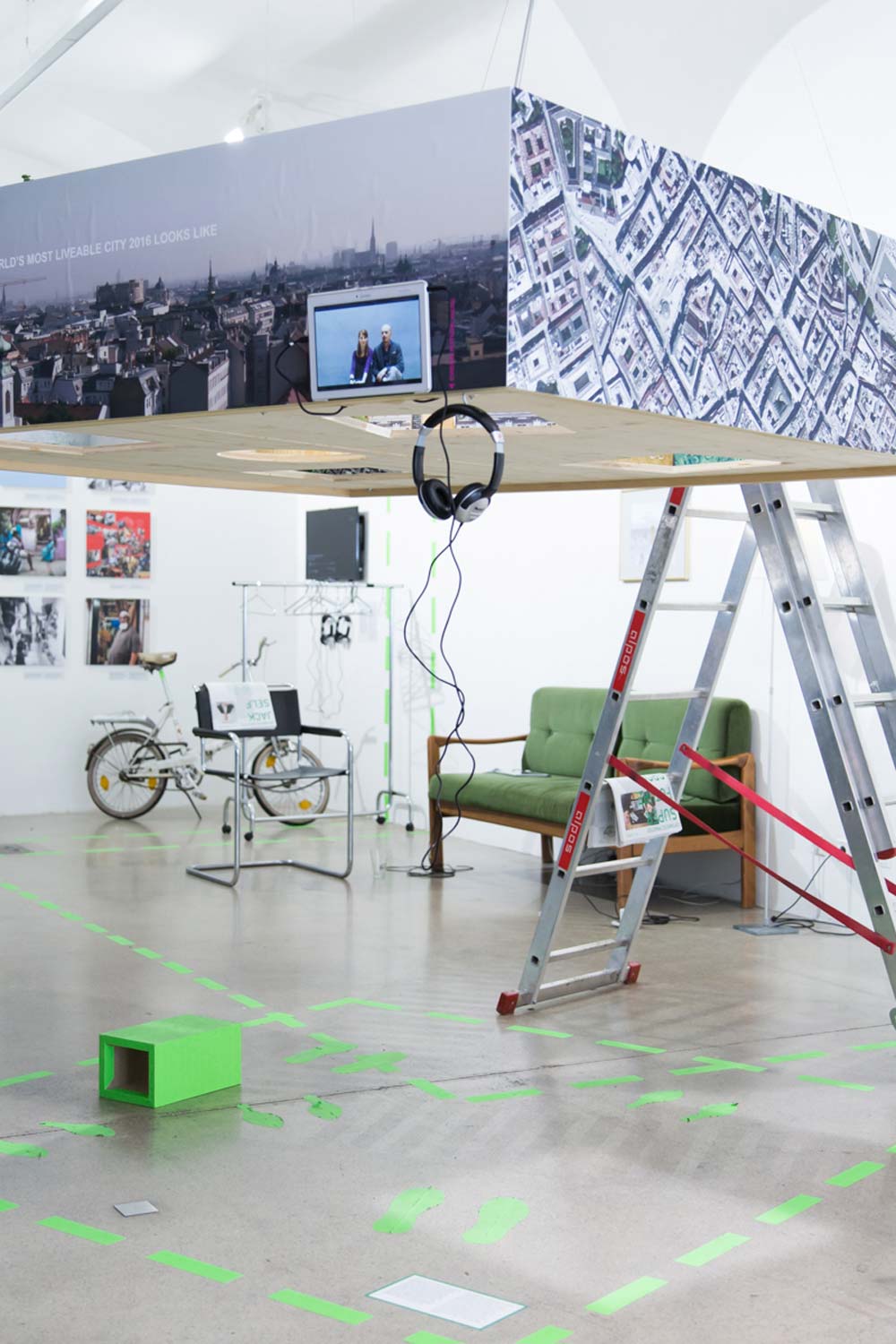 The positive attitude towards advanced architectural production in Graz in the 1980s was a development that could be traced back to the 1960s. It was during this period that political decision-makers recognised architecture and contemporary art as vehicles for ushering in fundamental processes of social renewal and transformation, and artistic practices were used as a medium for initiating a wide public discourse. Thus the Austrian “shock of the new” was triggered in Styria by the stimulating function of contemporary art production in genres that also included architecture, urbanism, fashion and film.

It is worth mentioning here that classical modernism in conservative southern Austria failed to become established either in terms of content or form prior to the Second World War – a situation which persisted until into the 1950s. Comprehensive exhibitions such as trigon 67 at the Künstlerhaus in 1967 with installations by Günther Domenig and Eilfried Huth were really what kick-started the new avant garde in Styria. trigon 67 was part of the Trigon Biennial series that was initiated in the 1960s to connect the Austrian discourse with artists from southern neighbouring countries like Italy and Yugoslavia, with experimental architecture in public space. trigon 69, for example, with an installation by Superstudio, sparked a heated debate, and helped to consolidate the long term role of architects in the cultural landscape.

Encouraged by progressive politicians and a vibrant young scene at the Faculty of Architecture at Graz University of Technology, numerous architects were able to set up their offices in the region. In addition, an extensive development programme for experimental social housing construction called Model Styria was launched in the 1980s and a large number of public buildings were built by young architects. Influenced by postmodernism and deconstructivism, this period saw the creation of an architecture known as the Graz School, that received much attention, at least in the German-speaking world.

The foundation of the HDA coincides with the apogee of this development and is the result of this extraordinary alliance of politics, administration and architects. From the outset, it was able to draw on an international network and wide-ranging contacts, holding summer workshops, for example, headed by such figures – then still young – as Peter Zumthor, Enric Miralles, Carme Pinós and Zaha Hadid. The Haus der Architektur model was subsequently emulated by a number of other Austrian provinces, with similar institutions being established in all provincial capitals (for instance the AZW – Architekturzentrum Wien – in Vienna in 1993). The foundation of the Austrian Architectural Foundation as a combination of Austrian architectural initiatives was also initiated by Haus der Architektur.

There was an early informal agreement on financing the HDA by the city of Graz, the province of Styria and the Republic of Austria. The province paid for the staff (and special projects) whilst the Austrian government paid for the programme and Graz contributed the location: a Gründerzeit (Wilhelminian style) villa with 1,000 square metres of usable floor space to hold workshops, exhibitions and lectures. The main target group, then and now, was the architecture scene comprising some 400 architectural firms and 2,000 students of architecture in Graz, along with individuals from administration and the media and people with a general interest in architecture.

Around the turn of the millennium, faced with dwindling political backing, people began to express the wish to make the activities of the Haus der Architektur open to a wider public. The club-like nature of HDA was increasingly seen as too elitist and the incipient international discussion of building culture was expanding the concept of architecture into a wider field of action. The decision was thus taken to relocate HDA to one floor in the Palais Thinnfeld in Graz city centre next to the newly built Kunsthaus Graz. Winners of a subsequent architecture competition for adapting the premises were Berlin-based ifau architects in collaboration with Jesko Fezer.

“The architectural institutions have an inherent potential to serve as laboratories for questions about the future.” 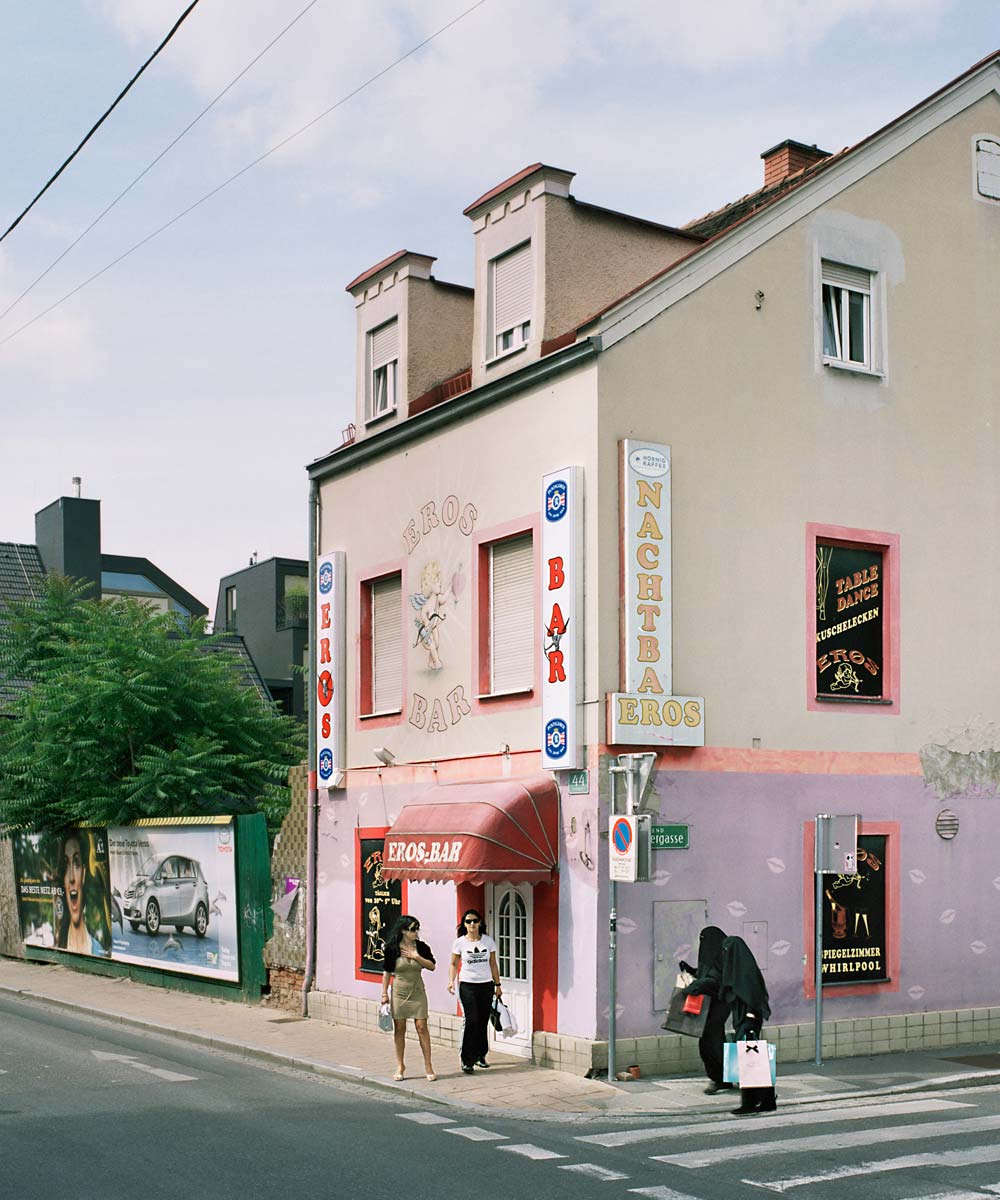 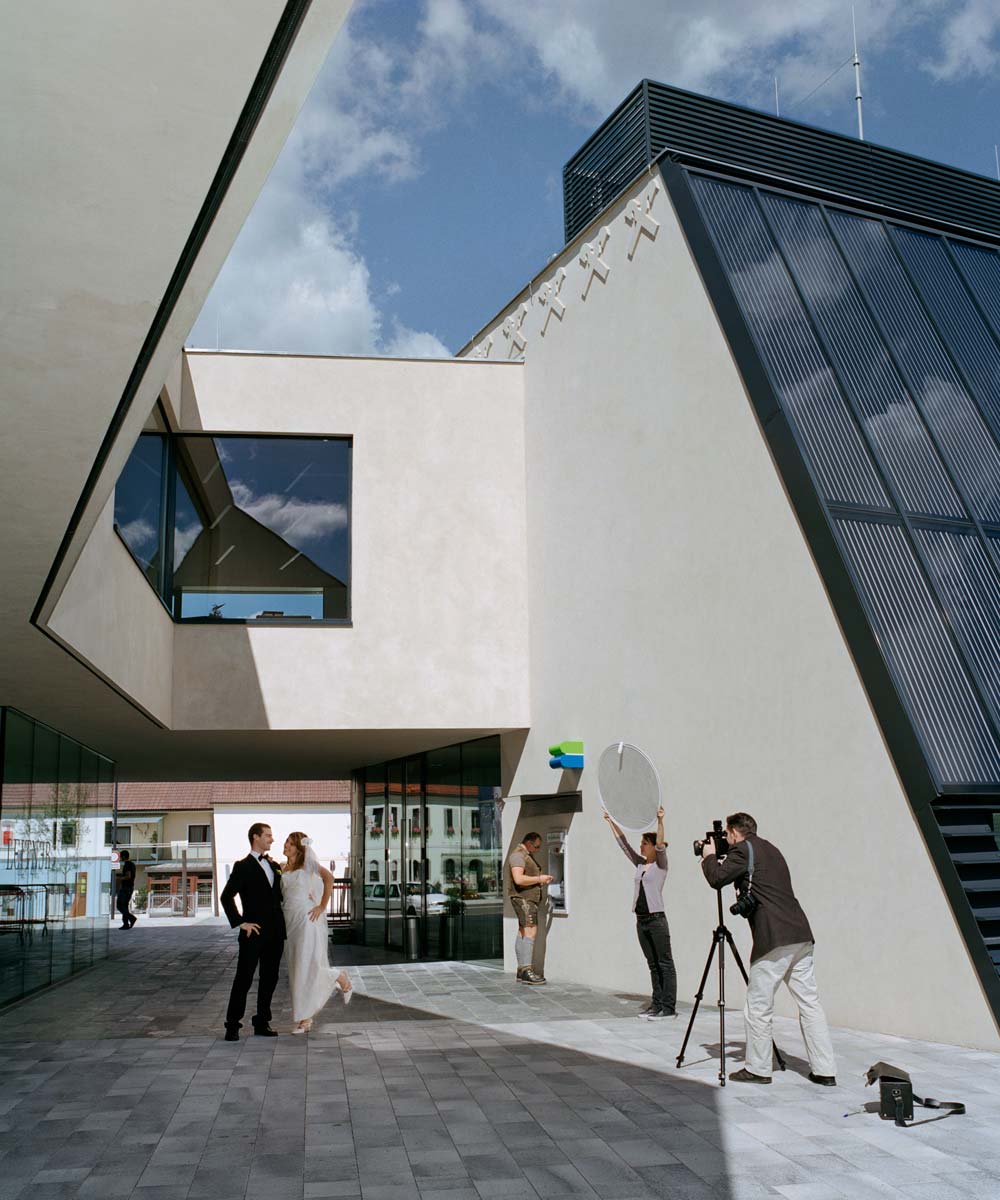 Of People and Houses, Architecture from Styria © Livia Corona

The brief specified that HDA, the exhibition rooms of Grazer Kunstverein and administrative offices of Universalmuseum Joanneum were all to be housed in the building. The design proposed a “radical compromise” that was to solve the anticipated cramped conditions for the three institutions by means of constantly changing and adaptable “negotiation rooms” for multipurpose use. HDA commenced its activities at the new site in 2009. However, the concept of flexible use of the entire Palais by all occupants proved to be rather impractical and became unnecessary when Grazer Kunstverein moved out. Therefore we are now restricted to one exhibition space and one office on the ground floor of the building. The corridor areas used by all tenants are occasionally used for lectures and discussions. Nevertheless, the location in the centre of Graz has proven a success, since the Haus der Architektur is now much more visible as a cultural institution in the city, being situated at an extremely lively site.

Past years have also been used to intensify networking with new partners. One successful project in this context was the Summer of Architecture held in 2015 when a large number of institutions and individual initiatives were invited to draw up a multifaceted, tightly packed programme of events. By clustering numerous events themed around architecture, the aim was to raise the awareness of a larger section of the population with regard to the range of subjects connected with building culture and thus to increase the relevance of a cultural examination of architecture in an extremely wide ranging and cost effective manner. More than 280 events were carried out by 120 organisers at 17 locations in Styria. During this period, the HDA, despite its small staff of just four, acted as a kind of festival centre, with numerous workshops being held here on topics including public space, architectural photography or architectural journalism. The events were very well attended and feedback from both the public and the organisers was extremely positive. A second instalment of the Summer of Architecture is scheduled for 2018. 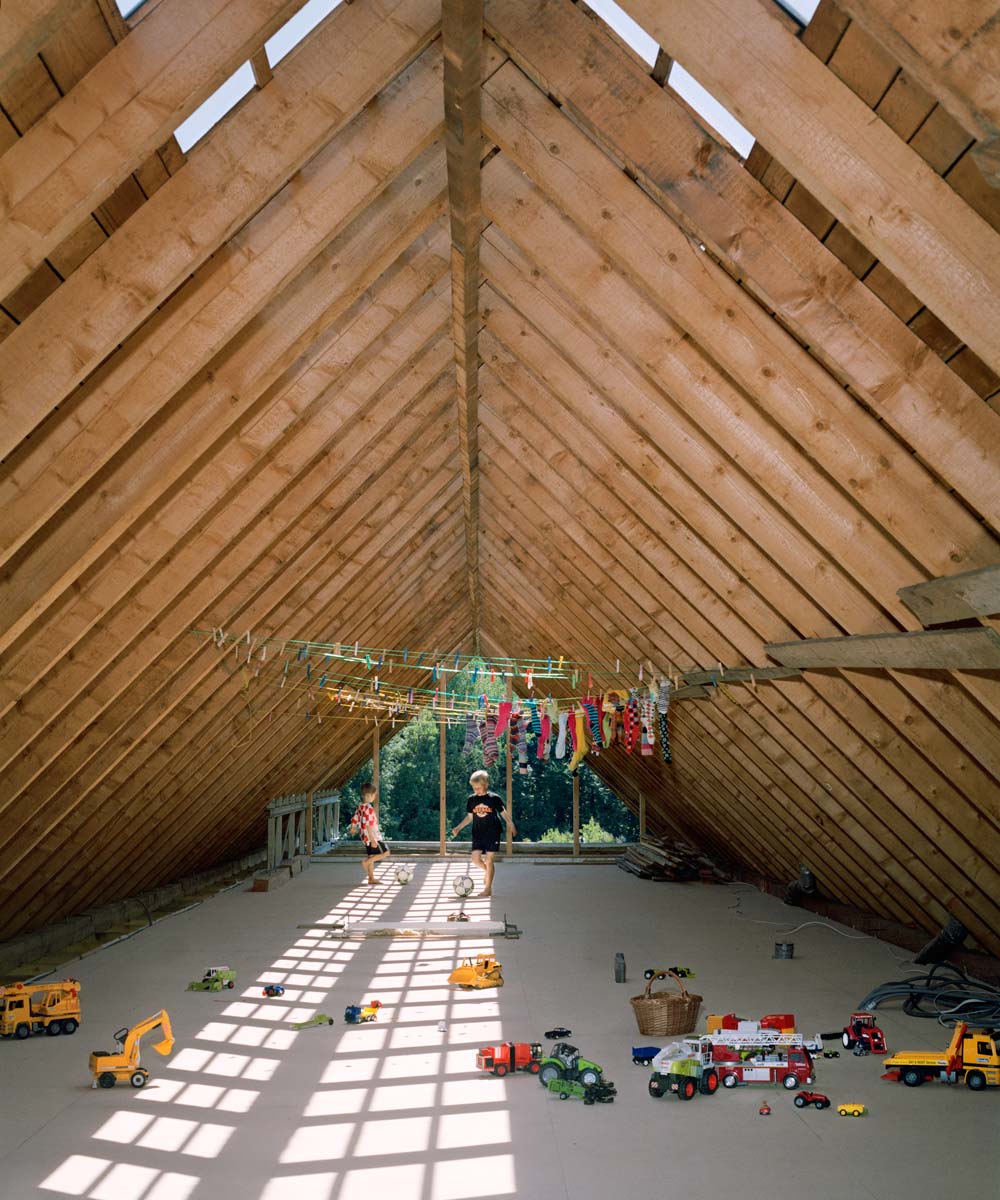 Of People and Houses, Architecture from Styria © Livia Corona

Every three years the HDA organises the Architecture Prize of the Province of Styria. The winning project is not selected by a jury but by a single curator, who is a distinguished personality from the field of architectural practice and/or architectural publishing. Recent curators included Andreas Ruby from Berlin, Hubertus Adam from Zurich, Natalie de Vries from Rotterdam and Tina Gregori from Ljubljana. In addition to the prize we produce the HDA Yearbook, which is also significantly influenced by the curator. Our aim is to document a wider view on the state of the art of architecture based on Styrian examples from the perspective of a renowned expert. 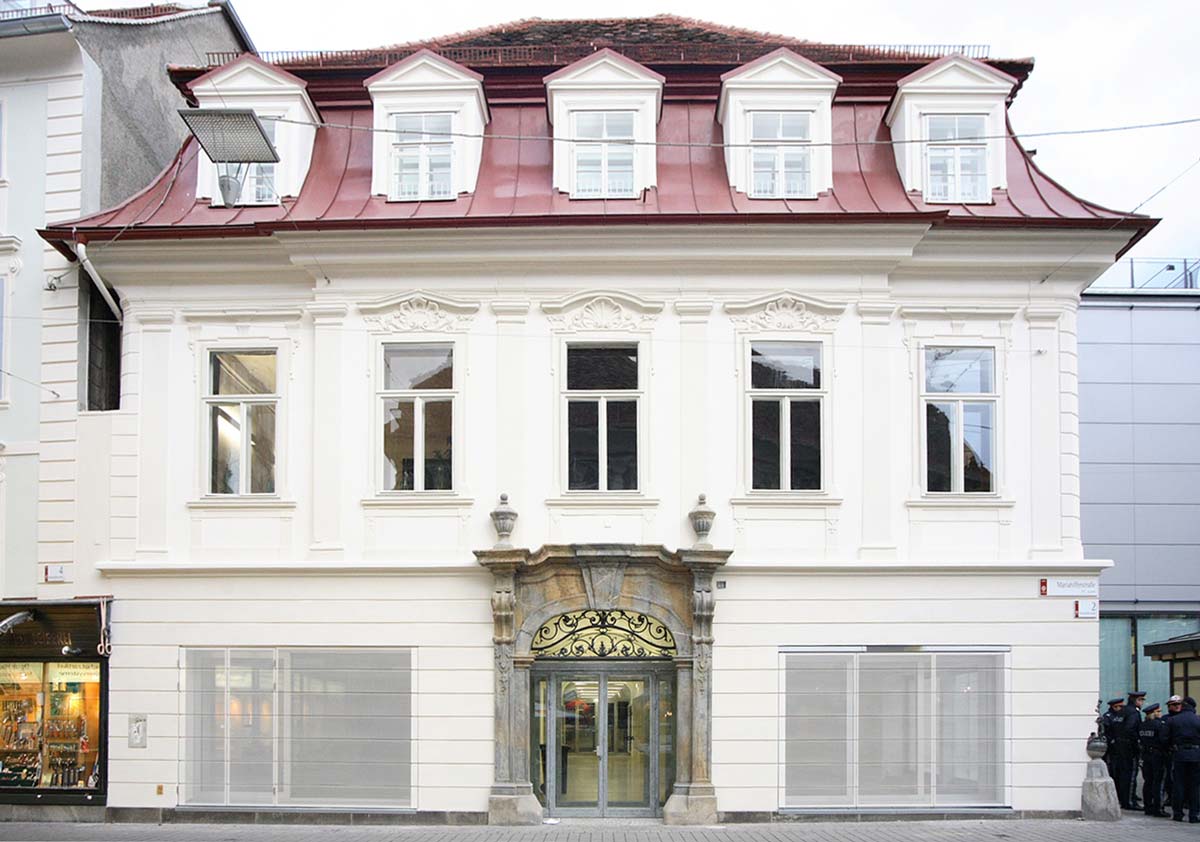 The question of the role that (relatively small) architectural institutions can play in a changing society has been a recurrent topic of discussion over the past years. The Danish Architecture Centre, for example, held a conference on institutions as “drivers of change”, the last Lisbon Architecture Triennale discussed the “Institute Effect”, and MAO in Ljubljana focused its architecture conference on the Institutional Act. All of these discussions were based upon the realisation that many contemporary processes of social and societal transformation manifest themselves in physical form and that these need to be both analysed and taken as starting points for regulating future developments. Thanks to their acquired expertise and generally extensive networks, the architectural institutions thus have an inherent potential to serve as laboratories for questions about the future. 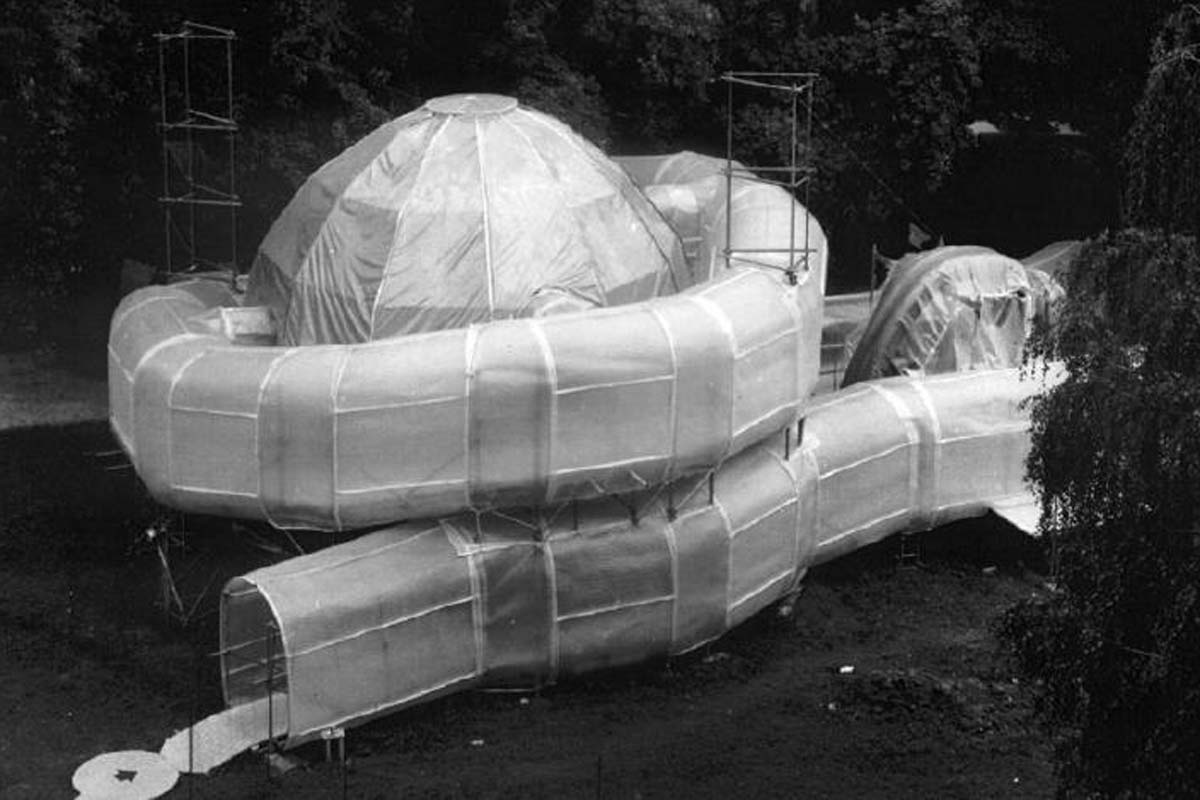 A recent trend towards two positions can be made out among these discursive organisations. On the one hand, the emergence of “agencies” that conduct professional participation processes, provide communication services for building projects, organise conferences, excursions and similar events, and market their services as being in the common interest. On the other hand, we can observe the appearance of highly community-driven initiatives that are organised in a less formal manner, that carry out temporary urban interventions (e.g. temporary uses). These often have premises that can be used for varying purposes such as co‑working, workshops and exhibitions.

Private institutions like ours are now facing the task of carving out a place for themselves within this environment as a place of communication and inspiration for the expert scene (architects, students) and anyone interested, while at the same time acting as a lobby for building culture in politics, administration, economy and media. This necessitates forging alliances with partners in a range of domains and networking stakeholders in order to better reflect positions on relevant topics. In this regard, the Future Architecture platform was, is, and will be, an outstanding basis for international networking and to carry this discourse to a European level. ■