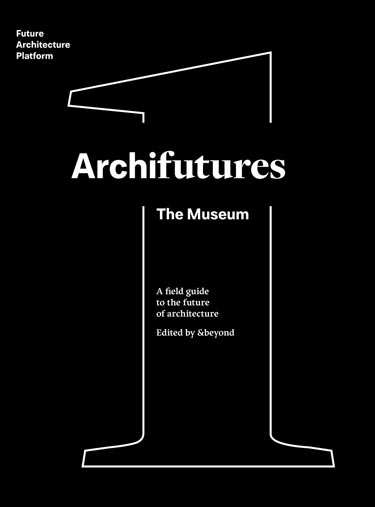 A field guide to communicating the future of architecture

The first volume of the collection maps the work of the institutions and organisations involved in communicating the new and innovative thought and practice leading architecture today, highlighting the strategies they use and programmes they run to support this.

Essays and interviews from the Museum of Architecture and Design, Ljubljana, the National Museum of XXI Century Arts, Rome, the Swiss Architecture Museum, Basel, CANactions, Kiev, Prishtina Architecture Week, Kosovo, the Lisbon Architecture Triennale and others give working examples of the roles that these organisations and institutions play in communication and education for those both within and beyond the field of architecture.

When we, the &beyond collective, were known as the uncube team making a digital magazine about “architecture and beyond” we spent a lot of time together thinking about patterns in complexity, investigating strategies for the future and seeking out those who were quietly doing things differently. And perhaps even helped change the idea of what an “architecture magazine” is in the process.

As a team we have never really been interested in big business, commerce or starchitecture, except in terms of the ideological shifts they may have generated or where they impinged on the world of the other 99 per cent – for good and for bad. For us, architecture is a deeply interconnected discipline and the nodes at which it interconnects with the unexpected, with people, with “the other”, with the future, has always held great fascination for us. So when Matevž Celik of the Museum of Architecture and Design (MAO) in Ljubljana approached us with the idea of creating a book for their newly initiated Future Architecture platform, we were very much drawn to the idea of becoming involved with this growing band of platforms, institutions and networks, many of whom are as well-versed in looking “beyond” architecture as ourselves – if not more so. And who better to publish this book with than our kindred spirits dpr-barcelona, who also happen to be equally devoted to pushing the boundaries of architecture publishing and seizing the potential for change in these strange times we are living in.

Founded in 2015, the Future Architecture platform is a young entity whose members are still discovering their potential together and still determining how to communicate what the platform actually is amongst themselves, to their audiences and to the general public. We at &beyond felt that the primary goals of this book, the platform’s first publication, should therefore be to clarify the Platform’s purpose, to act as a field guide to the wealth of knowledge and investigative potential that it contains and as a vector for the sharing of strategies, ideas and mechanisms with each other, with fellow network members and with their audiences – most especially not just other architects.

So to start with, we came up with not one book but three; three volumes in what we hope will be an ongoing series. For Archifutures Volume 1: The Museum, A field guide to the future of architecture, we looked at the strategies that the 14 founding members of the platform are adopting in order to address the future. Traditionally one thinks of institutions as being slow to change, somewhat phlegmatic, but the organisations here have been working hard on developing adaptive strategies to monitor, question, reflect, communicate and implement changes in architecture research and practice that are leading to exciting new iterations of this historic profession.

Almost without exception, these member organisations have come to realise that architects cannot afford to operate within a closed system bubble of “experts” who only talk to each other. Architecture is inextricably connected to the communities and (increasingly urban) environments in which we live. In order to build a better future, it is vital that we find better ways of communicating, sharing and empowering communities and citizens – as well as other organisations and institutions outside and within the discipline.

The primary objective has to be to improve the environments in which we live without detrimental cost to the natural environment or our fellow citizens. The commitment of architecture to humanity’s needs has to be reaffirmed – on all levels. To do this architects need to combine their skill sets with those of other disciplines to improve and change the systems that govern the present in order to prepare us for, and to build, a better future. As governments and the corporate and commercial world continue to lumber on within the confines of their more static modi operandi, it is often at the grassroots level, within local communities – both digital and physical – that change and innovation is being implemented with informal, bottom-up, self-initiated interventions that are having the most interesting direct impact. For the first time in our history, we have the tools to share successes, failures and lessons learned at a local level quickly and universally – and almost for free.

Thus, change is coming, the future is coming, through a myriad of tiny networks and systems. And it is a porous rather than an insular architectural response that is now needed. There is a lot at stake: to paraphrase Celik in his opening essay which introduces the Future Architecture platform: “the architecture of the future will not only be a practice that leads to the construction of buildings and artefacts, it will also lead the way to new fields in which to operate”. This is the vision that the participating institutions in this book share. The purpose of this and subsequent volumes is to communicate their strategies for going about it.

In an interview with architecture journalist Nick Axel, for example, curator Michał Duda explains how the Wrocław Museum of Architecture in Poland perceives their primary function to be that of paying back of their debt to the community that funds them, through the presentation of their collection but also, more importantly, through education by reaching out “beyond the thick museum walls” to both young and old with an ongoing series of pedagogic initiatives.

Andreas Ruby, the new director of the Swiss Architecture Museum (S AM) in Basel, also talks about drawing in visitors across the threshold but in this case by taking the museum out onto the streets of the city and thereby inverting the idea of a “collection” to encompass the surrounding built environment and thus making the S AM “a museum of the city too”.

Architect and curator Ana Dana Beroš is the organiser of a series of guest lectures by leading new architecture theorists at the Oris House of Architecture in Zagreb in Croatia. Her aim with the series is to encourage, via new interventionist tools, a move from building statements to building communities, brushing alongside the (currently back in vogue) theme of utopias in the process. 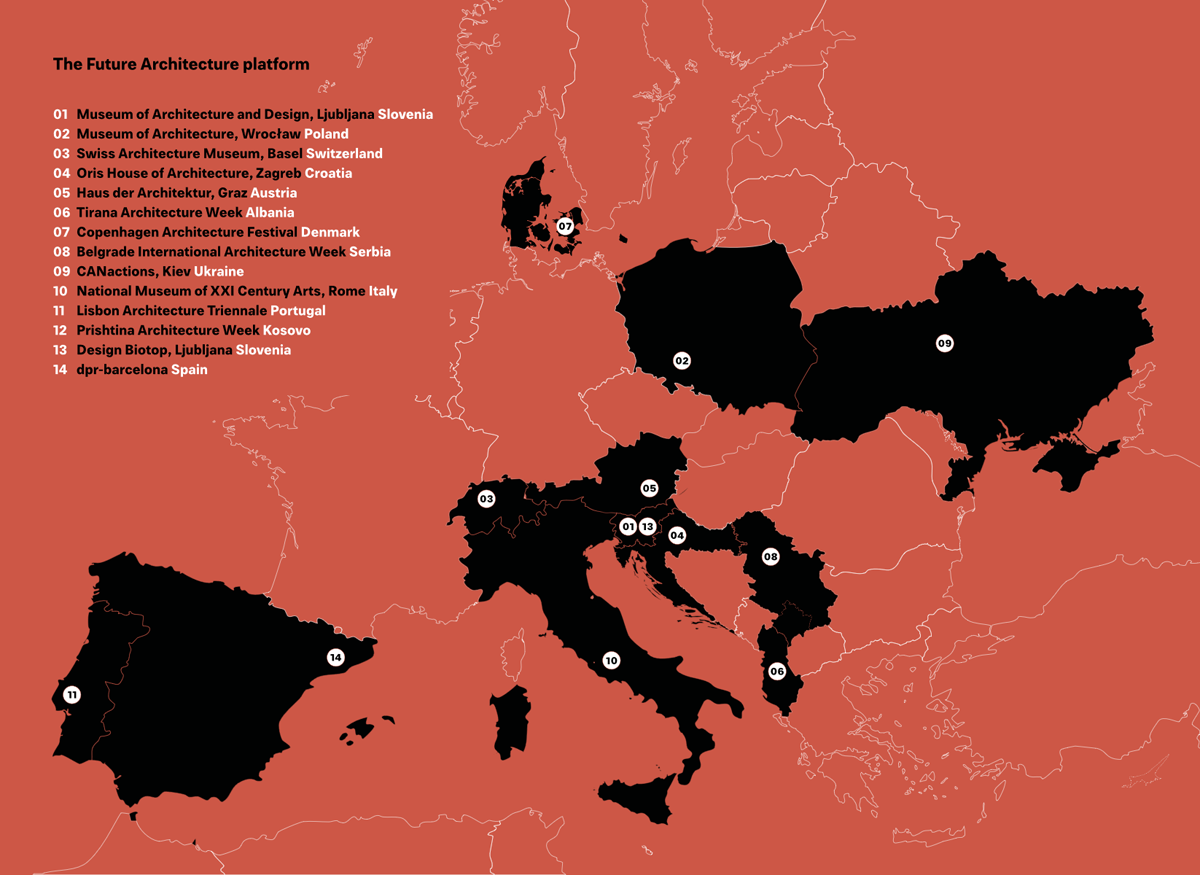 Markus Bogensberger, Director of the House of Architecture in Graz, Austria, views his institution as an interface between the arts, building culture, the public, politics, social policy and the economy: working with the established system to increase understanding and awareness in the context of a region that has been officially open to architectural experiment since the 1960s.

In Beyond the Biennial Bubble, architectural historian Léa-Catherine Szacka talks to three organisers of three young architecture festivals in Belgrade, Copenhagen and Tirana about their motivations for instigating iterations of a growing breed of festival formats, all of which are focused upon connecting with the urban environment, providing further evidence of this drive to open up and connect architecture with the city, its culture and its citizens.

Not all of the platform members are museums and festival organisers. &beyond’s Rob Wilson talks to two initiators of the CANactions School for Urban Studies in Ukraine about their inclusive approach to postgraduate education that combines students from the fields of architecture, engineering, sociology, graphic design and journalism acknowledging the fact that the issues facing us in our cities are way beyond the scope of one discipline alone. Their pioneering approach is to develop new, dynamic interdisciplinary tools to address urban development and implement change in a country experiencing tough challenges at present.

In 2016 the MAXXI National Museum of 21st Century Arts in Rome hosted an exhibition of the work of Superstudio, a radical and highly influential Italian group who began questioning the architectural status quo back in the 1970s. Especially commissioned for this book, Cristiano Toraldo di Francia, co-founder of Superstudio, entered into a visual dialogue with Guillermo López, co-founder of the young Spanish practice MAIO, in the form of a conversation in collages. The resulting exchange questions the nature of architecture programmes and the hierarchy of spaces, and brings our contemporary idea of the future into vital dialogue with utopian ideas of bygone generations.

A fascinating discussion between André Tavares, co-curator of the 4th Lisbon Architecture Triennale, and architects Mariabruna Fabrizi and Fosco Lucarelli of Microcities about the Form of Form focuses upon Tavares’ call for the architecture profession to “reclaim its authority” as an open activity that is useful to society. Change is in progress and architects, he says, need not only to be instrumental in that change, but at the forefront of the new “forms” that are arising and will arise from it.

On a more practical level, Bekim Ramku, the head of the Kosovo Architecture Foundation, talks about the Prishtina Architecture Week in the context of inclusivity and the strategies they employ to get the general public and professional architects to interact with one another with physical results that benefit the local community as well as local architecture students.

The only design-based member of the Future Architecture platform to date, Ljubljana’s Design Biotop provides a distinct approach by focusing on new kinds of design thinking and participatory practice. Saša Kerkoš, the platform’s initiator, talks us through the value of problem-solving through data analysis and system design in the public sector, which has the potential to influence strategy and funding at a national level.

Last, but not least, Fiona Shipwright and myself from the &beyond editorial team take a long hard look at architecture publishing in an interview with Archifutures’ publishers dpr-barcelona (an architect duo who predominantly practice in the realms of publishing, criticism and curating). The key to developing a new way of classifying and working within the situation of dynamic complexity we now find ourselves in, they say, is to “decode our imaginary from the [static] concepts we learned in the past” and thereby embrace new models that are based on distributed networks.

We all know it’s hard, but the future has to start somewhere and we already have one foot in the garden of forking paths that leads there. Here’s hoping that this debut volume in our series of field guides to the future of architecture – featuring a first set of expert travelling companions – can provide some small assistance in choosing which routes to take.

On reaching the public and learning from mistakes

Taking the museum out of the building and into the street

The Oris lecture series in Zagreb

Beyond the Biennial Bubble

Interview with Urs Thomann and Vladyslav Tyminskyi by Rob Wilson

On shaping the architectural debate

The challenges of inclusivity

The Alchemy of the Wor(l)d

Some ideas about plausible futures in architecture publishing