The challenges of inclusivity

By facilitating the participation of the local community throughout the planning and intervention process, things can change for the better.

The fourth edition of the Prishtina Architecture Week (PAW), which for the first time was jointly organised by the Kosovo Architecture Foundation (KAF) and the Future Architecture platform, was held from July 4-10, 2016. With a total of 31 individual activities – such as debates, conferences, exhibitions, interventions, screenings, tours, open houses and studios, 16 lectures and six workshops – it proved to be a successful and popular edition, with the festival attracting more than 4,000 visitors and participants.

A regionally organised week of activities centred around architecture can serve as a nexus of change and exchange across a far broader platform. Architecture weeks can also help those professionally involved with architecture to get closer to that elusive goal of deeper levels of interaction with the general public which is so often inhibited by institutional thresholds. Bekim Ramku reports upon the activities of the fourth Prishtina Architecture Week and explains why regional inclusivity is a thing.

Prishtina Architecture Week is the only event of its kind in Kosovo and is one of the biggest in the region. To date, across four editions, we have had more than 80 architects, planners, designers and filmmakers present their work in front of a Kosovar audience, totalling more than 20 workshops with over 400 participants, 15 exhibitions, 20 open houses and studios, several tours, 18 screenings and one international competition.

For 2016, we chose the theme of Inclusivity, as over the past few years we have identified the need for a bigger participation of the general public and in particular, marginalised groups. Thus for this edition we searched for practices and collectives that root their work in a participatory ideology. We invited figures such as Elena Madison (Project for Public Space), Tomaž Pipan (TU Berlin), Merve Bedir (Land+Civilization Compositions), urban planners Nela Kadic and Vera Seriakov and members of the Brussels-based non-profit Toestand. In total 16 speakers and tutors were invited to share their experience and knowledge with the audience that comprised both regional attendees as well as those from other parts of Europe. 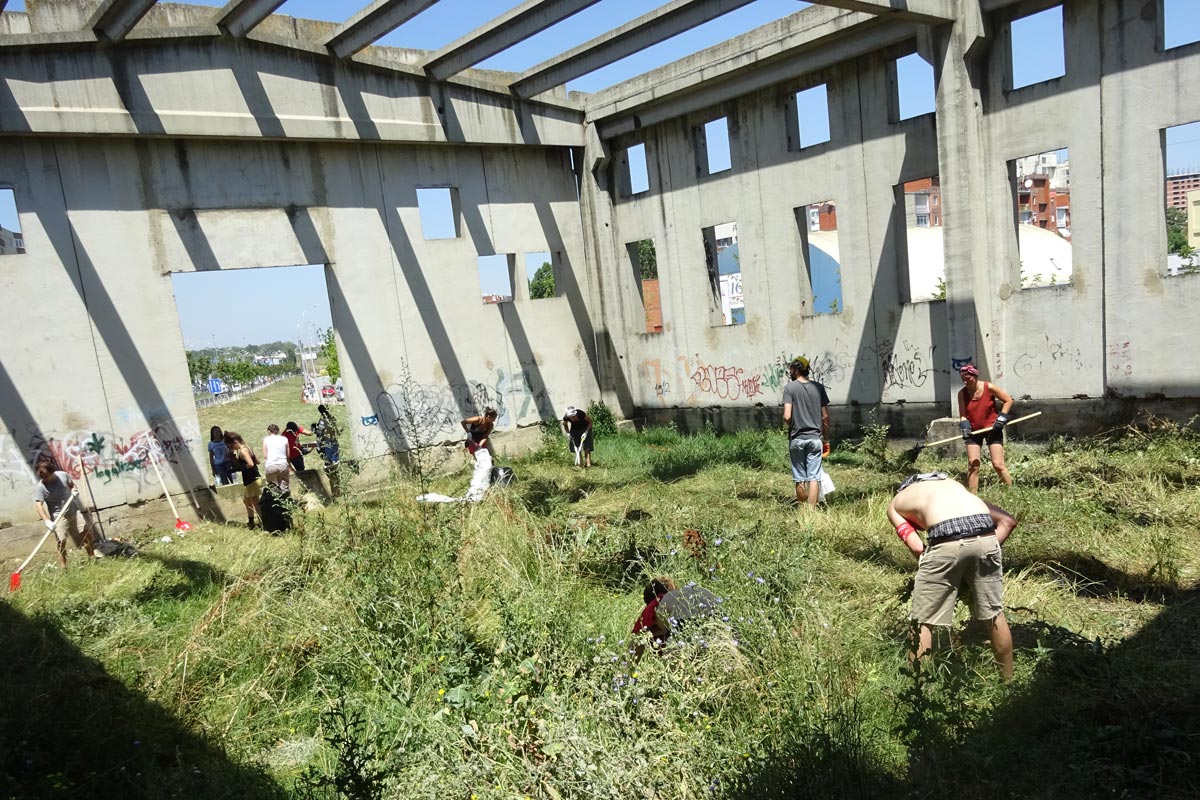 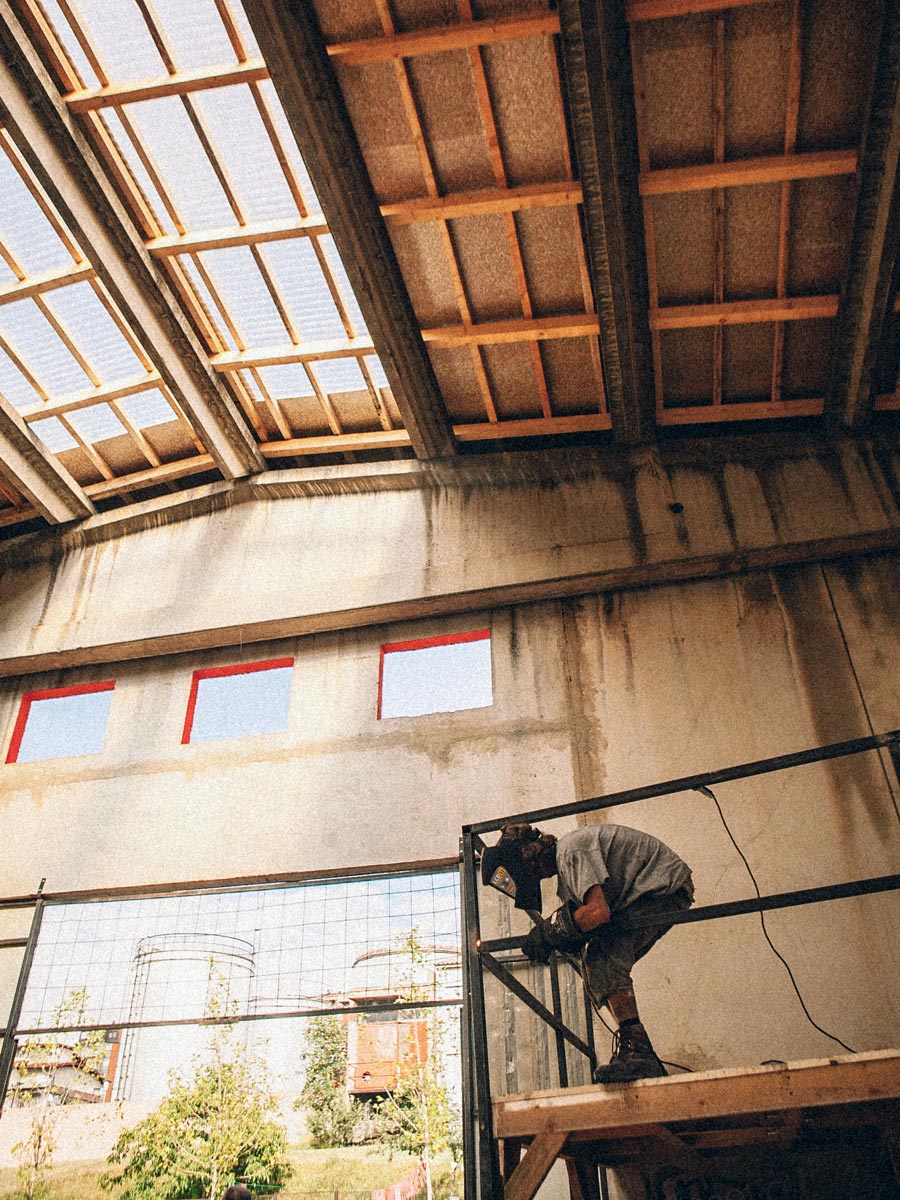 More than 150 members of that audience took part in the six workshops held during the festival. Students had the chance to learn more about the placemaking methodologies pioneered by the Project for Public Space, integrating ethnic minorities in urban planning, alternative readings of the city and together with Toestand and Mache (Basel) planned and adapted an abandoned building in Prishtina into a community centre.

Among the most important issues raised during the week were those that came out of workshops in two of the neighbourhoods that are home to the Fushe Kosova minority. Both suffer from an extreme lack of public space, having never been included in any kind of neighbourhood or city planning in the past. As a consequence, there is a sense amongst the population that they are not the owners of the communal spaces that surround them. The workshop, headed by Bence Komlosi of dotlinearchitects, proved that by facilitating the participation of the local community and actively involving both young and the elderly residents throughout the planning and intervention process, things can change for the better. 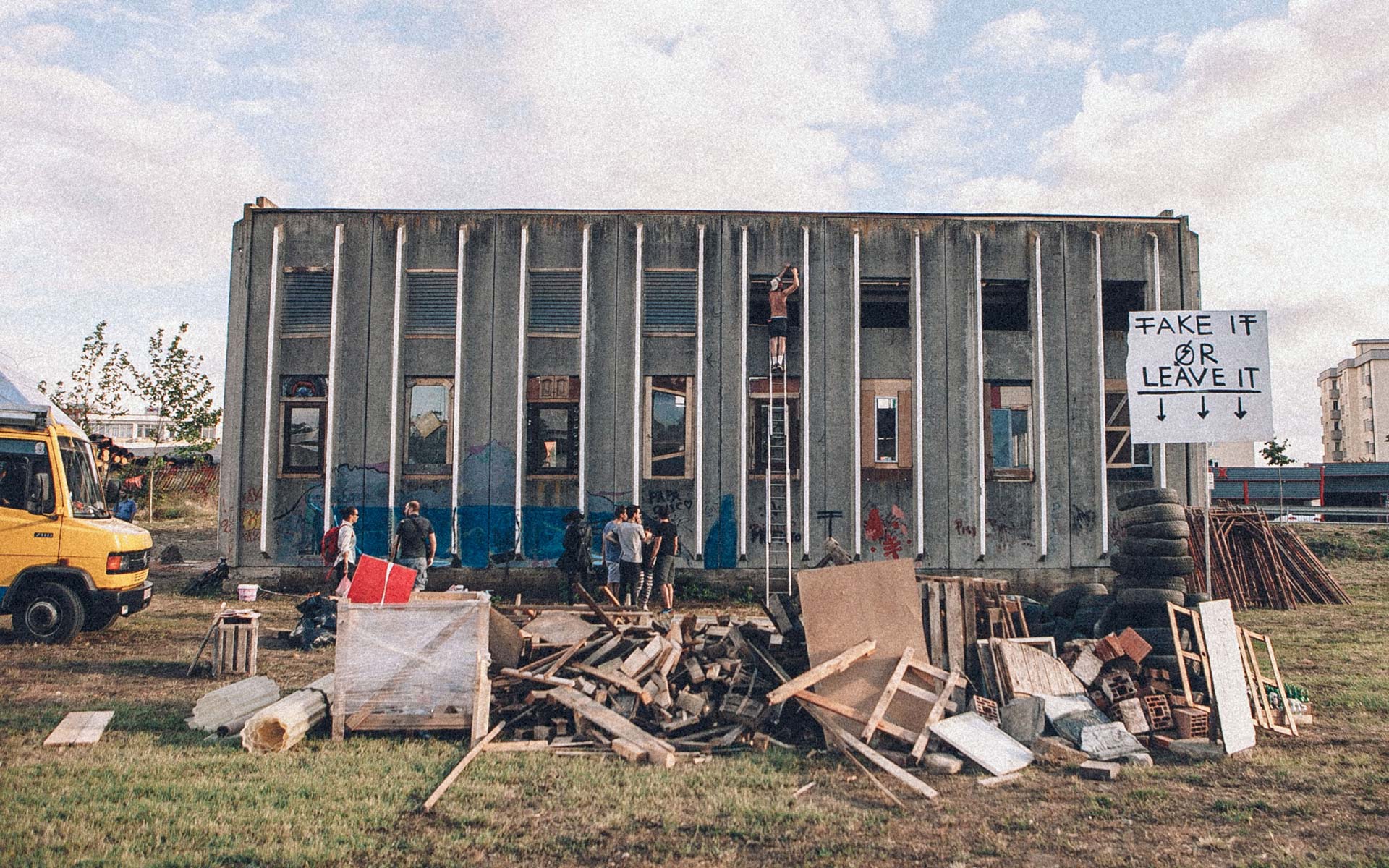 Similar conclusions could be drawn from the presentations by Pipan and Bedir, who both showcased examples of community involvement in urban planning. Bedir focused on the tensions along the Turkish-Bulgarian border and looked at how communities on both sides could blur divisions by joining forces. Pipan presented numerous participatory processes that he had been involved with, such as the planning of public spaces in a Chinese neighbourhood, or the reuse of abandoned structures for local communities in Detroit. 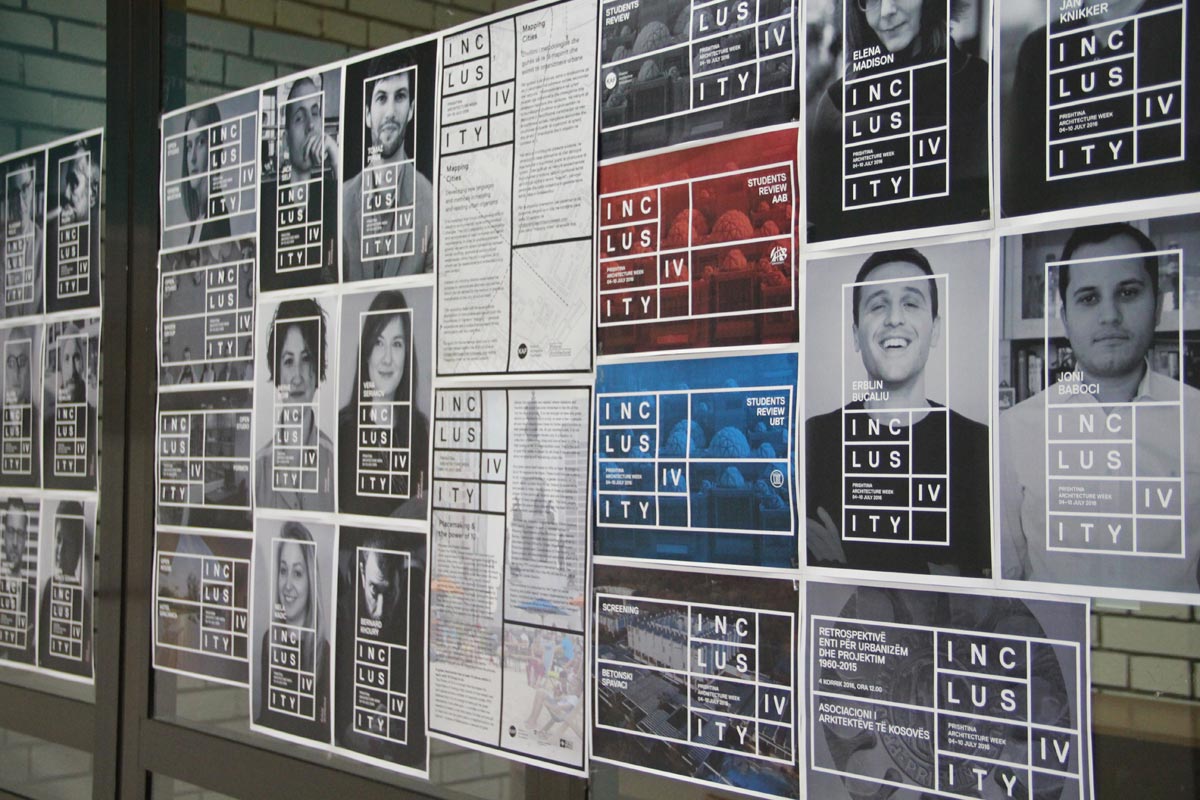 The Toestand-Mache urban intervention that transformed Prishtina’s Termokos building also proved to be very successful. The two collectives brought more than 60 young people with them to work with more than 40 Kosovars who joined the initiative. The structure was initially built in the late 80s as a substation for the Prishtina district heating company Termokos. However, it was never completed and was abandoned until now. The two collectives, together with the KAF, proposed that it be finished (initially for temporary use) with materials that could be found throughout the city. In just ten days the empty structure was turned into a space to serve the local community and play host to a range of activities. A local group of young people have since been working on establishing a set of such activities, with a focus of creating a programme for the capital’s arts community.

One of the biggest challenges for the organisers of the event is the lack of permanent space for the Prishtina Architecture Week and KAF activities. Since the establishment of the Foundation in 2012, KAF has been actively searching for a space that could accommodate not only the festival’s activities but, with increased capacity, could also allow for a more flexible programme extending up to a month; it is always difficult to pack a festival with more than 30 individual activities into one or two weeks. Aside from extending the Week into a month of architecture, we are very interested in the possibility of extending it beyond Prishtina. We believe that the quality of the work produced during the PAW should be acknowledged and we will continue to try and distribute it throughout the year so that more people in Kosovo and beyond can have access to it.

As a way of informing not only the architecture community but also the general public, we will be holding informative presentations outlining the last festival across several cities in Kosovo. We are also very interested to learn more about the needs and issues that other parts of the country face and to concentrate our future workshops in those areas. Similarly, as with past editions, we will select several lectures to translate into Albanian for those who do not speak English.

“In just ten days the empty structure was turned into a space to serve the local community and play host to a range of activities.” 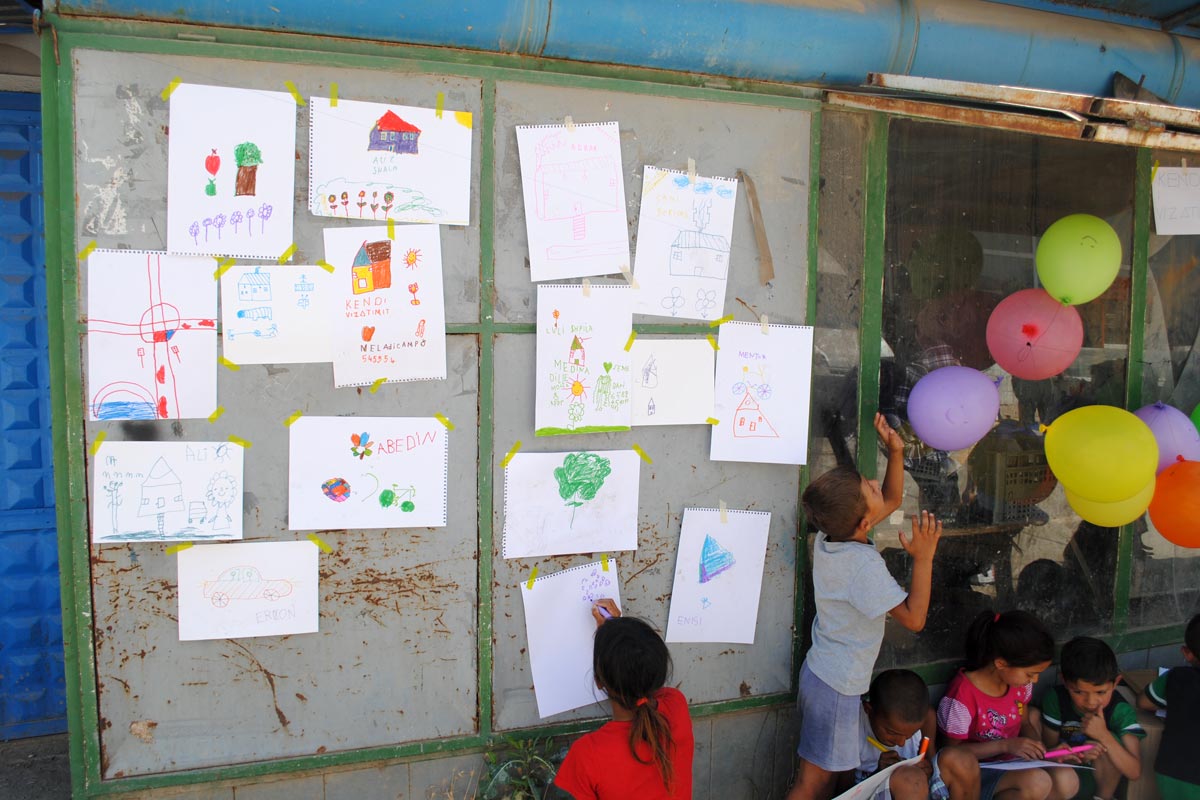 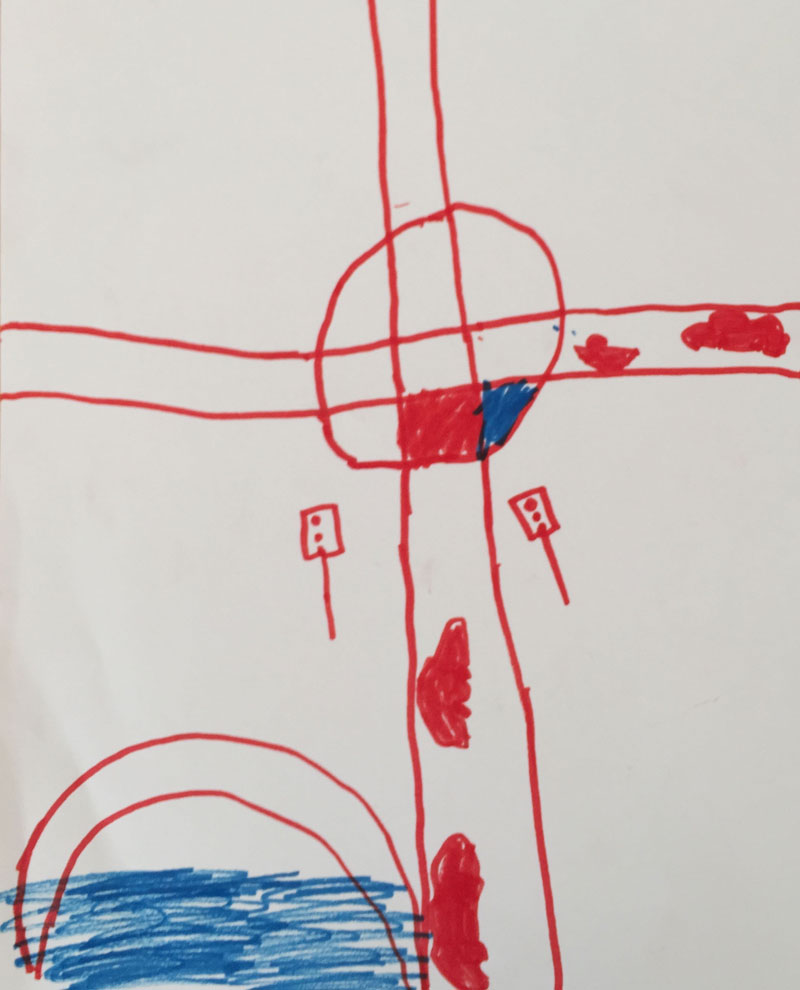 As the only event of its kind in Kosovo, the importance of such an initiative is manifold and stems from the reason why we started it in the first place: the students. Kosovo is one of the poorest and most isolated states in Europe and therefore few students can afford to travel abroad to biennales or similar events and follow lectures by interesting architects. It is unimaginable to some, but until we invited Winy Maas of MVRDV to lecture here in 2012, not a single “world-renowned” architect had given a lecture in Kosovo.

Though still a young festival, in only four editions PAW has drawn figures such as Alejandro Aravena, Sir Peter Cook, Elia Zenghelis, Enric Ruiz Geli and many others to its programme. Likewise, workshop hosts have included MVRDV, Urban Think Tank and the New York City Planning Department and exhibitions have been curated by Rome’s maxxi Museum and the Aga Khan Award for Architecture. It is amazing to see from the Students Review exhibition how things have changed in such a short period of time, with students demonstrating how they were influenced and in particular the ways in which they are using new methodologies and tools picked up from the workshops.

We are permanently engaged in promoting the profession of architecture and the importance of the built environment on all our lives. We are very positive that the Prishtina Architecture Week is steadily growing into an established festival that will continue to engage a growing audience from both the local region and across Europe. In doing so it will facilitate even more cohesion and collaboration between the young professionals of our continent. ■

“Kosovo is one of the poorest and most isolated states in Europe and therefore few students can afford to travel abroad to biennales or similar events.”

Bekim Ramku runs an architecture and urban planning office in Prishtina and is head of the Kosovo Architecture Foundation and the Kosovo Office for Urban Regeneration. A graduate of Prishtina University in 2007 and the AA School of Architecture in London in 2010, he founded and served as director and curator of the first Prishtina Architecture Week in 2013.