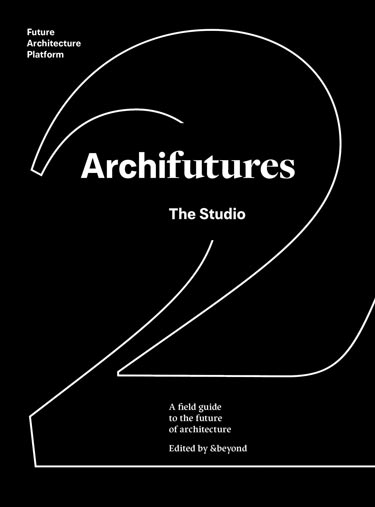 A field guide to speculating upon the future of architecture

If you want to change the world, you need to start with great ideas. This volume focus in particular is on the cutting-edge thinking and wider theoretical questions and themes that underpin the series, from reflections upon what our ideas of “future” really mean to the changing role of the architecture profession as a whole. Comprising speculative visions, essays and texts, this volume serves as a theoretical backdrop for the practical approaches seen in Volume 3: The Site.

Setting out the future of anything in this era of uncertainty is no mean feat. The very idea of crisis – whether that be social, economic, environmental or political – is now so worn out that we need a new term to encompass the perpetual nature of these catastrophes which erode the whole notion of a future. Aren’t crises supposed to end?

In architecture, this sense of an ambiguous and unsettling future has manifested itself as polarisation. In cities across the globe mega-projects for mega-profit proliferate cheek by jowl with inadequate and insufficient housing, where architectural intervention is often limited to a pop-up, a paint job or a re-paved public space. The report from the front that was the 2016 Venice Biennale implored architects to offer a “new point of view” on the social challenges of the era, but much of what emerged was a blurred cacophony of good intentions competing for attention with palazzo pomp.

It seems the solution for our futurist myopia must come in a reconfiguration of what “the future” actually means. So reliant are we on twentieth century cultural constructions of the future (predominantly disseminated through a US and UK anglophone lens), that we now find ourselves stuck with an outdated image of what’s to come (see endless additions to the Star Wars franchise) that has been outgrown by the realities of our world today. Instead of rehashing futuristic visions of technological utopias in hyperreal renderings, we must first ask what it means to imagine our future at all.

In architecture this will mean a deconstruction of the profession itself and the embracing of the a-disciplinarity which continues to break down the roles of designer, engineer, activist, amateur and so on. Helping us navigate the way into this amorphous future, pick apart where things went astray and relocate a vision for our collective tomorrow, this volume’s contributors lay out their conceptual approaches to the future of architecture. Following the institutional approach of Volume 1: The Museum, Archifutures Volume 2: The Studio presents a collection of theories that will inform the practice and discourse of architecture and urban design in the years to come. Incorporating economics, sociology, illustration, digital media, ecology and more, The Studio is a multivalent handbook to aid in understanding the future of the built environment.

We begin with Ana Jeinić’s insightful diagnosis of our current, confused relationship with the future. Stuck between the grim forecasting of social, economic and environmental catastrophes and the “future is now” ideology of financialised capitalism, European society has, by and large she says, retreated to nostalgia. In the midst of this post-futurist present Jeinić draws out the role of architecture in signalling and subverting the crises of today, pointing to a better tomorrow.

OMA’s Reiner de Graaf follows with a neat, if sobering, companion to Jeinić’s breakdown of the future, in an essay that calls into question everything we thought we knew about the past. If the free-market economy is taking us straight back to the dark days of extreme social and economic inequality, then perhaps the enlightened period of twentieth century modernism was no more than a delusional, historical hiccup. Architecture, he says, is now a complicit tool of capital. What further proof do we need of the urgency for action and self-critical reappraisal?

Taking up the reins, Cristina Ampatzidou and Ania Molenda, founders and editors of online publishing platform Amateur Cities, pin their hopes for a system of future coexistence on amateurs; the everyday users of cities whose actions produce urban space through peer-to-peer networks, the commons or simply embedding themselves in their local communities. For this volume the pair have turned the interview format on its head, subjecting themselves to questions from collaborators such as Tobias Revell and Brendan Cormier to open up a discussion on utopia, Charles Darwin and the task of bringing critical thinking back to architectural discourse.

Tiago Torres-Campos takes a wide-lens perspective on the future of environments both built and natural. With an unflinching reflection on the impact of humans in the age of the Anthropocene, he calls for a redefinition of landscape as a term. Incorporating our globalised consciousness that has outgrown the limitations of borders and boundaries, Torres-Campos sees instead a scalar system of territories from the local to the trans-national that reimagines our ability to coexist sustainably on this planet.

In a passionate rebuke of “contemporary architecture’s most toxic substances”, architect and theorist Clément Blanchet has produced a manifesto of sorts. Provocative and intriguing, Blanchet forces us to question what has been really learnt from architecture over the past thirty years? How do we recover from an overdose of “beauty”? And what’s wrong with nostalgia anyway?

Reporting from the front in Gezi Park, Istanbul, Merve Bedir takes the eruption of demonstrations against the Turkish government in 2013 as a case study through which to relocate hope and envision a new urban society based around the commons. Friendship and support are at the heart of her theory that sees the city not as a product of physical infrastructure, but instead as a network of coexistent beings.

In New Models of City Life, Tomaž Pipan identifies how urban culture has been eroded via dereliction or crassly manufactured via the Disneyfication in deindustrialised cities across the Global North. His optimistic vision for the future of these cities rests on the return of manufacturing industries to urban centres in order to reinvigorate the “production cultures” that dissolved when industry left town.

No contemplation of the future would be complete without a dive into the digital. In Occupy Facebook! Davide Tommaso Ferrando provides us with an antidote to the mindless online content stream with a manifesto for using social media as an instrument for serious architectural criticism. Seeking to create meaningful communication, Ferrando follows a strict editorial procedure to manage his own social media profiles – don’t expect any selfies.

A second manifesto forms the visual cornerstone to this volume – this time from the Berlin-based design practice Something Fantastic. Speculating in word and image, Something Fantastic muses on density, painting, elegance, Arcadia and the low-tech simplicity of “heavy things”.

Rounding off the volume, in an interview with curator and critic Shumi Bose, speculative futurist par excellence Liam Young calls into question the meaning of nationhood and citizenship while provocatively calling for the “dissolution of the term ‘architect’”: a convincing argument for inter-disciplinarians such as ourselves.

In these entangled times, it is becoming ever-harder to find clarity in the clamour of information we consume daily. It is our hope that this volume will provide a space for some clear and critical thinking and illuminate some sorely needed potential routes into the architectural tomorrow.

Where Have All the Flowers Gone?

Architecture after the future

The Century that Never Happened

Was modernism just a glitch?

A platform for collective intelligence on city-making

Landscapes of the Anthropocene

The potential of ruins or the ruin of potential?

What Doesn’t Kill You Makes You Stronger

A prescription for contemporary architecture

The case for reshoring production culture

Architecture hence will be something fantastic

What Am I A Citizen Of?