Landscapes of the Anthropocene

The Pacific Trash Vortex, the nuclear disaster in Fukushima, Three Gorges Dam in China and the first environmental refugees are no longer science fiction but rather dystopian realities that were caused by human‑induced change.

After spending five years working in a landscape architectural practice, Tiago Torres-Campos joined academia in 2012 and is now the programme director of the MA in Landscape Architecture and a Visiting Teaching Fellow at the University of Lisbon and lecturer at the University of Edinburgh.

His current PhD in Architecture by Design investigates the potential of the landscape as an immersive experimental field to ontologically define time. Other relevant research fields include landscape representations in the Anthropocene and the effects of digital media on contemporary perceptions of landscape.

Torres-Campos is also the founder of CNTXT Studio, a research-by-design platform focusing on the intersection of landscape with architecture, art, design and digital media.

Landscape architect Tiago Torres-Campos issues a call for a redefinition and re-evaluation of our notion of “landscape” in the face of the irreversible environmental changes that are upon us.

“On the Earth one sees all sorts of things”
The Little Prince, Antoine de Saint-Exupéry

Look through the kaleidoscope

Breathing through a cloud of pollution; weird cough and skin allergies. Navigating through radioactive waters; paranoia through the looking glass. Driving through a flooded city; we shall not pass. A cascade of first-hand experiences.

My Chilean friend hums “It’s the end of the world as we know it” as he updates me on his neck of the woods: thousands of salmon die caged in aquaculture; thousands of dead sardines float along the toxic coast; and beached clams for miles and miles. Fishermen protest on the streets because people stopped buying their allegedly contaminated fish. But this is not Neptune’s short temper: birds and mammals also perish.

My virtual self is inundated with stories of a brave new world on a daily basis. Mediated experiences that immerse me in a pool full of objects of strange change. The real merges the virtual. These are the postcards from the Anthropocene.

We humans move more than twice the earth and soil than all of the oceans, seas, rivers and lakes combined. We consume four hundred years of biomass per day in fossil fuels. We have changed our planet’s atmospheric composition, geological disposition, levels of radioactivity and acidification of land and water. Rising sea levels swallow small islands here and there. The Pacific Trash Vortex, the nuclear disaster in Fukushima, Three Gorges Dam in China and the first environmental refugees are no longer science fiction but rather dystopian realities that were caused by human-induced change.

We humans have become a dominant geologic force altering the planet in what some scientists refer to as the “Anthropocene”, a controversial and charged notion that has sparked debate across many disciplines. There are those who understand it in its strictest sense: a stratigraphic notion of geology that could eventually mark our contemporary epoch in sharp distinction from the previous Holocene. They wait anxiously to see whether the term will be formally adopted, a decision that was tentatively announced to the world in August 2016 by the International Commission on Stratigraphy (supported by the Anthropocene Working Group).

Then there are those who understand the Anthropocene in a broader scientific sense, as a necessary epistemological rupture that puts Earth system science at the heart of the discussion worth having. They claim that “landscape”, “ecosystem” and “the environment” are old words that truncate the wholeness with which we now have to address the planetary systems.

But there are also those who, refuting perhaps more dogmatic views on the Anthropocene, appreciate it as a potentially potent metaphor that can be used as a meaningful framework. Running against the sceptics who think that the Anthropocene rushes to place humans right at the epicentre of all action (anthropo- is a Greek root meaning “human”), they accept that the framework can be used to raise awareness of the consequences of our transformations. 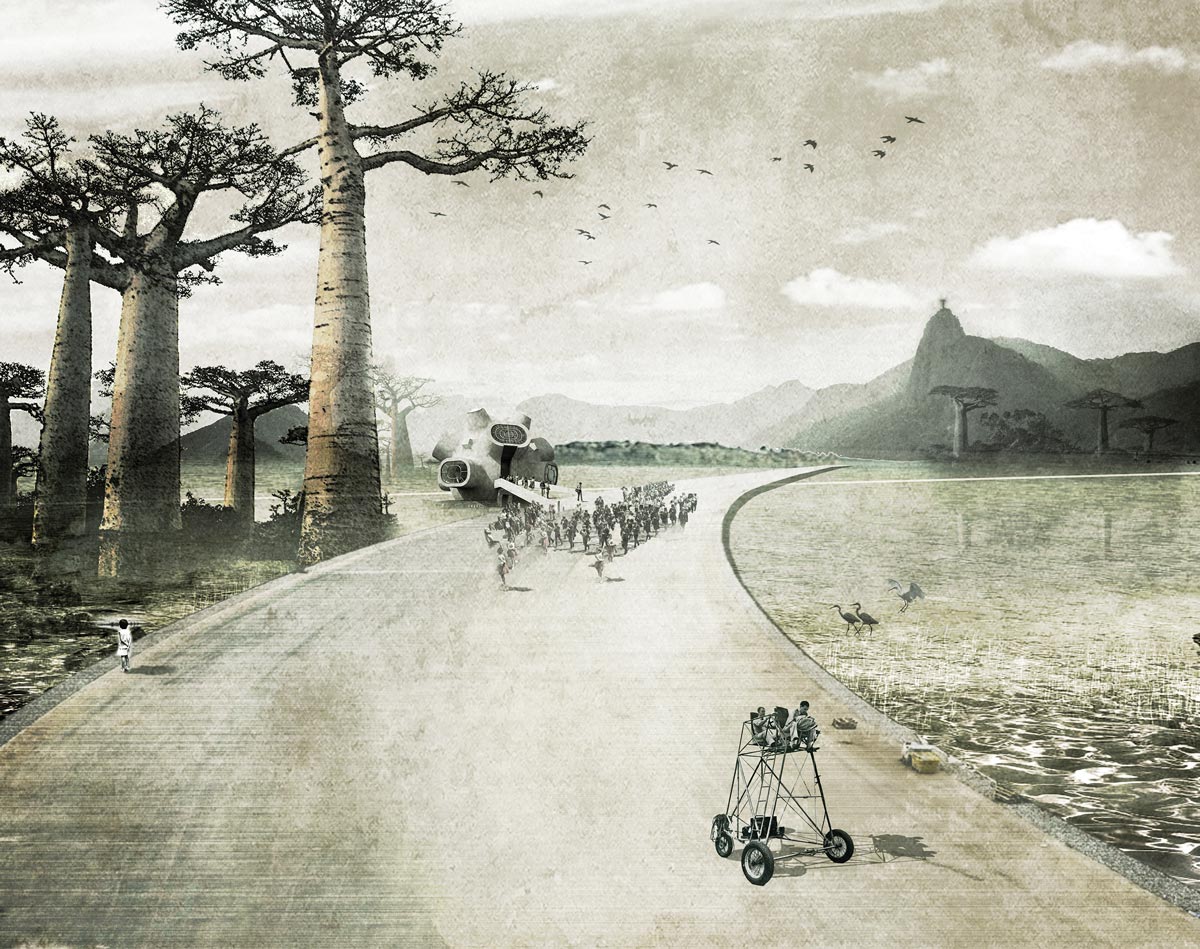 In the Great Acceleration, globalisation, mass-tourism and neo-liberalism promote exponential growth. When analysed through numbers, the Anthropocene is a series of astonishing exponential curves that have led some researchers to think that the asymptote is our new aesthetic paradigm. Science and technology push the scope of our transformations towards exponentially bigger and smaller scales. Micro and macro give way to nano and mega. Amidst the overwhelming seduction of the curve that forces us to believe it holds the key to the present, the mathematical nature of the asymptote also allows us to understand the limits beyond which we may not be able to go without completely redesigning our position on the planet or even ourselves as a species. The problem is not change itself, but the speed with which it now happens and the consciousness that the planet may not cope with it for long.

An important question emerging from this debate has to do with the necessary groundedness of a concept that not only targets the planet in its indivisible wholeness but also encourages academics, scientists and even practitioners to operate within levels of theoretical fluctuation (sometimes even aloofness) that only very rarely engage with the specifics.

A possible answer to this question lies precisely in those old words that obfuscate the Anthropocene, namely “landscape”. As a cultural construction, landscape is perfectly poised at the intersection between massively different scales of inhabitation – from local to urban, regional, national or even trans-national. Landscape dynamically contextualises whilst also being framed; it is systemic and systematic without losing contact with site and temporal specificities; it is defined as much by physical materiality as by conviction, commitment and collective will.

Look through the kaleidoscope

I envision a utopian future where Rio de Janeiro is no longer part of continental Brazil but rather a recently formed archipelago created by dramatic sea level rise. Mid-to-high class neighbourhoods submerge underwater and the favelas emerge as new historic centres, hinging between land and sea and enhancing the ecological role of the newly redefined water terrains.

“The problem is not change itself, but the speed with which it now happens and the consciousness that the planet may not cope with it for long.” 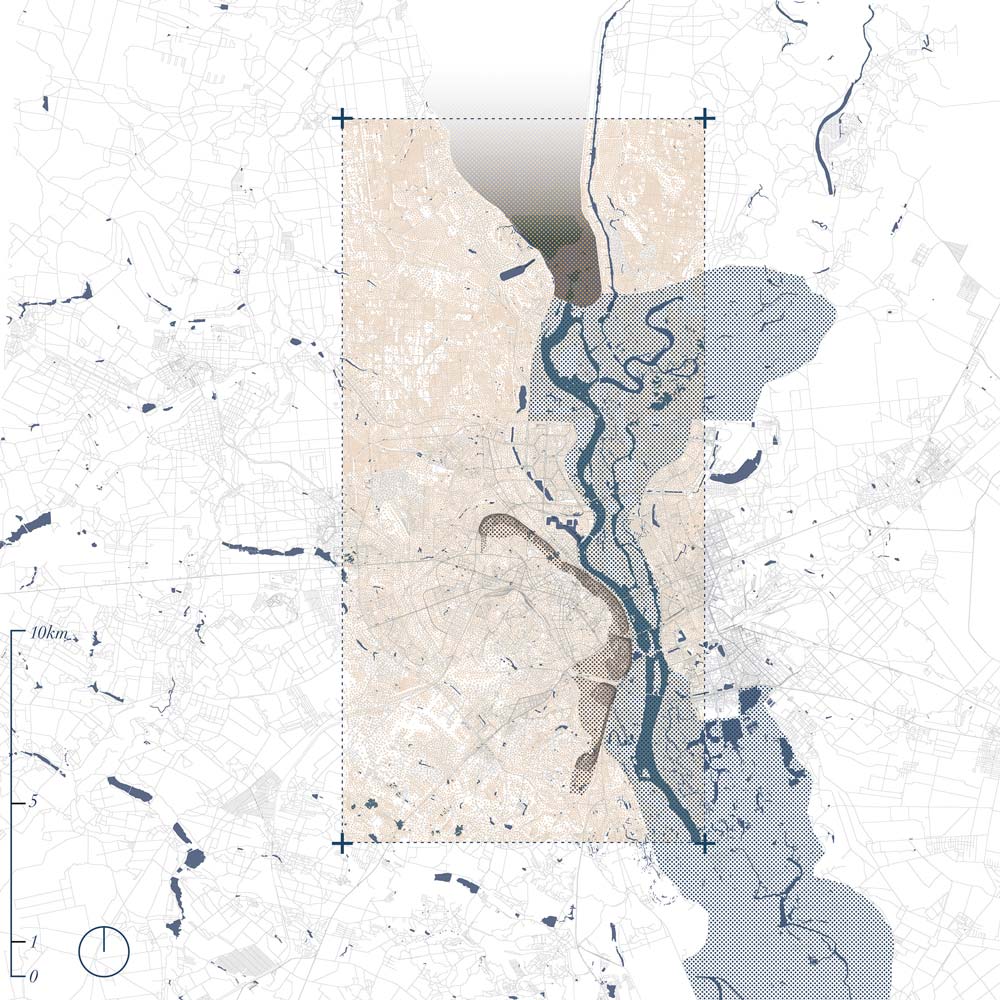 Water radioactivity from the Chernobyl nuclear meltdown of 1986, air pollution and conflicts between neighboring countries were used here to investigate the trans‑national character of the River Dnieper in the face of the Anthropocene. © Tiago Torres-Campos 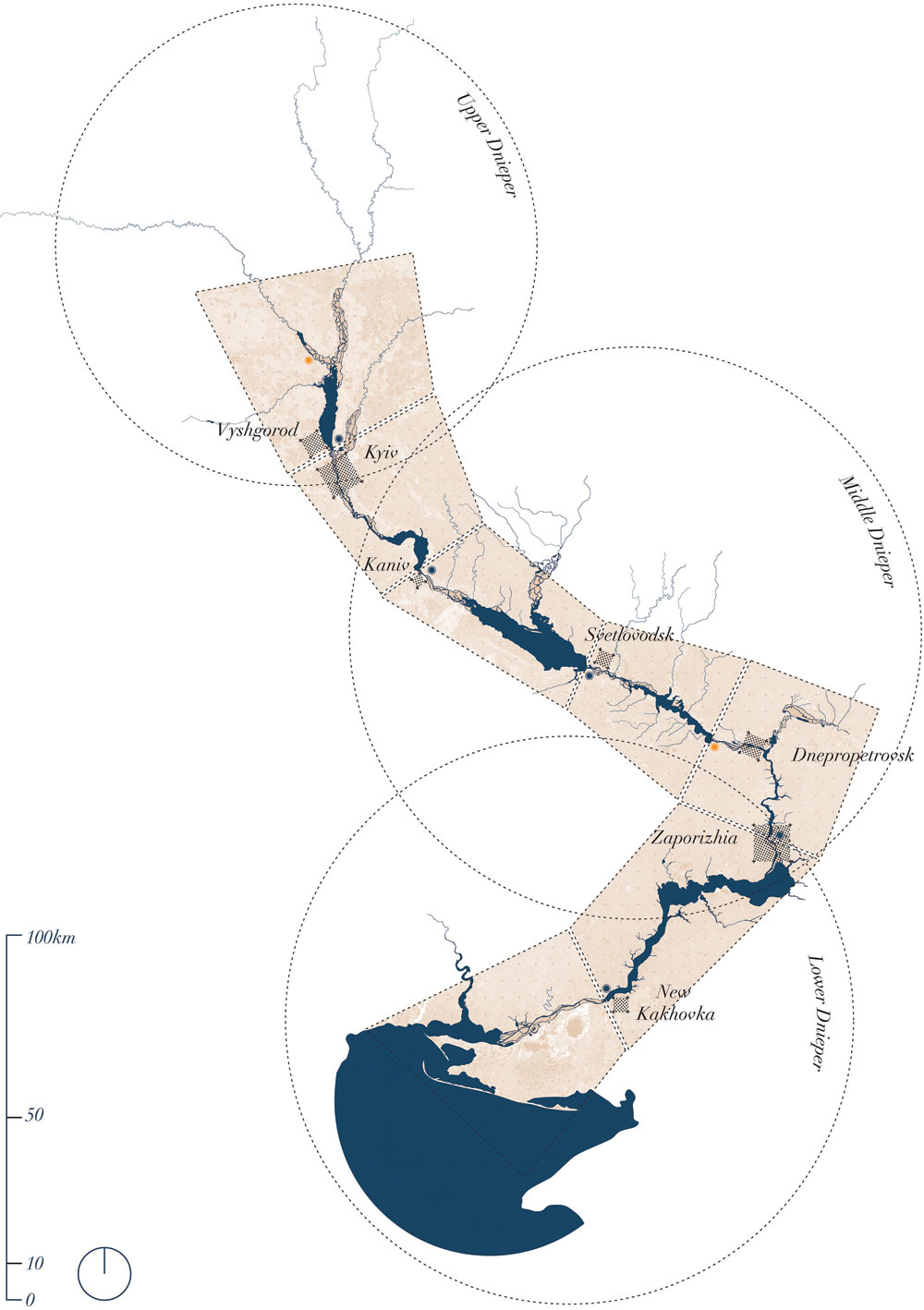 The act of foregrounding the River Dnieper in the city of Kiev encourages its inhabitants to face water contamination, flooding risks and geological hazards caused by landslides. Less a risk assessment map and more of a speculative excercise, this drawing foregrounds alternative representations and perceptions of Kiev. © Tiago Torres-Campos

I rethink the role of trans-national rivers, such as the Mekong and the Dnieper, whose basins are tightly controlled by authoritative political regimes with powerful dams. Those who control access to water command millions of people in urban and rural areas, energy, industry, agriculture, forestry and ecology. The water, stored in massive concrete boxes, is a tool to negotiate, a weapon to bully. The meandering rivers that once crossed the territory, alien to borders and politics, are pushed into the oblivion of a background from the past. 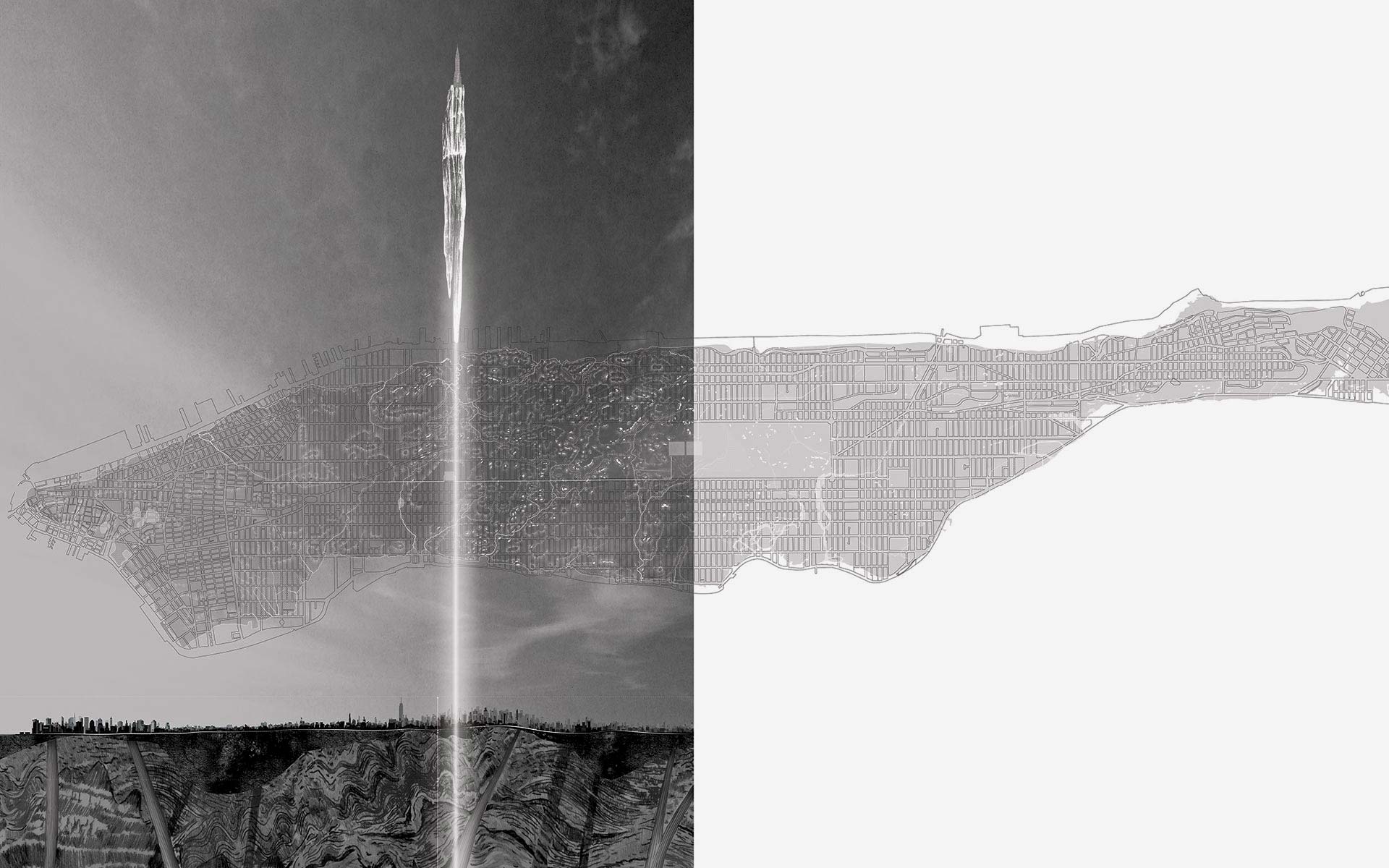 Imagine a deep section cutting across Manhattan from the tip of the tallest skyscraper down to the deep underground foundations. Without offering an accurate delineation of the bedrock, the section encourages us to look into an unfathomable abyss, wishing to see what we cannot see. © Tiago Torres- Campos

I propose a recalibration of New York using the old and folded bedrock that supports its foundations. In the incommensurable scales of deep time the iconic island of Manhattan becomes yet another moving tectonic plate, a raft adrift in an underground sea of semi-liquid rock. Using a deep section as a magnifying lens, city, bedrock and the whole planet intersect and fuse with one another.

What, then, are our contemporary landscapes? Where do they exist and how are they constituted in the Anthropocene? How do they operate amongst melting ice, ozone holes, soil depletion, water contamination and deforestation? What life do they affect and are affected by? And what do we think of them?

When facing the nerve-wrecking questions about the future of landscape architecture, side by side with these brave new scales, we cannot fall into the trap of assuming that the notion of landscape is outdated. Far from it; landscape gains new delineations as a facilitator in worlds where human and non-human actants gain vital material contours of vibrant matter. 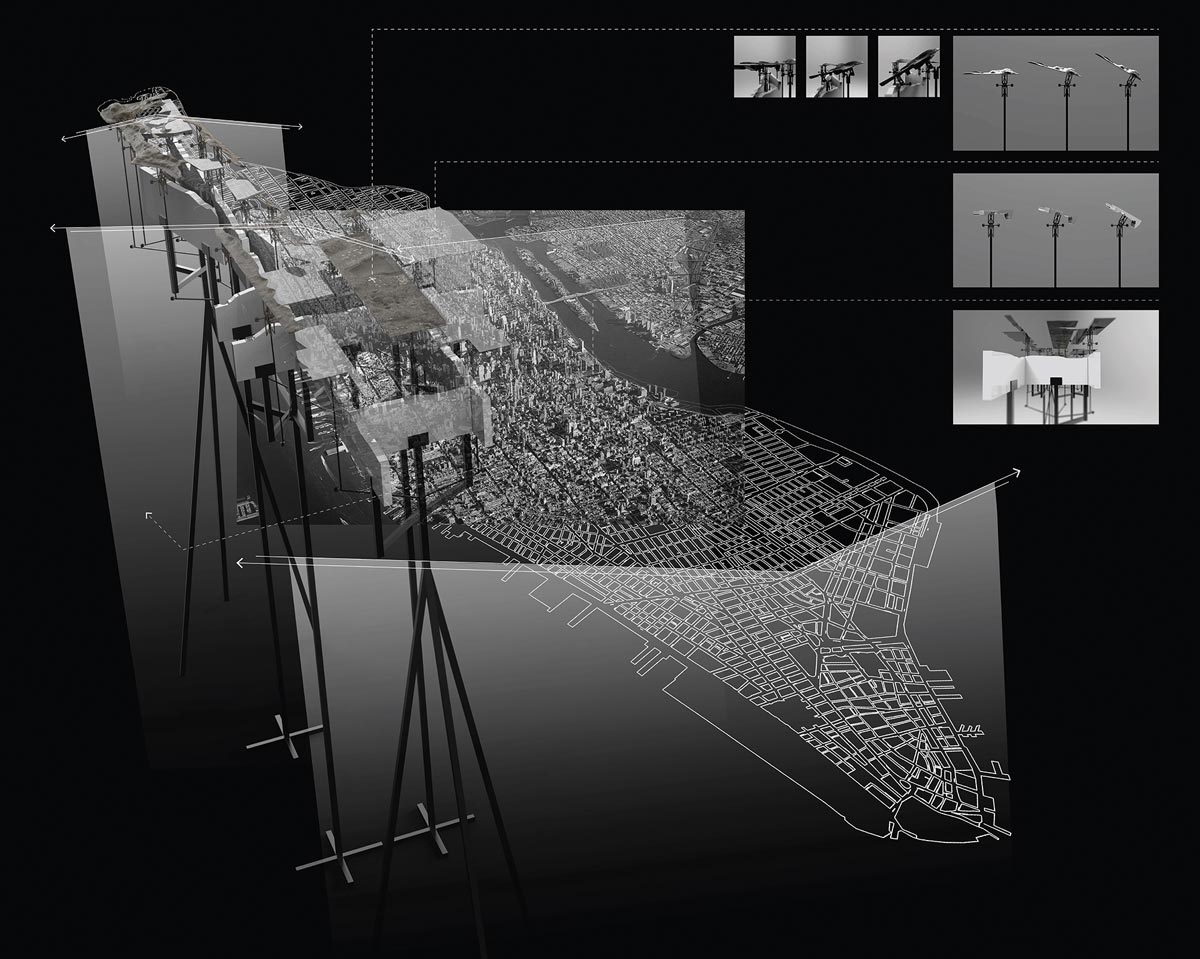 The device of the deep section is an architectural artefact in its own right that allows us to question prevailing representations of Manhattan. The device’s investigative nature encourages syntheses of imperceptible spatial changes with incommensurable temporal changes. © Tiago Torres‑Campos

As a dynamic and choreographed construction of systems in the territory, a newly revitalised notion of landscape is also one that can work as a mediator of assemblages made not only of socio-cultural identity, political will, biodiversity, ecology and productivity, but also of climate change, sea level rise, physical and virtual networks, mass-tourism pressure or energy demands. Its comprehension conceals temporal and spatial implications of a continuous work-in-progress grounded on delicate on-site balances of built and unbuilt, growth and decay, efficiency and fallow.

We encounter the wholeness of hyper-localised and massively distributed objects of strange change existing around and within us, not through a one-to-one appointment with the entire planet (like some Apollo 17 crew member in wonder at The Blue Marble) but with a series of smaller, dispersed yet interconnected, phase-spaced meetings with our landscapes of the everyday – like a child gathering flowers.

Today, philosophers, artists and designers also use these ideas to understand the cultural and aesthetic shifts we are provoking. The landscapes of the Anthropocene are kaleidoscopes that maximise affection: everything is connected to everything else; rhizomes with no beginning and no end. They are exciting because they allow us all to think experimentally about things like scale, space or time. When combined together they can open our eyes to immersive fields where we test innovative approaches, tools, and scales in the attempt to reveal ways through which we may rethink our values, our identity and even our means to coexist sustainably on this planet. ■