Adapting Tradition for the Future

Fostering sustainability and a local sense of ownership

One of our main aims is to involve members of migrant communities living close by in the construction process, thereby fostering a local sense of ownership.

Jan Glasmeier moved to Thailand in 2012 where he founded a.gor.a architects with Albert Company Olmo. He is currently working at Mae Tao clinic and volunteering for several community-based organisations. He was a lead architect for Arup Singapore during the construction of the Singapore Sports Hub and worked for Foster + Partners in London on the Masdar City masterplan in Abu Dhabi, UAE. Glasmeier graduated in 2006 with a Diploma (Dipl. Ing.) in Architecture from the Technical University of Darmstadt in Germany.

Jan Glasmeier of a.gor.a architects describes how the educational projects they help build, working with marginalised groups, community-based organisations and NGOs along the Thai-Burma border and in Chiang Mai, take advantage of established patterns of building whilst incorporating innovations that come from their own training and background in Europe. 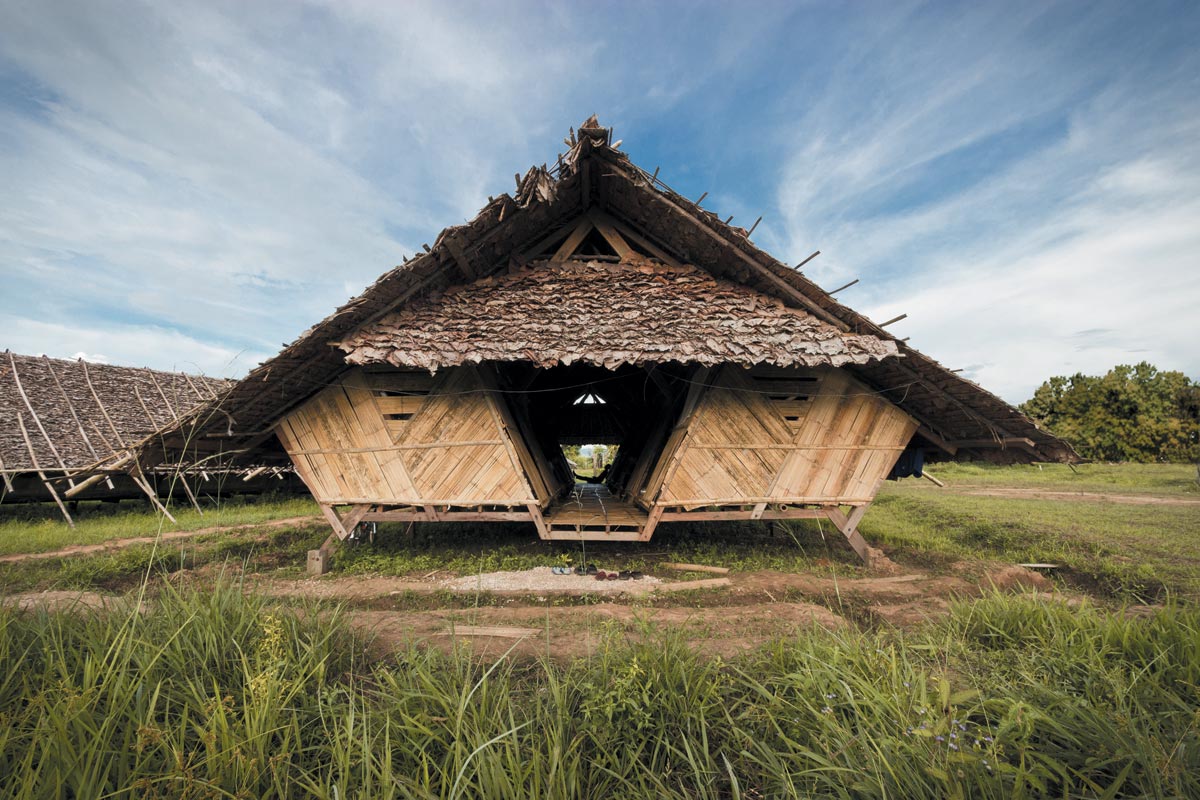 With an armed conflict having persisted for decades in the Karen State of Myanmar – between the Burmese government and the minority Karen ethnic group who want more autonomy – a daily flow of refugees and immigrants to neighbouring Thailand has resulted.  In the Thai town of Mae Sot, a few kilometres from the Burmese border, numerous schools and orphanages offer accommodation and education for the refugees and immigrants. One of these, under the tutelage of the Mae Tao Clinic organisation, which provides free healthcare for Burmese refugees and migrants, is the Children’s Development Centre school (CDC) which hosts more than 800 students.

The clinic commissioned us to design and construct a new training centre for the school. This is planned as a campus of several buildings – including a classroom and temporary dormitories – that will be grouped together on a piece of land not far from the old Mae Tao Clinic site.

The lack of space, and in many cases, the need for immediate accommodation for new students, meant that the school required a new model for a temporary low-cost dormitory that would be easy to assemble and could be built using recycled materials wherever possible.

The dormitory structure that we designed has a capacity for 25 residents, its interior layout providing an open and airy space, while still offering semi-privacy and storage space for the every student. The building materials used are locally available and familiar to their users, thus allowing for easy maintenance and low maintenance costs and also mean that the building fits well into its local environment. Funded by the Embassy of Luxembourg in Bangkok, the first of four planned dormitories was built in April 2012 within a space of four weeks.

The main cost of the building is the structure, made from recycled timber, which represents 70 per cent of the total construction cost – and which can be re-sold in the future for 80 per cent of the price. Bamboo and thatch are used for walls, floors, and roofs. Although these materials are not designed to last for more than two years without any pre-treatment, they are easily available every season – and thus the cost is an affordable and relatively stable one for the local community.

The recycled timber used for the dormitories comes from old buildings in town, from which it is carefully stripped out and put to one side by the demolition crews. The timber is polished, de-nailed and sawn down to the correct size. The frame structure is designed to be easy to disassemble and reassemble later at a new location.

The quality of available timber, mainly teak, along the Thai-Burma border is said to be amongst the best in the world.  However, the price of timber has risen by over 300 per cent over the last few years due to deforestation and illegal trafficking along the border. Thus recycling timber has become popular among the local people in order to reduce the cost of a new building. Using timber as a main building material enables us as architects to help preserve the traditional construction skills of local people already familiar with the material.

Funded by APHEDA – Union Aid Abroad from Australia – the construction of the two classrooms and a library building of 200 square metres started in September 2011 and was completed by July 2012. For this project we co-operated very closely with Gyaw Gyaw, an organisation founded by Norwegian landscape architect Line Ramstad, which works to build social buildings for and with the minority Karen ethnic group.

The buildings were placed to minimise any negative environmental impact and reduce their energy consumption. The orientation of the buildings and the location of windows within them follows the main wind direction, allowing air to flow through the houses and cool down the inside of the buildings, without the additional use of air-conditioning or fans.

“The building materials used are locally available and familiar to their users, thus allowing for easy maintenance and low maintenance costs.” 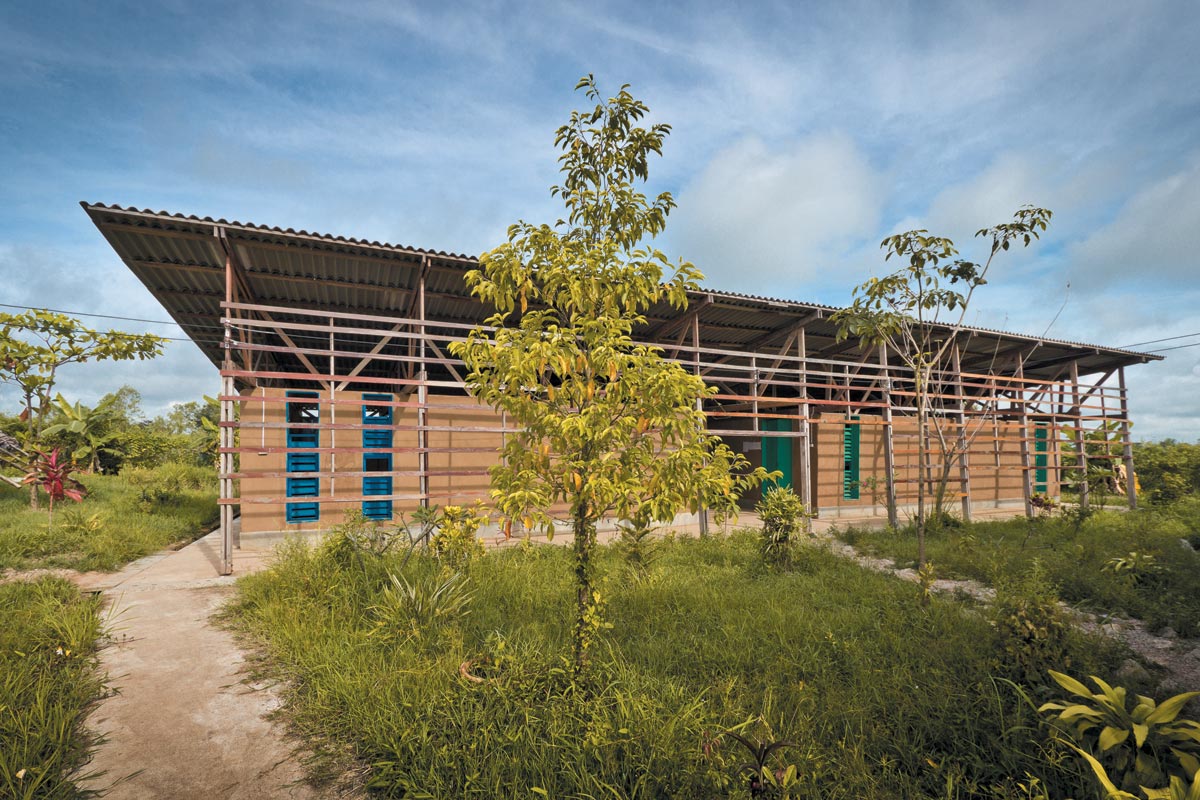 For the construction of the buildings, adobe bricks and second hand timber was chosen to ensure that the majority of the materials employed were either reused, recycled or could in time be returned to the ground without any further damage to the environment.

Adobe, as a natural and environmentally friendly material, was used for both the classroom and office walls.  To protect these walls from the impact of standing water, a 30cm raised concrete slab, had to be built first as a base. The roof is of timber construction with composite roof tiles. The windows and doors, also made out of recycled timber, were later painted green and blue for the classroom and ochre for the office building. Again the materials used were all available locally and well known to their users, allowing for ease of maintenance and resulting in low costs. Adobe bricks have been used in Thailand for many years. The value of using them to construct walls is not only based on environmental and economic reasons: mud is also an easy material to work with and allows everybody in the community to participate in the construction process. Due to its composition and thickness, earthen walls are durable yet biodegradable. They provide sufficient thermal mass to the buildings to ensure excellent thermal performance and other beneficial attributes such as sound and fireproofing. 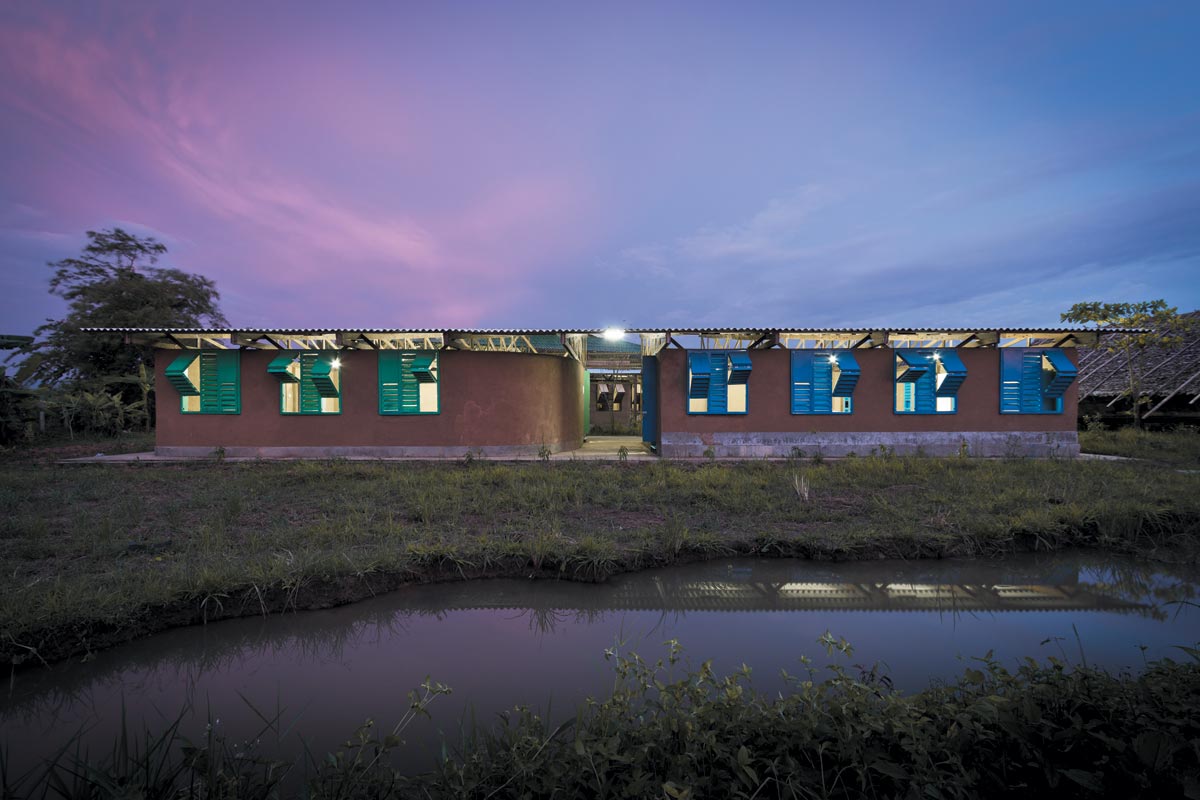 In late 2012, we were contacted by the headmaster of the Karen Migrant Learning Centre in Mae Sot. This schooling project is supporting and educating around 450 migrant children from the Karen community of Mae Sot. The school had to move from its then current site as the landowner decided not to extend its lease after May 2014. To ensure that the school would be able to continue its education programme, a new site had to be found and a new school built within two years.

Casira, an organisation from Quebec, Canada, was able to raise funds for this project over a two-year period. Casira also travelled to Thailand in 2012 and 2013, participating in two workshops, each lasting four weeks. In June 2014, the Kwel Kah Baung School’s new campus opened and the students moved into their new classrooms. 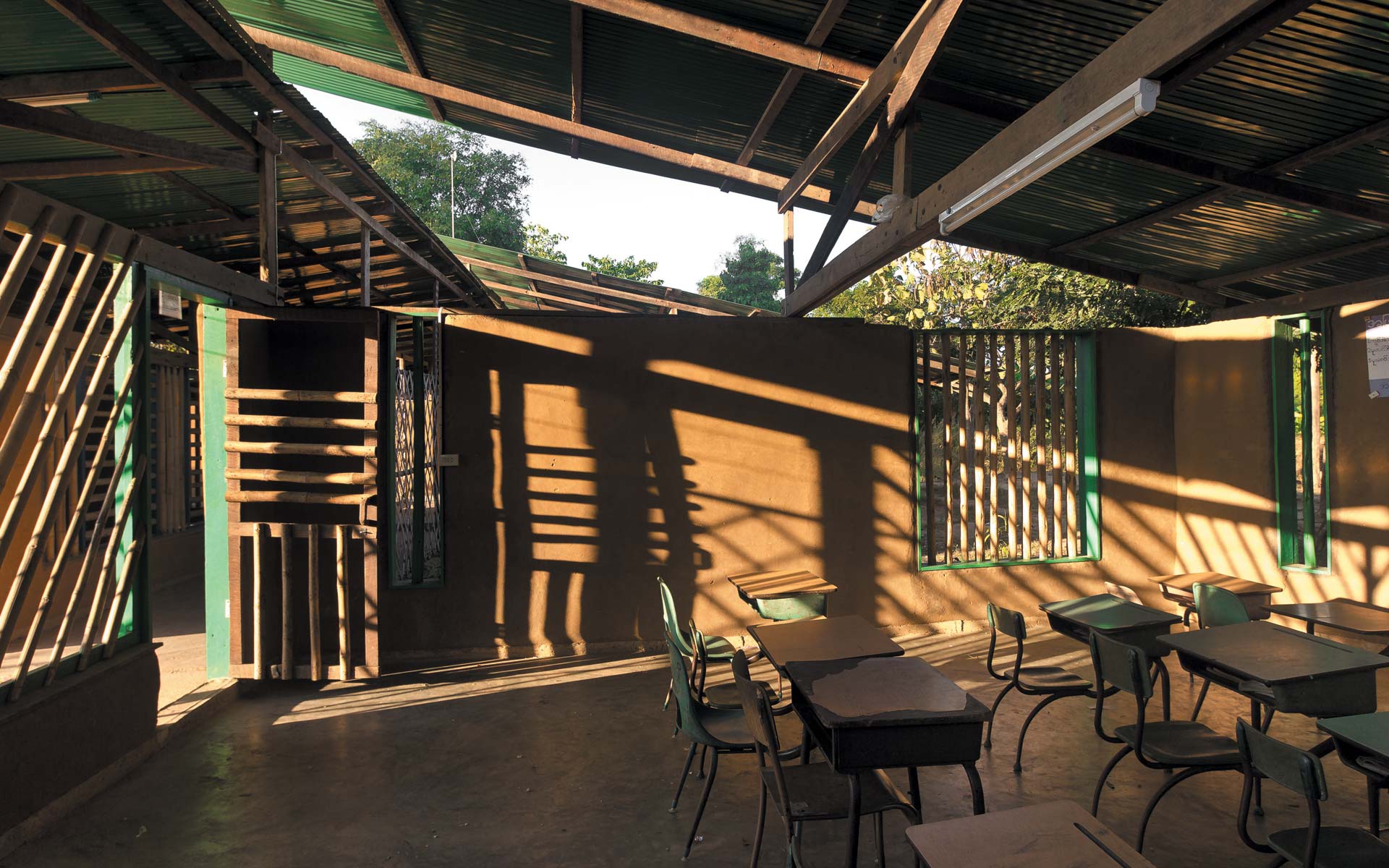 One of our main aims in all the projects is to involve members of migrant communities living close by in the construction process, thereby fostering a local sense of ownership of the project and ensuring that future maintenance can be done without external support. For the building material, adobe was chosen for this project, which perfectly matches the challenges of a tropical climate: ensuring the interior is kept cool through the day and requiring minimum maintenance after the rainy season. 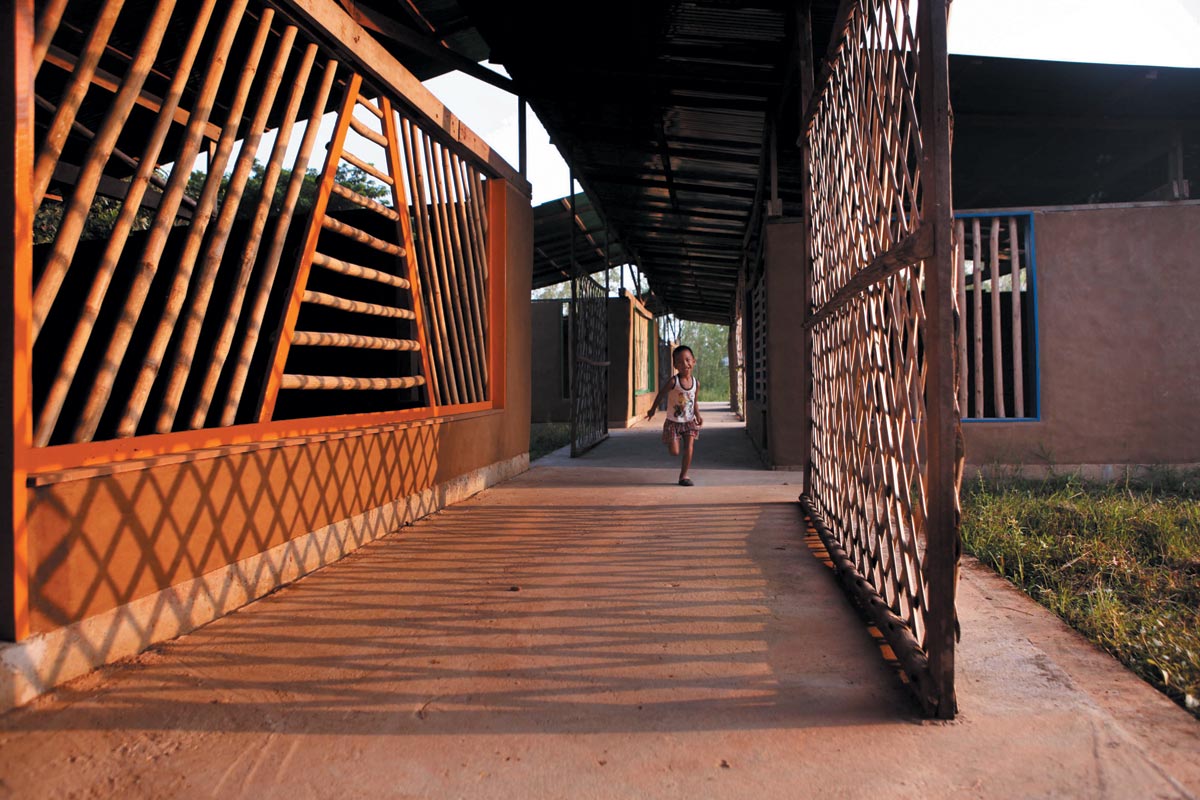 a.gor.a architects aims is to learn from traditional Thai architecture, so that it can offer an attractive alternative to more common (un)architectural solutions. Given the steady pace of development and the increasing spread and use of cheap industrialised materials and techniques – such as concrete, often ill-advisedly deployed – what a.gor.a pursues is a vernacular hybrid. The architects take advantage of established patterns of building and tried-and-tested construction techniques, then enriches them with ideas and innovations coming from their training and background in Europe, which are then developed and tested on site. Such a blend tends to be a more climate-responsive, ecological and economical one than the architecture that too often nowadays is fueling urban development in Thailand. a.gor.a’s mission is to widen the range of possible solutions and to communicate this potential to the community they work with/in. This approach implies the use of strictly local materials and the training of selected workers to be actively involved in the design process.

Although there has been a recent increase in architects working in areas affected by natural disaster and war, our approach is very different. We are not architects working in an emergency situation. Some of the migrant communities in Thailand have existed for decades and we believe that it’s important to have a sensitive, considered approach to local and cultural conditions and variations. It is not about helping people in need. It is about sharing experience and learning from each other. And through this confluence of local and “western” knowledge, as well as through the use of local materials, you can create a completely new form of architecture as can be seen in the work that we are doing. ■

“What a.gor.a pursues is a vernacular hybrid.”