Form is not a given architectural parameter of style anymore, but a consequence of our actions.

Guerilla Architects are an international collective of architects focusing on the forgotten and unused resources of our cities. Sharing a common squatting experience in London in 2012, the name “Guerilla Architects” evolved through the need to defend ourselves in court. We are a loose collective of thinkers, makers, theorists, planners, pedants and muddlers, who range in-between the fields of urban planning, built and temporary architectures, art production, cultural history, theatre and art. We come from different parts of Germany, Italy and Bulgaria and are based in Berlin, Göttingen, Sofia, as well as soon in London.

With their transgressive yet playful approach, the Guerilla Architects collective seeks to facilitate new interactions in public space with creative interventions: from window cleaning to a co-working space in a caravan.

Guerilla Architects’ philosophy is to seek out and uncover the potential that is hidden and ignored within our society and built environments. We are looking for the in-between spaces and the grey areas: legal, political, social or spatial. We founded our collective in London and Berlin in 2012 in order to work autonomously and subversively without restrictive requirements. To be able to preserve the architectural quality of our projects, to choose the right spaces and declare their potential, we must utilise new methods of working. As an international collective working on the forgotten and unused resources of our cities, we remain diverse in our daily work and widely spread in our cultural habitats. Guerilla Architects combine the professional backgrounds of architecture, urban planning, research, art history, art production, interior design, scenography and theatre, located across Germany, Bulgaria and Italy.

Our working method is fundamentally a process of brainstorming once a week in regular Skype meetings between our various home cities across Europe. This is a condensed form of exchange enabling the allocation of tasks, on the basis of everyone’s preferences, for project-related fieldwork. Therefore a project is always a process of collective decisions. That’s why we also consider involving impulses from “outside”, especially from local residents at a particular site or potential end-users of an intervention.

We think of our projects not just as outcomes of our designs, but as frameworks for a process in which we can find a better result in the end. The “end” should not be determined by a deadline, but in how far we can imagine and foster change through our intervention.

We therefore envisage and plan a project backwards from the supposed “end” to the beginning. What do we want to have achieved when we are finished? What did we change? What kind of images (as formal and aesthetic documentation of our work, but also in the minds of citizens/ residents/ end-users) do we want to have produced?

Architecture should not be determined by abstract concepts; it should be determined by precisely the thing that it is designed for. Form is not a given architectural parameter of style anymore, but a consequence of our actions.

“Public space” is supposed to be “social space” in cities, for its citizens. But it is also related to the space of the state or government that owns it. The participation of the public of course plays a key role in activating public spaces, however, it also can help ordinary people to realise their power to mould their environments around their own needs, whether their neighbourhood, city or country.

To investigate the possibilities of a social space within its legal and political framework, it is necessary not just to think about public plazas or transportation systems, which should be open to all. Unused wastelands, vacant structures, modern ruins or even rivers and lakes have the potential to be transformed into something fundamentally public. Further, now that the virtual world has become a real public space for interaction and exchange and where the foundation of free action is information, the general idea of public space should not just be limited by spatial borders, but should also be considered as a state of mind that reaches into the political sphere and holds within it the possibility to act freely.

“A project is always a process of collective decisions.” 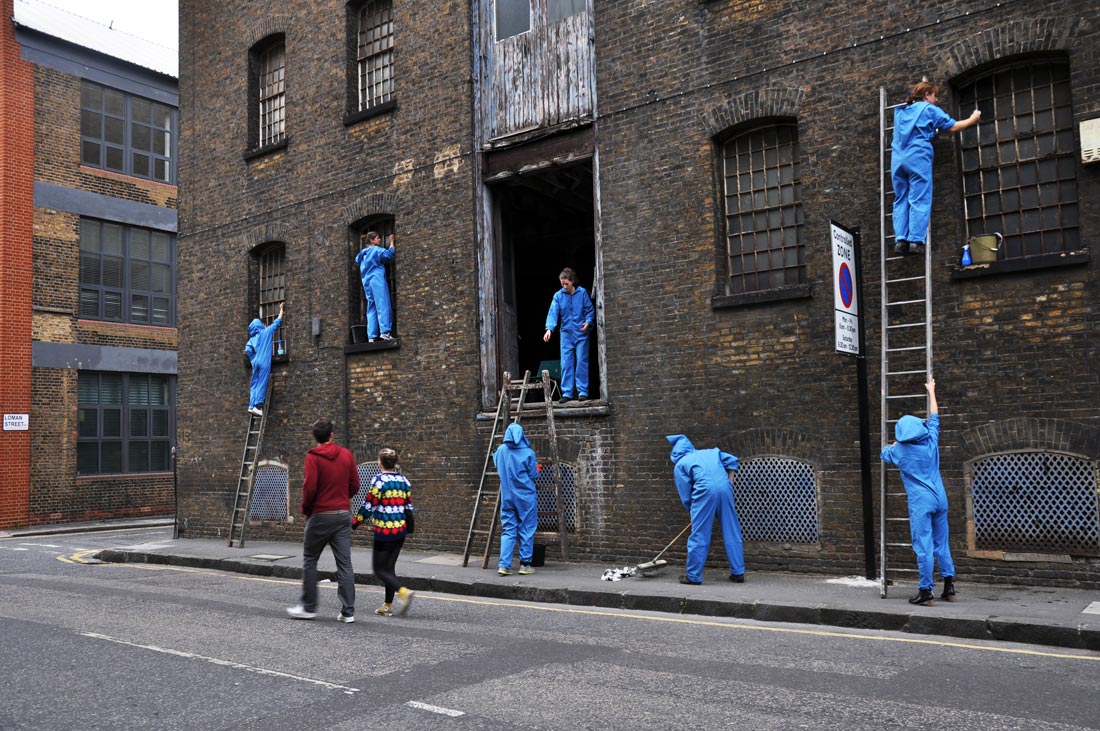 Hidden Borough, one of our projects at a squat in Great Suffolk Street, London, gave a Victorian warehouse back to the city and its citizens by simply cleaning its windows. Our temporary home became open to the public and symbolised our goal: that urban space belongs to everyone and can be redefined. Disconnecting the city from the logic of money, standardisation and regulation, we then staged a utopia of freely available resources such as shelter, water, food, electricity. Whilst small urban interventions alone have a nominal and very local impact, amidst a much wider network of interventions interconnected to form a new borough, they could help provide a model for a new method of urban planning policy. This new urban district, made up of vacancies, has no fixed borders. It acts like a synaptic net: it is not closed, but open to all and expandable. 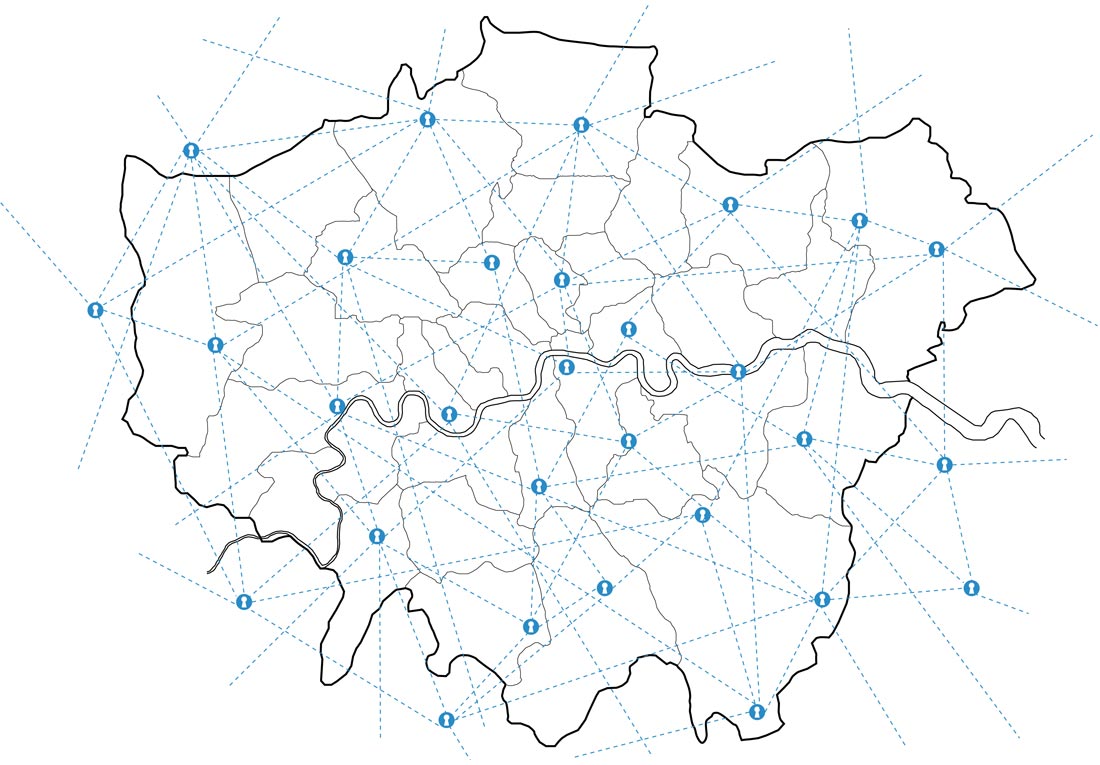 Since that common experience, we have worked on several issues around the topic of unused and forgotten resources. In particular the specific issue of food overproduction. The Diver – Restaurant Experience, for example, was a social experiment to provide strangers with an unusual dinner experience. Creating a fancy pop-up restaurant in various vacant sites, such as an ex-Soviet broadcasting centre in Berlin, we aimed to interfere with typical culinary expectations. When our guests got their bills, they realised our true intentions as all our unconventional, vegetarian, four-course menu was made and cooked from waste food.

On another occasion, a market square served as a starting point for an impromptu intervention called Gefundenes Fressen (Donation Dinner). Shortly before the end of the market, we asked the market traders to donate their leftovers for a common dinner. We cooked several meals and everybody was invited to join the dining table. Thereby a simple meal of leftover food became a sculptural installation of social interaction. We used the existing structures and network of this particular public space and gave its users, who came from various backgrounds, a new platform for communication without barriers. The empty table remained at the end as the only evidence of what had temporarily emphasised the market square’s key function – as a place of social exchange. 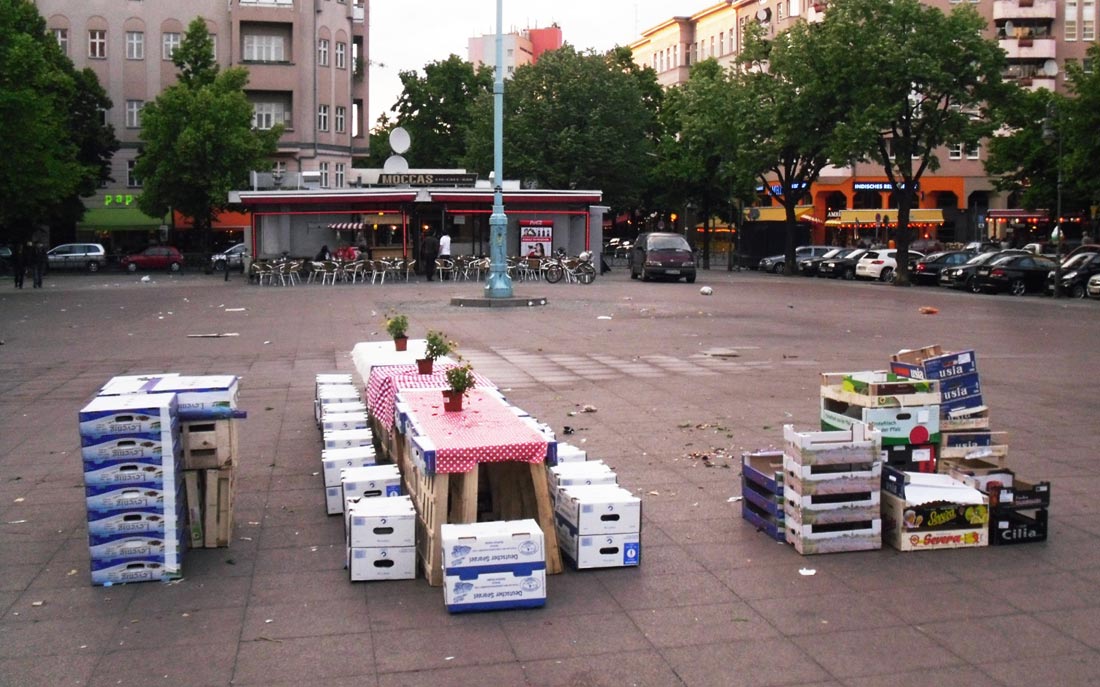 Our most recent project, Bastian, der StadtSymbiont (Bastian in the City) – a co-working space inside a caravan – is another attempt to hack the city. With rising rent prices for studio spaces, the creative industries face increasingly unstable working conditions. Despite this, or maybe just because of it, many creatives are striving harder still to achieve the dream of having an autonomous space for their own practice. By working “between the gaps” in laws and parking regulations, we developed a guide for central, long-lasting and cost-efficient working spaces. Free wifi, public toilets and canteens complete this autonomous, always on-site, long-term and cheap architecture office as well as connecting this small-scale working space to the scale of the city at large. Always in movement, the architect’s workspace and field of work merge on site. 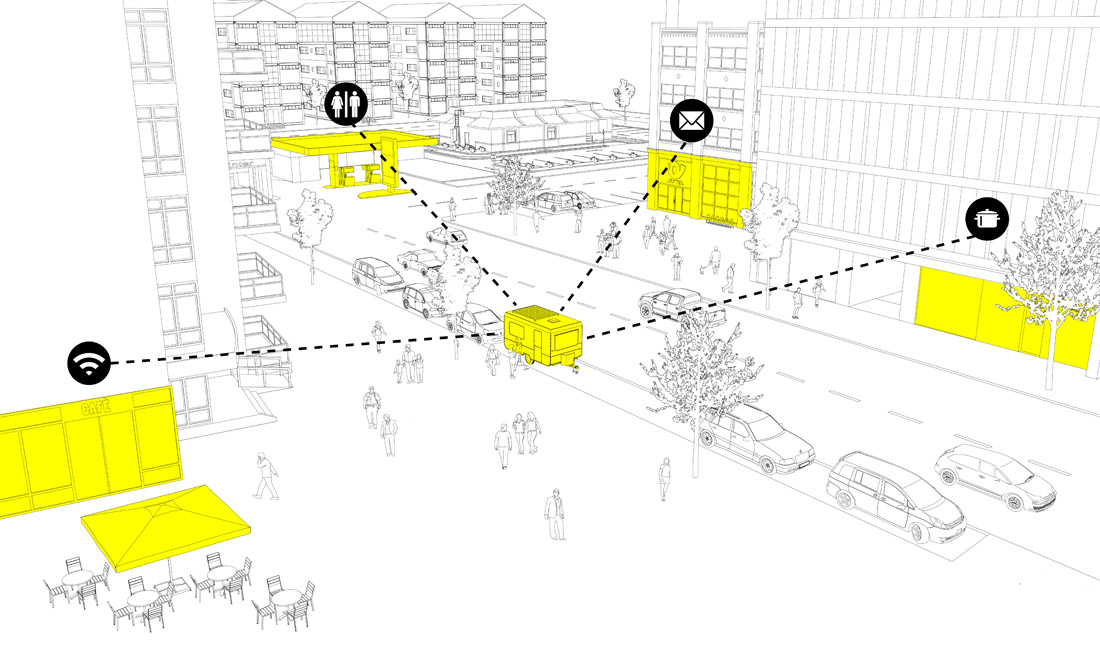 Bastian in the City: a mobile co‑working space in a caravan. © Guerilla Architects

The future of architecture does not lie in our hands, but it can be actively developed by working collectively, by being politically engaged and by being internationally connected.