Speculating on designing nature and design as nature

We find it very important that the discussion on what to do with the power of synthetic biology is in the hands of citizens and not just scientists and experts with knowledge in the field.

Linnea Våglund is a designer focusing on speculative design and science. She has a BFA in Industrial design from Konstfack, University College of Arts, Crafts and Design in Stockholm and is currently studying MA Material Futures at Central Saint Martins in London.

Leo Fidjeland is a technologist focusing on speculative design and science. He has a BSc in Engineering Physics from the Royal Institute of Technology in Stockholm and is currently studying MA Material Futures at Central Saint Martins in London.

This project has partly been conducted at the Interactive Institute Swedish ICT.

Linnea Våglund and Leo Fidjeland present a series of speculative projects designed to explore how the future of genetically designed nature and design made from artificial “natural” materials could change our relationship with the natural world.

With the emergence of synthetic biology, the foundations of life itself could be subject to major changes. This research area, that combines engineering and the natural sciences, has the goal of creating new biological functions that do not exist naturally. We can now grow meat in laboratories, modify bacteria to produce biomaterials, like spider-silk and cotton, and alter organisms to glow in different colours. We are heading towards a future where we might be able to change organisms however we want – and create new ones.

How will we use this new power? How will it affect us and our relationship with nature? In these projects, current advances are extrapolated into extreme scenarios through the use of speculative design, a type of design meant to facilitate discussion, rather than to solve problems. The scenarios are not a prediction or a forecast of the future, but an imagination of a parallel world, a possible future.

From these futures, speculative artefacts and organisms are designed, materialised and extracted to interact with the public, thereby immersing them in this alternate reality. The discussion of how we should react to this emerging technology is in the hands of the spectator.

A group of DIY bio-hackers design a new sensor plant that detects pollution levels and indicates the result through sound, in order to raise awareness of the worsening environmental situation to their fellow citizens. When the plants are put in beneficial, clean surroundings, they sing beautifully. When put in a heavily polluted place, they scream a disturbing noise. 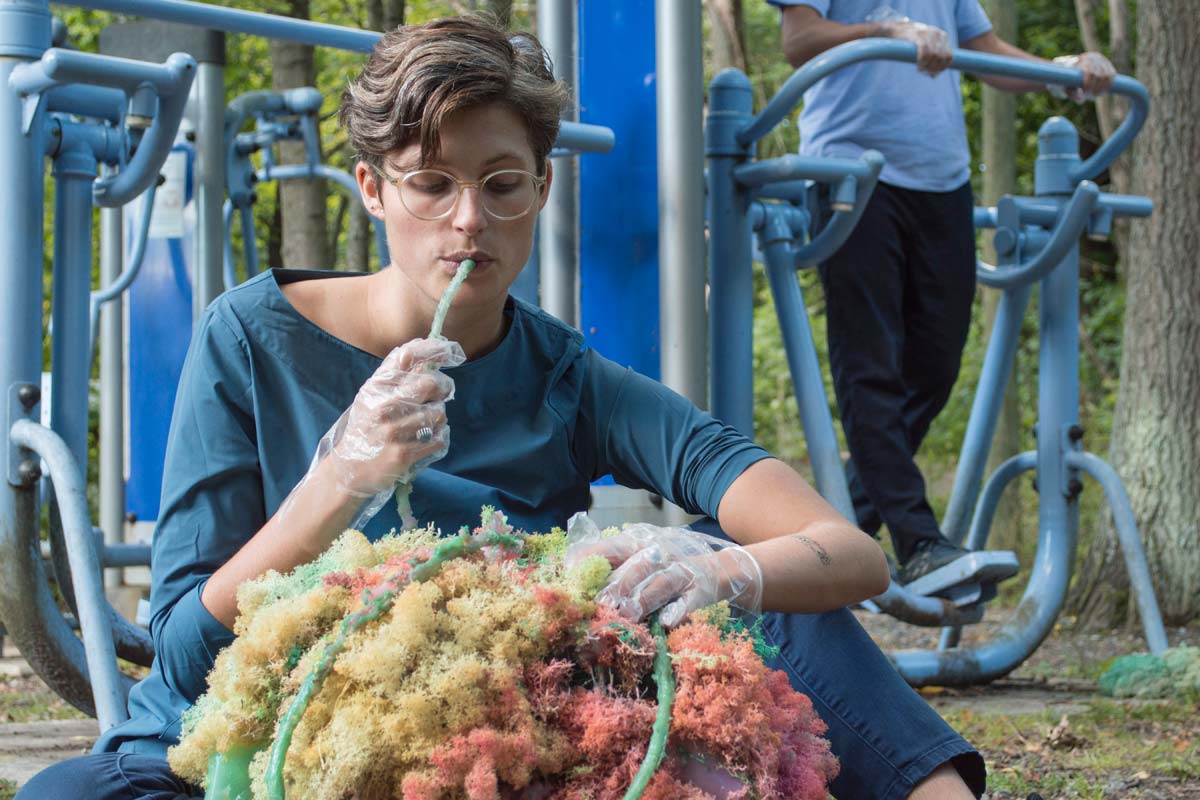 Initially, the environment is improved due to people responding to these audible, emotional cues of the plants. However, having found a new niche in which to prosper, the plants eventually mutate and spread without control, rendering polluted areas uninhabitable through noise. It’s as if nature suddenly has the power to express itself, claiming the right to exist free from pollution.

The Anthropocene, the proposed human geological epoch, heralds mass extinction and loss of biodiversity. But with synthetic biology, we could end up in a state with even more species than before. In a future where parts (or all) of nature have been designed by humans, what would biodiversity mean? Could human-designed plants even be considered natural?

Audible Flora has been designed with a good intentions: to improve the environment and reduce pollution. But with the power to quickly change organisms, there is a risk that sensitive ecosystems that have taken thousands of years to develop are disrupted. When do we classify a species as invasive – when plants created in laboratories are not native to any location? What is the moral difference between natural adaptation and human design?

Imagine a future where corporations and governments control what species that exist. Would they care about genetic pollution, when they today often don’t even care about particle pollution?

In the year 2030, on the brink of ecological collapse, when overconsumption threatens human existence, factories are hastily shut down to give some breathing room to the planet.

To reconcile our lifestyle with the ecosystem, only biological and digital goods are allowed on the market. This leads to a global surge in synthetic biology research, and soon, we can modify organisms to grow into any shape or function: matching the products of the old world. 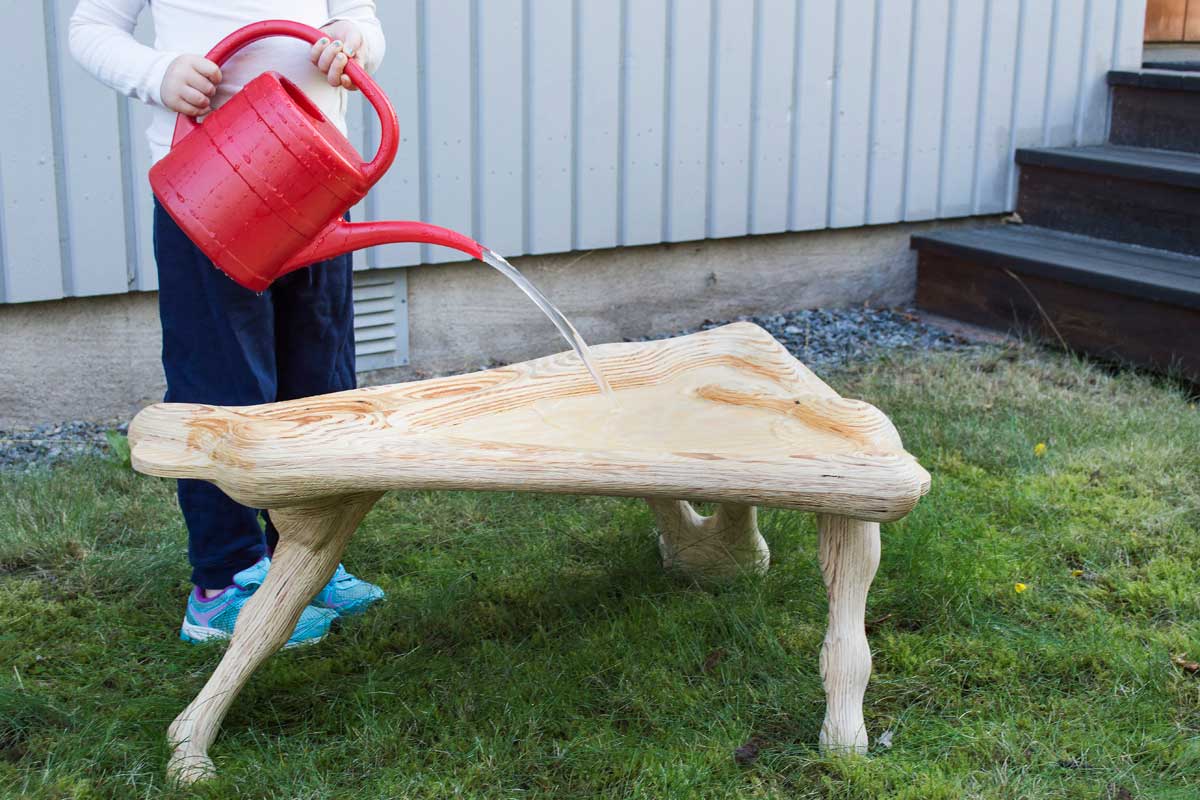 “I’m helping my neighbour to water her table while she is on vacation”. © Annie Åkerman

A table can now be grown from a genetically modified seed. It requires care and attention to live and prosper, but in return, it repairs itself and can multiply and spread. The teddy bear that your child once treated as if it was alive, now is. Growing with the child, getting bigger as the child gets older. Bioluminescent fungi replace lamps given the lack of electricity.

Back in the present, GM crops are already being patented, transforming a species into intellectual property and a commodity. In this future scenario, nature is being transformed into a possession and our possessions are a part of nature. When the border between nature and product dissolves, how will our relation to our surroundings change?

If your products were alive, would you value them differently? Would it ease some of the most unsustainable aspects of our consumer lifestyle? Or would the mindset travel in the opposite direction, with nature being regarded as something that could easily be replaced and recreated, thus losing its value. Would we develop the same estranged relationship towards nature that we have with products today?

In the face of bee extinction, an alluring plant that taps into human desires and needs has started appearing around outdoor gyms. The passing humans drink the plant nectar to replenish their strength. Some pollen sticks in their shirt, and as they drink from the next plant, the vital cross-pollination occurs. Nobody really knows if the plants appeared by a random mutation or if they were given a “helping hand” by local bio-hackers.

In a world where we see plants as products, plants might see us as consumers – just as in Human Beeings, where a plant has survived bee extinction by adapting to human health norms. In such a future, would only the plants that tended to human desires and needs thrive in this new “market”? Do we only care about something if it adds value to the human condition? Or does untouched nature have a value in its own right?

All species transform their surroundings and in that sense change ecological and environmental conditions. What makes the human transformation of the planet remarkable is the speed with which it is occurring, and the fact that it is (at least in part) driven by conscious agency.

The job of speculative design is to show that things could in fact be very different. To make people believe that change is possible and that we have a chance to alter our values, norms, societies and lives. 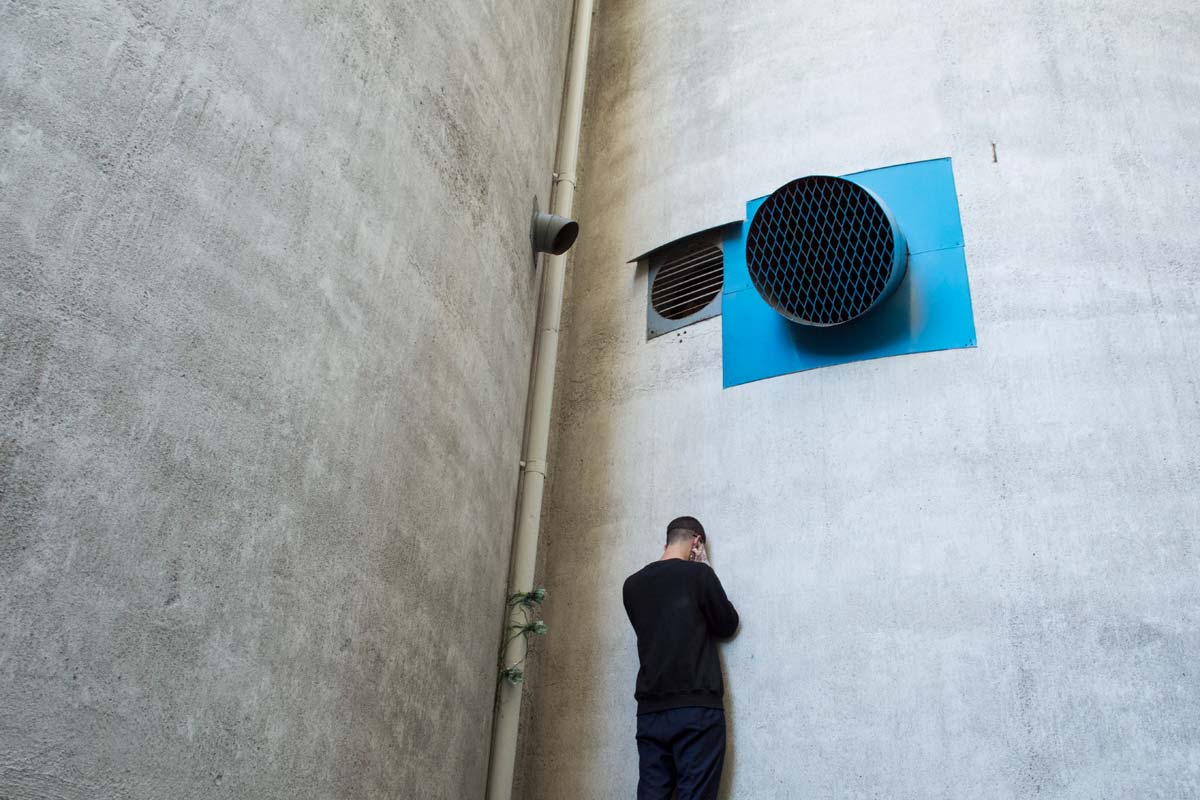 We find it very important that the discussion on what to do with the power of synthetic biology is in the hands of citizens and not just scientists and experts with knowledge in the field. As designers, we can be catalysts to such discussions by conceptualising, materialising and visualising possible futures. A materialisation believable enough to stimulate the same discussion as that if the scenarios were real. ■

Menu
We use cookies to ensure that we give you the best experience on our website. If you continue to use this site we will assume that you are happy with it.OK!Privacy policy