Architectural practice for the living present

We are now forced to see our future as something that must be carved out of the present; pragmatically, incrementally and tactically.

URBZ is an experimental research and action collective founded by Matias Echanove and Rahul Srivastava, with collaborators in Mumbai, Goa, Geneva, New York, Bogotá and São Paulo. Since 2008, URBZ has organised collaborative workshops, conducted field research, generated ideas and projects and produced web content about urban space and places. URBZ believes that residents are experts in their neighbourhoods and develops concepts, tools methodologies that allow architects, urbanists and policymakers to tap into that knowledge pool.

Echanove and Srivastava are also the co-directors of the Institute of Urbanology, which has offices in Mumbai and Goa, India. They have authored numerous essays and commentaries and their work has been exhibited from MoMA in New York to the MAXXI in Rome and the São Paulo Cultural Center.

Matias Echanove studied government and economics at the London School of Economics, urban planning at Columbia University, and urban information systems at the University of Tokyo. Rahul Srivastava studied social and urban anthropology in Mumbai, Delhi and Cambridge, UK.

Matias Echanove and Rahul Srivastava of the URBZ collective believe the architectural profession needs to stop projecting instrumental, utopian solutions for the future, and engage pragmatically with messy reality as it unfolds – they propose a new way of practice that would be far more radical and optimistic with their call for architects to get tooled-up, get back in the field and get their hands dirty. And they are leading by example.

Seen from Mumbai, an urban agglomeration of about 20 million people, which generates 20 per cent of India’s GDP, architecture seems like a nice idea that, along with countless other social ambitions, has found little resonance in the contemporary world.

Perhaps it is not that architecture doesn’t have a future, but rather that the notion of the future itself has become anachronistic. Bruno Latour says we lost the future somewhere in the twentieth century and are now only left with an avenir. 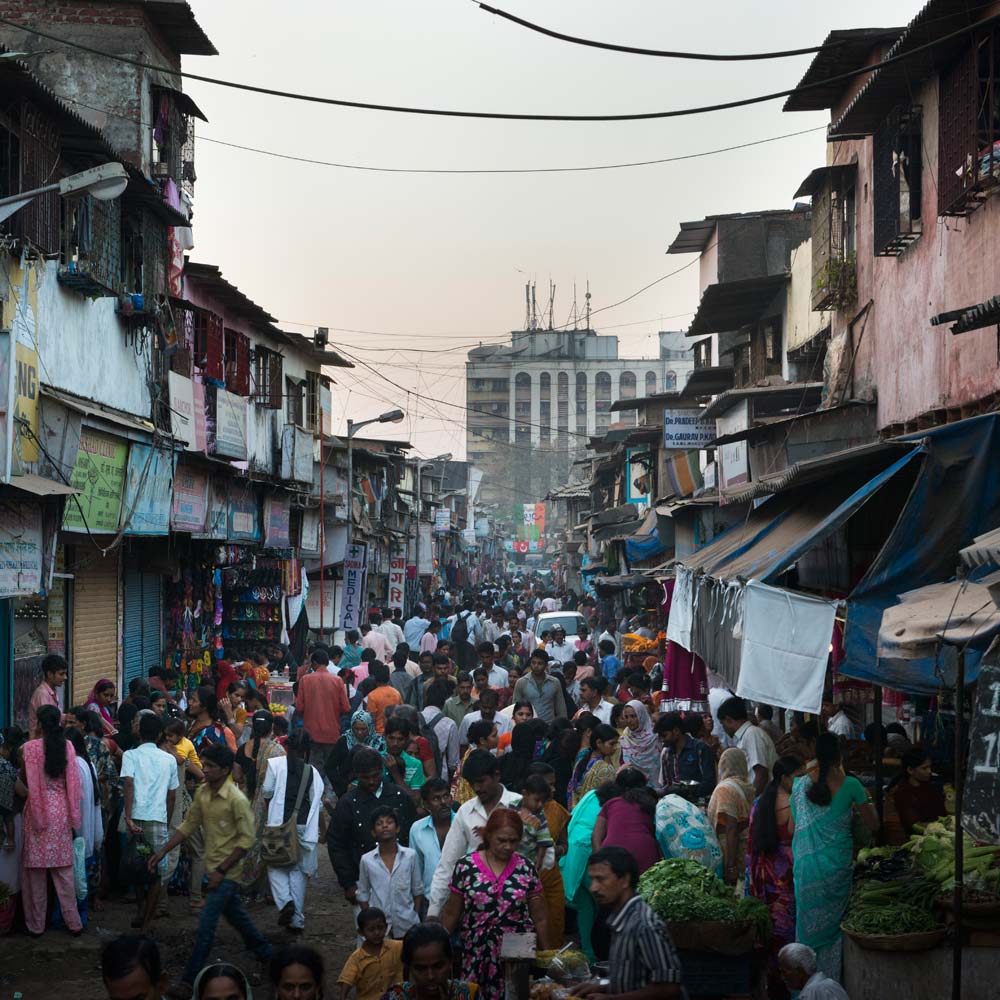 Avenir literally means “what is to come”. Unlike the future, which we once believed we could construct, l’avenir is not something we can anticipate or control. What is coming at us is the by-product of our past projections. Failed socialist and capitalist utopias of the twentieth century have left behind a toxic mix of social injustice and environmental wreckage that we must now deal with.

We have lost faith in a version of the future that would be radically better than the present. The notion of a mechanical and linear future into which we could teleport ourselves has given way to something else. We are now forced to see our future as something that must be carved out of the present; pragmatically, incrementally and tactically. This is not inexorably tragic.

Responding to our present condition and sorting out the mess requires no less creativity than drawing the future on a blank page. But it is a different kind of creativity. The incremental approach takes the present condition, however bad, as the only possible starting point. The pragmatic mindset reminds us that all we can wish for is a better version of what we have already. We can’t masterplan our way to a perfect future, but we can recognise the potential hidden in even the most difficult situations and help fulfill it. 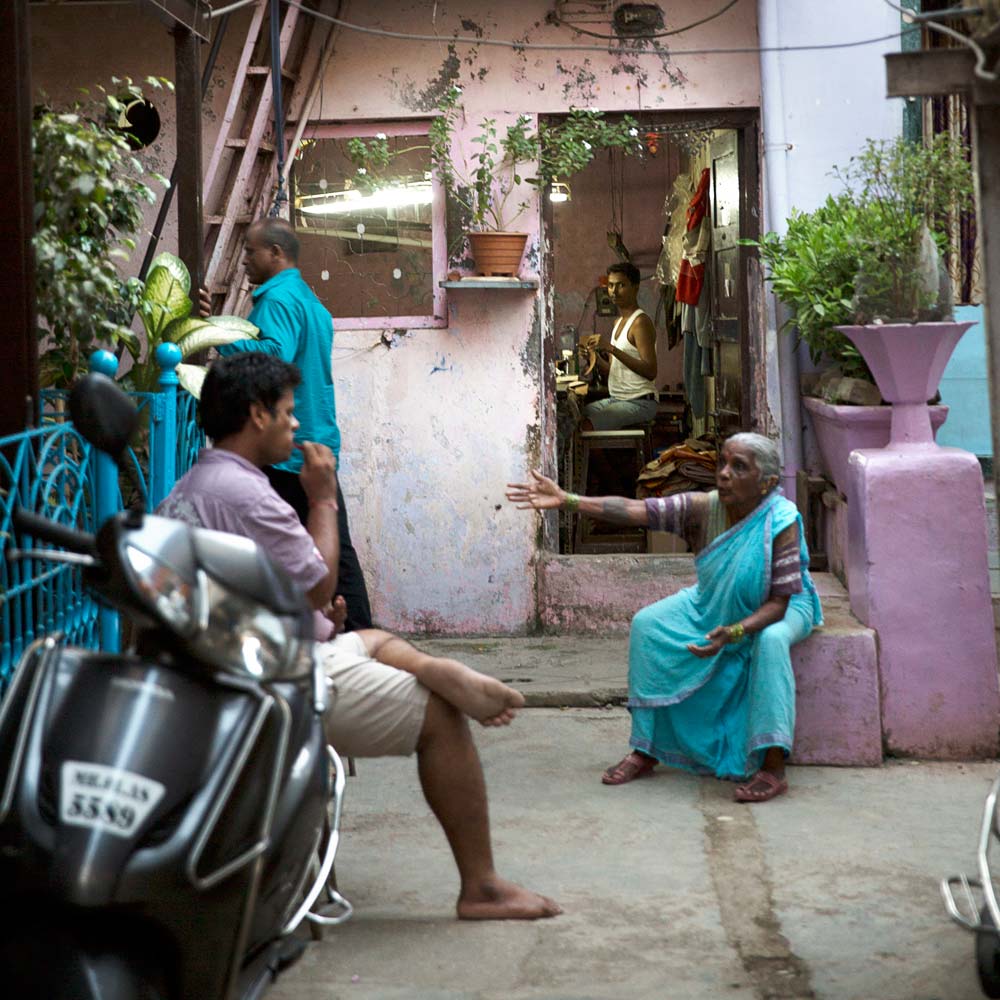 A worker overhears his neighbours chatting outside. Back alleys are full of a variety of uses. Homes themselves often double up as work spaces. Photo: Ishan Tankha, June 2014 © URBZ

In Mumbai, 60 per cent of the population are estimated to be living in slums. This means that they are left to cope on their own, with quasi-non-existent support from the state, and quasi-ubiquitous repression from mainstream institutions. At the other end of the spectrum, luxurious skyscrapers are mushrooming like there is no tomorrow, following only the irrational logic of real estate speculation. As a result, half a million flats are left vacant in Mumbai, a city where it is not uncommon for a family of eight people to live in a 20 square metre apartment.

This landscape of new tall buildings, which mirrors the dated exuberance of twentieth-century New York, Chicago or Hong Kong, seems to function better without architects. Speculative urban development doesn’t demand design skill as much as accounting and legal expertise. Many young architects enter the market full of ideas and enthusiasm, but quickly lose hopes and illusions when they realise that what is demanded of them is not actual design but rather translating Excel sheets into buildings. 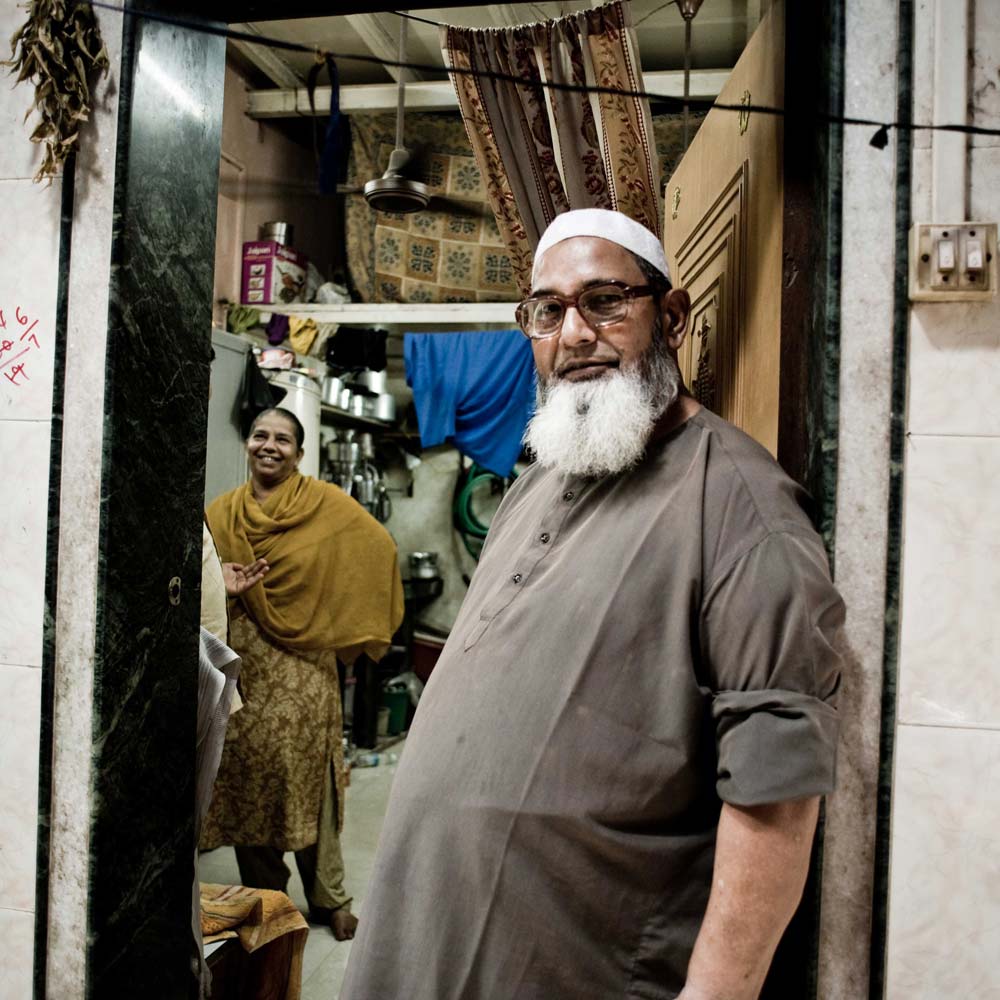 My home is not a slum: residents welcome you to their home in Dharavi – otherwise misrepresented as the largest slum in Asia. Photo: Brooks Reynolds, June 2010 © URBZ

Given the lack of importance accorded to architecture and design at the high end of the construction spectrum, one would expect that architects would be rushing to where they are most needed: to work in slums, where people struggle with fundamentals like ventilation, light and space optimisation.
But in fact, virtually no architects operate in slums in Mumbai. They are not equipped for it. When architects come to a slum, it is usually to plan what will emerge post eviction. No wonder local residents view them with suspicion.

The way we conceive architecture practice, the tools used and its very language seems totally ill-fitted to address the issues with which most people are confronted in emergent megacities.

Academic institutions in charge of training architects seem to exist in a space-time warp where the future can still be conceived as a total project – architectural, social and political. The same is true of most architectural museums and galleries. These big white boxes only seem to exist to reassure us that there are still stories worth being told; architectural fairy tales that we would love to believe. They show good work for a good world that doesn’t exist. Talented architects in Mumbai work almost exclusively on private villas located in the far off periphery, gated and out of sight – shielded from the city’s grim reality.

Nothing illustrates the disconnect between architects and the city better than the way houses are actually built in Mumbai’s densest neighbourhoods, which are bustling with construction activity. In conventional practice, an architectural drawing is indispensable to translate projects into objects. However, in an adverse context, where occupancy rights are not fully recognised, responsiveness is everything. In such a context, a plan or a drawing serves almost no purpose. Conception and construction happen simultaneously. 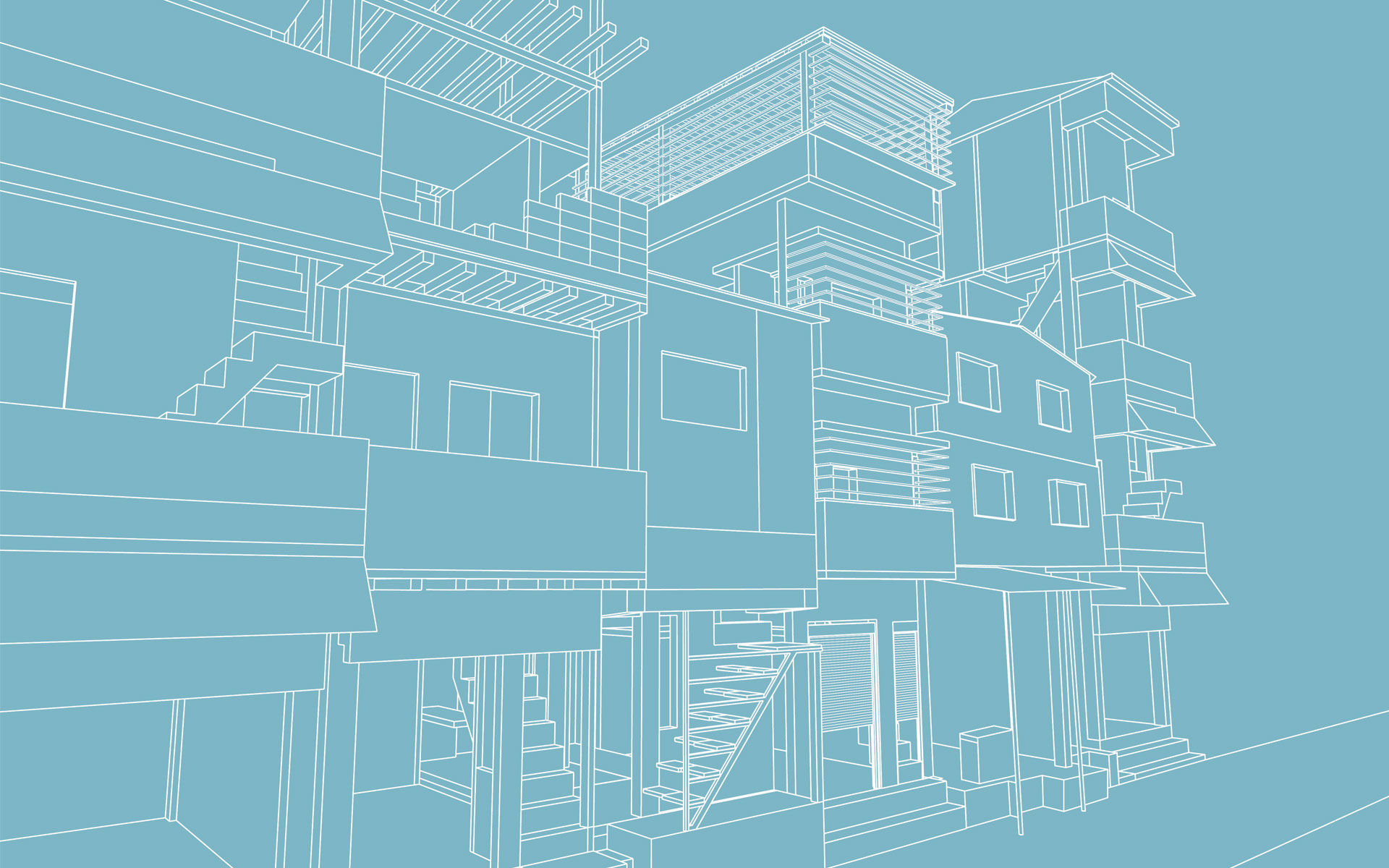 The classic architectural plan fails precisely because it is based on the naïve and dangerous belief that you can erase a little bit of the present world and replace it with a piece from the future which will fit right in. But it won’t fit in so-called slums because the rules are different. An architect walking in a Mumbai slum is like a “prawn” in the sci-fi film District 9; a lost alien, whose power is reduced to zero because nothing corresponds to what he has learned. 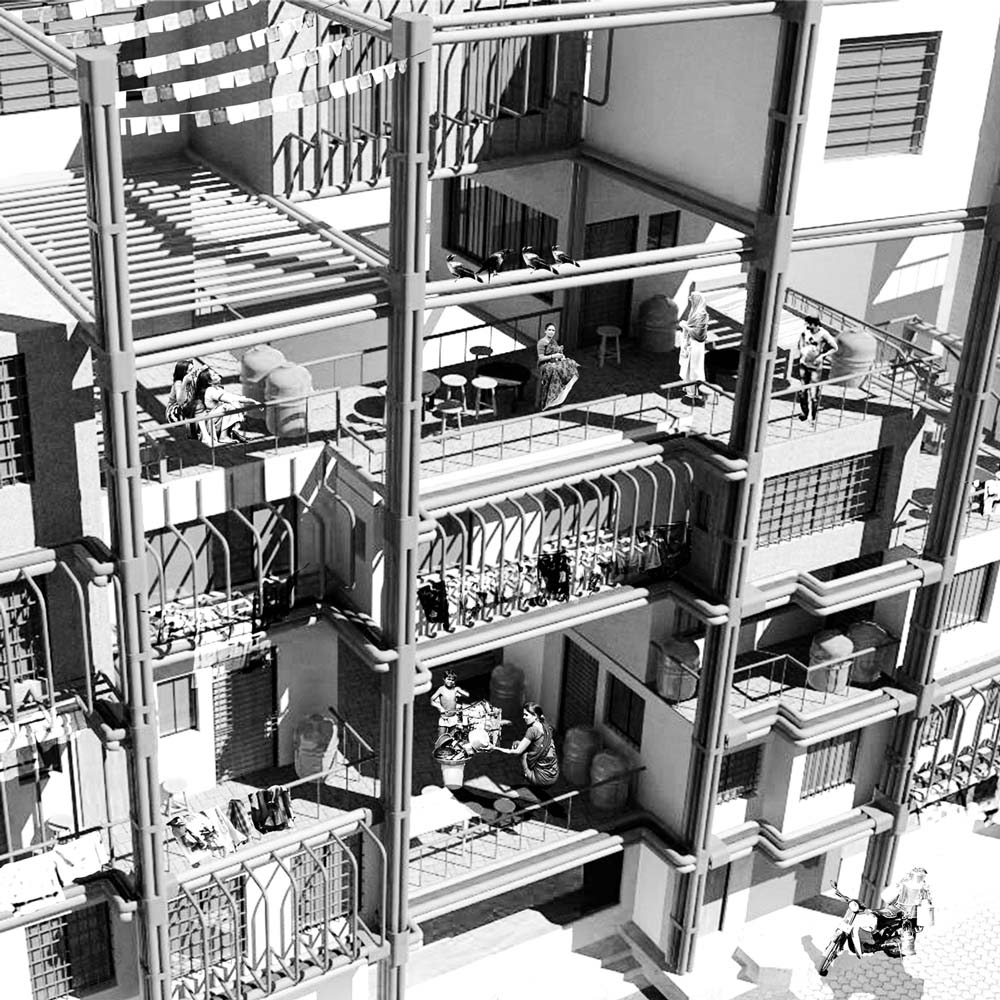 If architecture is to survive at all in a world of infinite complexity, where adaptability and reactivity are essential, the practise must be completely reinvented. Parametric urban design will not save us – despite whatever some generation-x prophets may be preaching. Supersizing the architectural objects and adding great internal complexity thanks to supercomputing capacities, will not be enough to respond to challenges that come from outside the practice and outside the project. Gated communities, university campuses, Special Economic Zones and smart cities are neurotic responses to the prevailing feeling among architects and planners that they are losing control.

We reject this gated future and the kind of architectural practice that feeds into it. We don’t want to run away from the world, no matter how toxic and unpredictable it is. Instead, we believe that twenty-first century urban practitioners must reinvent their role and invent new modes of engagement with the present reality. We believe that the best starting point is to learn from the existing context at all scales and work with the people who generate it locally.

As practitioners, we must be pragmatic, daring and optimistic. We must learn to deal with emergent forms. This necessarily implies another relationship to one’s own creativity. It is not about imposing one order onto another, but about connecting one’s own expertise with the knowledge of other actors who are rooted in their immediate reality. ■