Aleksandra Zarek is an architect currently working at award-winning Stephenson Studio in Manchester. Her internationally-oriented experience includes various practices in Berlin, Lisbon and Poland. She was trained at the University of Sheffield and Tampere University of Technology, where she developed an interest in using architectural and urban design as a tool for social engagement and urban transformation.

Her housing vision for the future was awarded a purchase prize by the City of Lahti in the ARA Home 2049 international student design competition.

Architect Aleksandra Zarek presents her thesis work: an holistic approach to urban transformation as a basis for socially-informed evolution of cities, increased quality of life and sustainable urban revival focussed on the example of the Kortepohja Student Village in Jyväskylä, Finland.

The problem of adapting and updating old building stock to contemporary living standards is currently being faced by many cities across Europe and beyond. This necessity holds the potential to enhance social sustainability in urban areas. However, cohesive regeneration cannot always be delivered through isolated restorations of single buildings without a larger integrated strategy.

This project involves the transformation of the Student Village in the Kortepohja district of the Finnish city of Jyväskylä, which is the subject of a proposal to renovate and rejuvenate it. The scheme was commissioned by the University of Jyväskylä’s Student Union (JYY) and is presently awaiting implementation.

The main goal of the project is to revitalise the existing building stock through a holistic approach at multiple scales, in order to create a high-quality-living environment for students and JYY’s staff as well as re‑establish the Student Village’s presence in the context of Kortepohja and Jyväskylä. The modernist façades of the Village’s historic core, designed by Erkki Kantonen’s office, were listed and given heritage status in 2008, meaning a sensitive strategy of respectful transformation is required for any renovation.

The project is based on three interlocking scales, which form the framework for a comprehensive, socially-focused revival: a development plan for Kortepohja; a masterplan for the Student Village and a detailed retrofit of the central Rentukka Student Union building.

A university city with the legacy of Alvar Aalto

The city of Jyväskylä is located in central Finland and in the western part of Finnish Lakeland. Jyväskylä University, students from which form the body of the Student Village’s residents and a significant proportion of the local population, has been a catalyst for the development of the city and in establishing its national and international reputation. 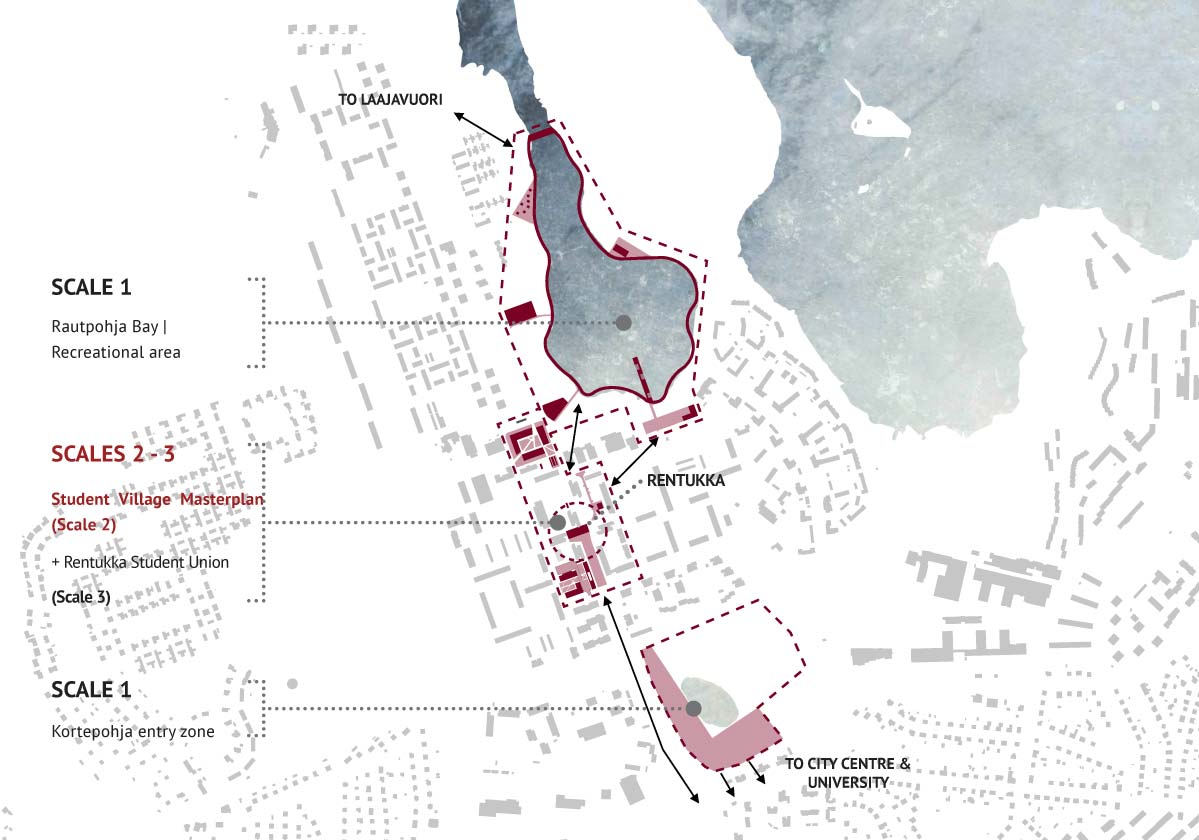 The university’s campus, as well as many other buildings across Jyväskylä, were designed by Alvar Aalto, whose reputation contributes to the international image of the institution and the city. This academic- and design‑oriented context provides a strong rationale for the rejuvenation of the village whilst at the same time being designed to enrich students’ experience and improving the quality of the built environment.

The first scale of intervention concentrates on the overall development plan for Kortepohja. The district is situated in the north-western part of the city, around three kilometres from its central core and the academic campus. The purpose of the scheme at this level is the physical and metaphorical consolidation of new and existing zones within its neighbourhood as well as reconnecting it back into the context of the city. 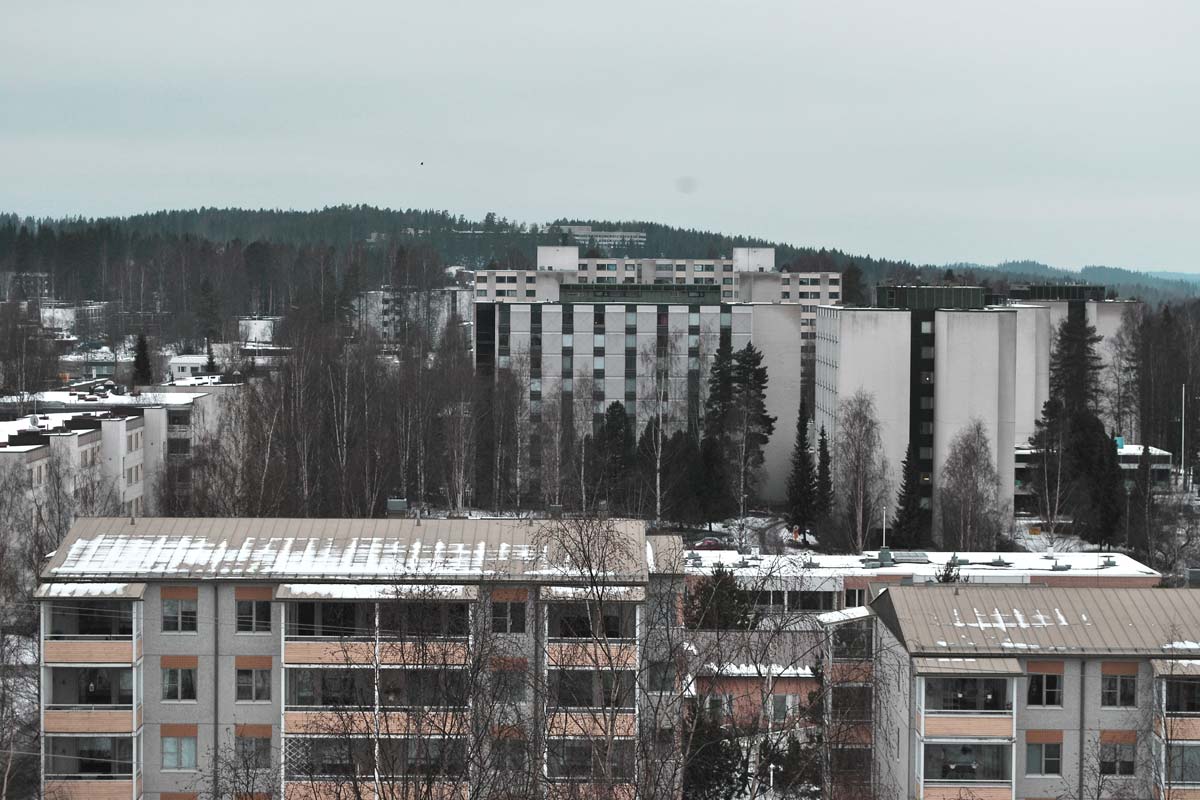 Kortepohja, whose construction was initiated in the 1960s as a result of the city’s and university’s growth, constitutes a peaceful residential area. Although it features a number of compelling modernist buildings and recreational zones, the perception of connectivity in the neighbourhood is severely disrupted by many undeveloped sites. 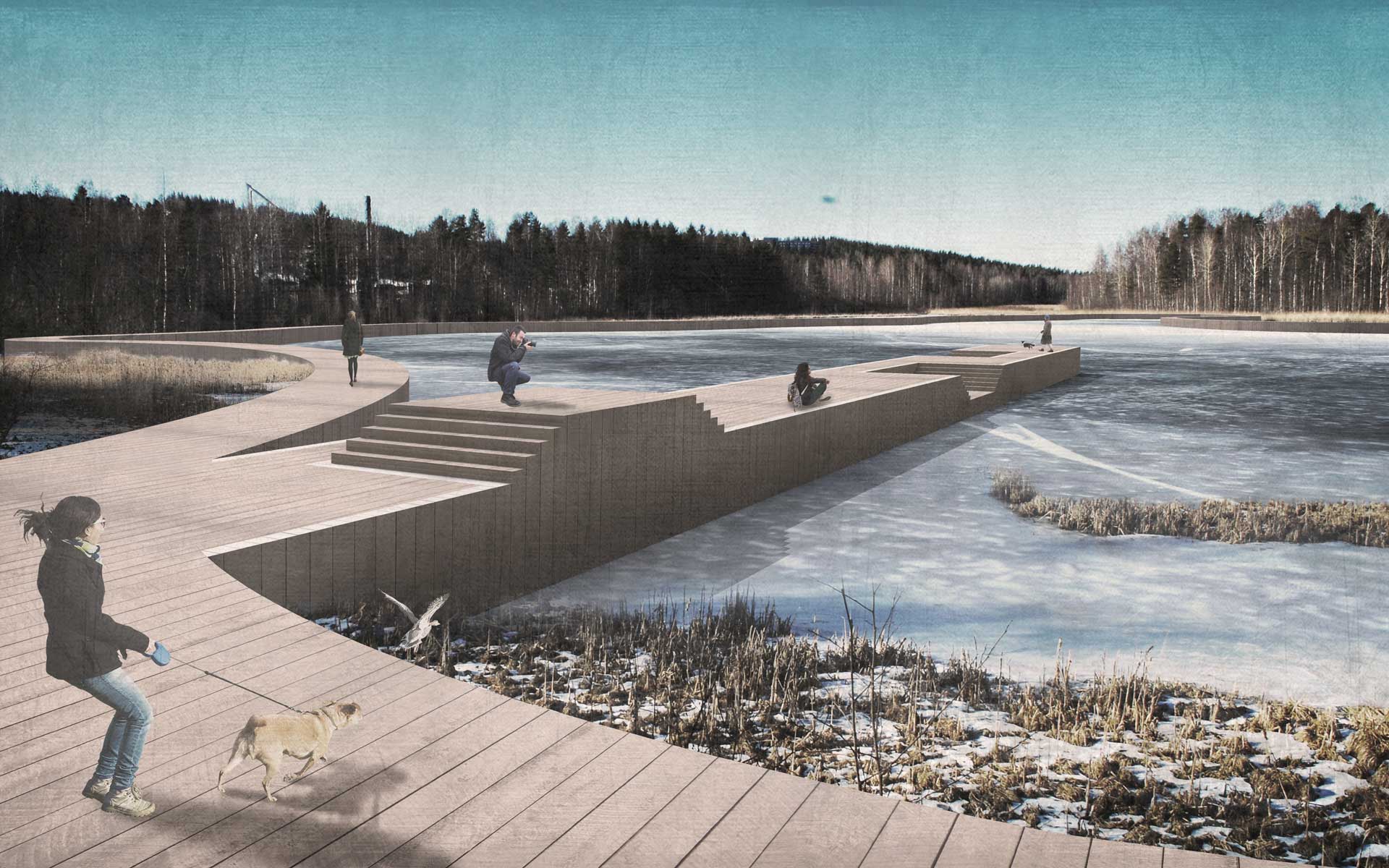 A series of holistic interventions in the district seek to improve the connectivity of its different areas such as the Student Village, the Laajavuori recreational park, the Rautpohja Bay area around the reservoir, or the entry zone to Kortepohja from the city centre. The scheme provides a detailed recreational proposal around the Rautpohja reservoir while suggesting the future development of the entry zone as an area of extended student housing.

The interventions around Rautpohja refresh its image as a scenic reservoir with significant wildlife. A boardwalk links the network of facilities, such as an observation pier, a public sauna, educational centre with allotments and open-air theatre, stimulating a rich and diverse recreational experience. This both enhances opportunities to contemplate the natural environment whilst offering leisure opportunities for students and local residents. The route could be extended to other adjacent areas, such as Laajavuori or around the Haukanniemi peninsula, emphasising the district’s integrated character.

The Kortepohja Student Village, located in the heart of Kortepohja, forms the subject of the second scale of development. The village constitutes multiple layers of development embedded in the context of the city’s and university’s growth. Its modernist core, with five high-rise blocks and the central Rentukka building, designed by Erkki Kantonen, Niilo Hartikainen and Jukka Kolehmainen, was built between 1968-1972 and has been listed since 2008. The village also includes subsequent construction from the 1970s, 1990s and most recently 2010-2012.

Originally, the village was infused by the omnipresent spirit of academia created by its community of students and academic staff living in a close-knit neighbourhood, in which Rentukka performed as an important social hub. At present, despite high numbers of students and their activities in the area, the fatigued appearance of the village has been the victim of unstructured and superficial developments.
To revive this dynamic atmosphere, this second scale of rejuvenation aims at consolidating the village through strengthening its circulation and visual perception. The front area, which one is confronted with when arriving from the city centre, lacks strong imagery and a clear sense of orientation. In addition, visual perception of Rentukka as a social hub is currently disturbed by a vast car park, trees and other fragmented additions.

“Originally, the village was infused by the omnipresent spirit of academia created by its community of students and academic staff living in a close-knit neighbourhood.” 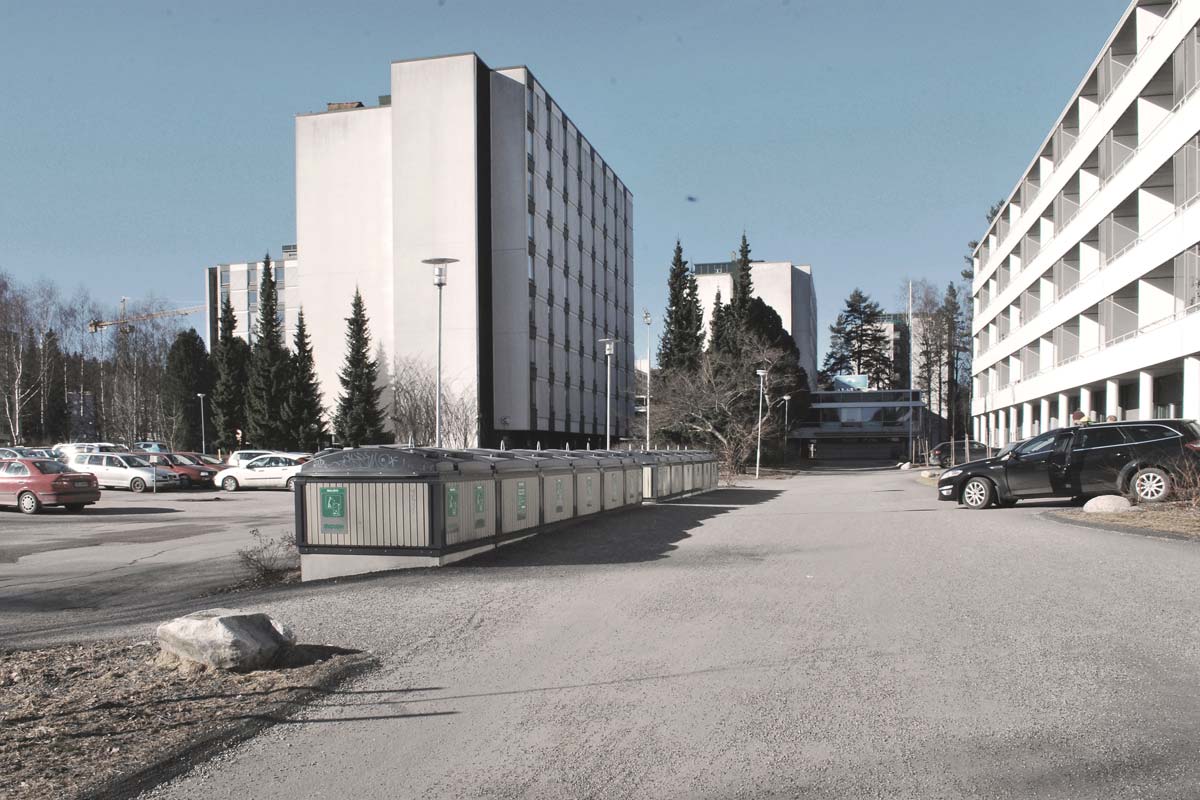 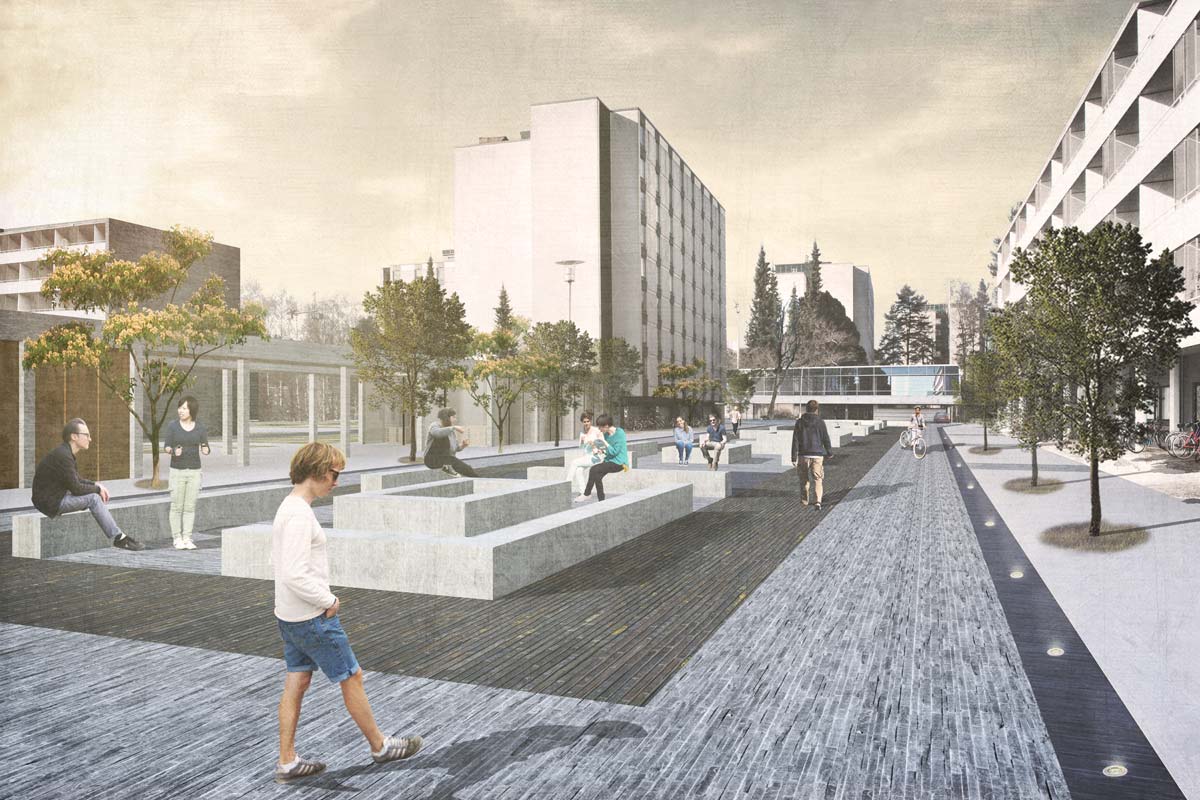 To resolve these issues in this key part of the village, its external spaces have been redefined into new functional zones. This has been achieved by the introduction of a new underground car park, which has freed up space for the insertion of new infrastructure above, including a students’ services pavilion, housing blocks and sports areas. Re-establishing the visual presence of Rentukka and its function as a community centre entailed the careful redesign of the approach to the building. It is now served by a prominent landscaped promenade with different surface treatment from the adjacent square.

The previously unused courtyard at the rear is now activated by a new greenhouse pavilion containing a community kitchen, complemented by outdoor growing facilities. These interventions aim at enhancing the existing greenery whilst improving circulation with a new landscaped path, lined with seating arrangements, floor lighting and marking the way to further parts of the village and ultimately to the Rautpohja recreational zone.

A new housing cluster has been proposed to replace buildings designated for demolition by the client. The new blocks have their own court and are designed specifically for students with families, being sited in a slightly more removed location with proximity to the recreational Rautpohja zone.

The Rentukka community building, which forms the centrepiece of the historical core of the Kortepohja Student Village, is the subject of the most detailed level of all the interventions undertaken.

Rentukka operated as a vibrant social and cultural centre for the area throughout the decade following its opening in 1972. At the moment its aesthetic appearance, as well as functionality, suffers from its peculiar layout with a rigid grid of columns and numerous partition walls, which has created poorly lit and cramped spaces at all levels. The top floor, which at the peak of the building’s former life once served as a chic restaurant, is currently being used only on an extremely occasional basis for social events. 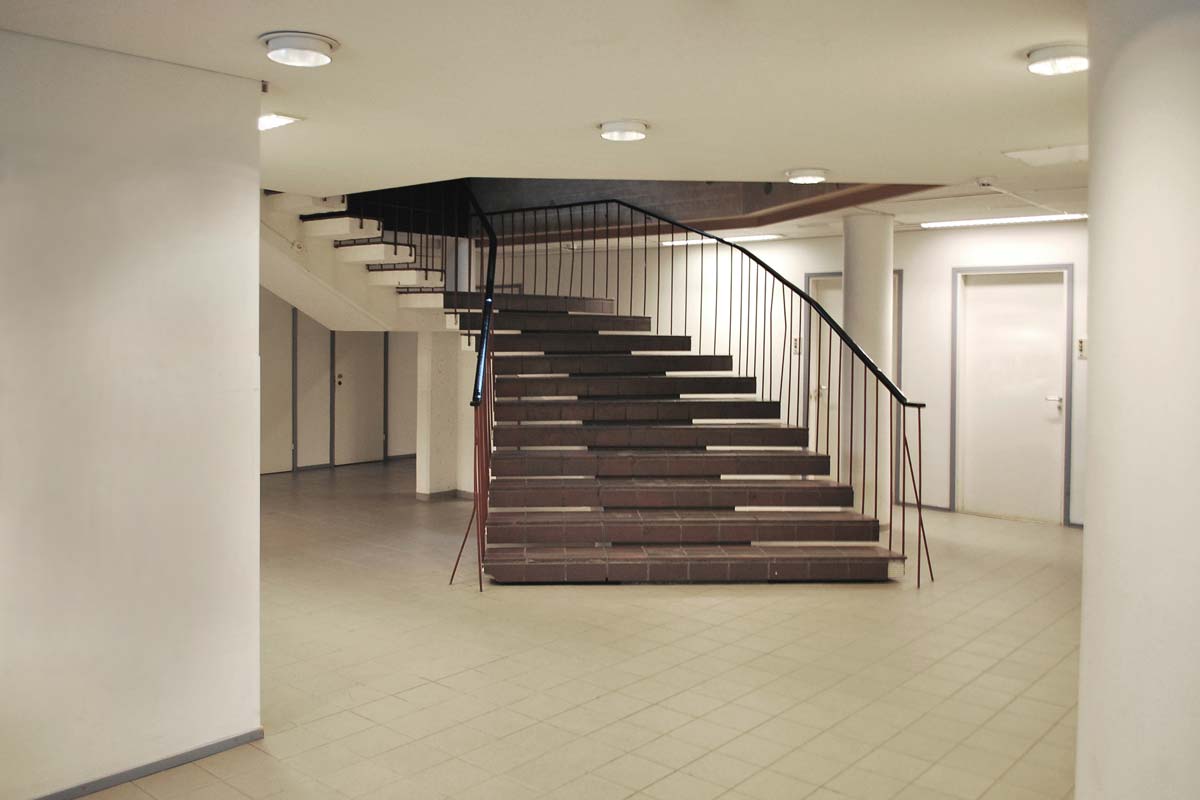 The fundamental changes proposed to the interior are based on notions of openness, spatial clarity of functions, better light performance and reference to the sculptural appearance of the original building. Due to the heritage status of Rentukka’s external envelope, most radical interventions had to be accommodated within the building’s shell, which stimulated the creation of tailored design solutions. 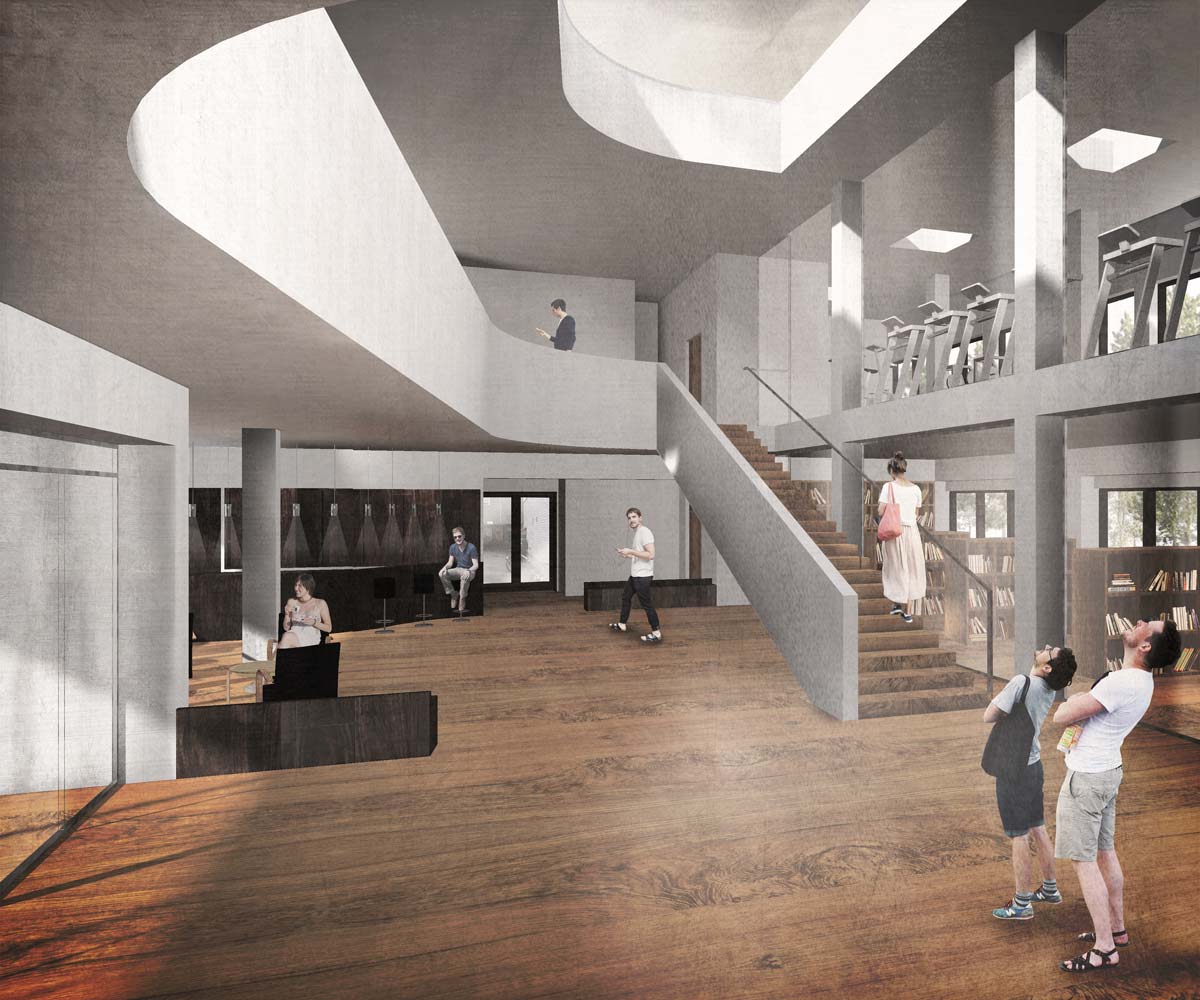 The main concept is based on opening up the ground and top floors to a new atrium, flooded by the light from a generous skylight, which replicates the form of this primary void. A continuous motif in the proposal is the profile of the concrete balustrade, which encircles the volume of the staircase and central void. This proposal, together with the free-form lobby and main skylight, is designed to convey an idea of spatial coherence, undoubtedly lacking in the previous interior layout. The orthogonality of Rentukka’s external prisms and it bold columnar grid are now counterbalanced by fluid, curvilinear shapes, which reference Alvar Aalto’s architecture across Jyväskylä University and the city.

One side of the atrium is enclosed by a curtain wall to allow light from above to penetrate the volumes of the gym on the top floor and the library on the ground floor. The smooth, white finish of walls and ceilings is designed to maximise reflection of natural light and create a subtle contrast with the warmth of timber elements such as floors, café counter and library shelving.

Student societies, previously scattered throughout the village using temporary arrangements, are now integrated into new functional areas within Rentukka, emphasising its social centrality. Some of them – for example, a new student services desk, cafe, library, gym and open study zone – are placed around the lobby to encapsulate its public atmosphere. The top floor also features a generous group exercise space, art workshops and choir rehearsal space. The separate Lillukka wing now accommodates a cooking club on the ground floor and an auditorium in the basement, which also incorporates a new band rehearsal space. 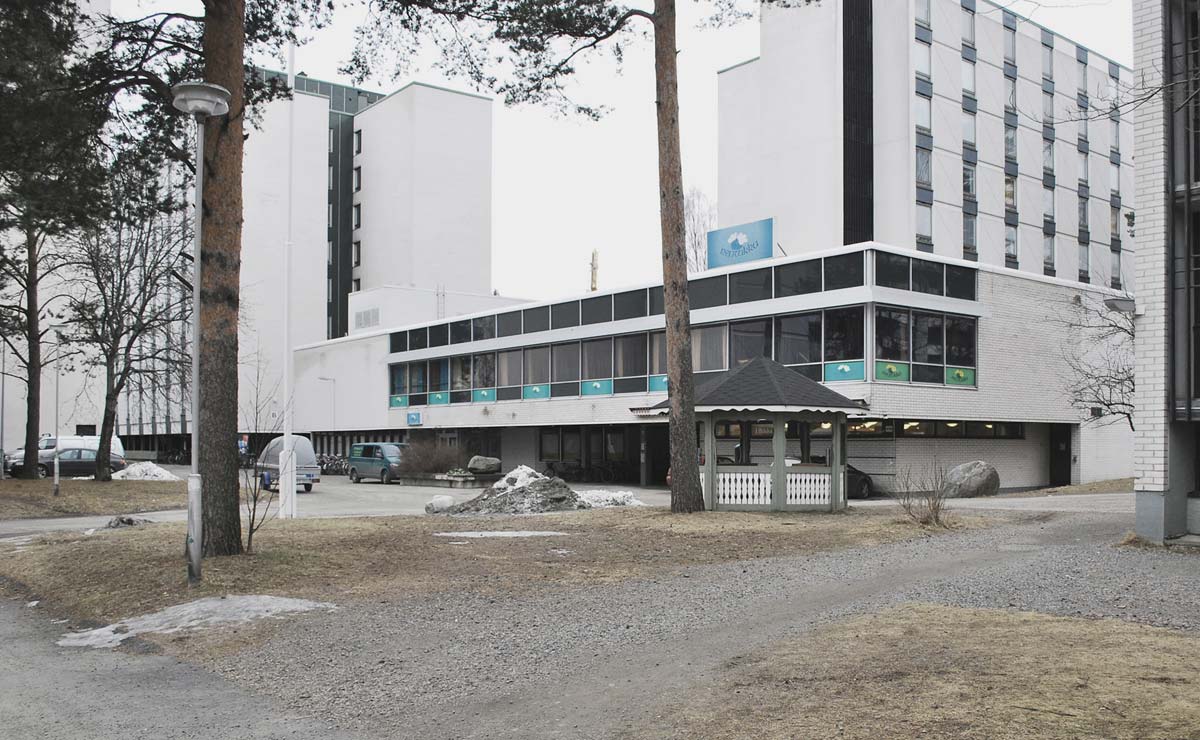 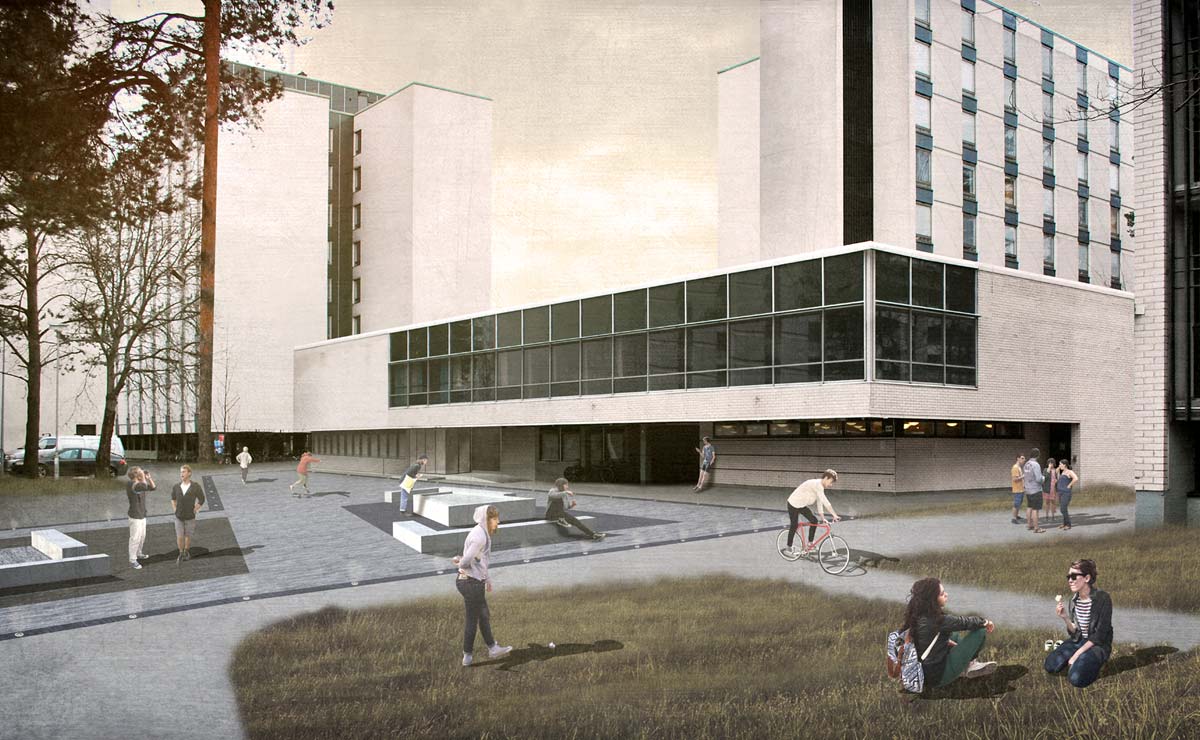 In order to enhance the clarity of the original volumes, Rentukka’s exterior will be cleared of its old superfluous additions. The outdoor area in front of the building is now animated by means of the adjacent new public square and connecting promenade, as shown in the masterplan for the Student Village. This further showcases the consolidated character of the interventions across all scales of development in the Kortepohja district, Student Village and Rentukka.

The three levels of interventions throughout the transformation proposal of Jyväskylä’s Kortepohja Student Village formed a comprehensive foundation for its socially-oriented revival. The framework consolidating a development plan for the district, a masterplan for the Student Village and a detailed retrofit of Rentukka acted as a basis for cohesive regeneration, which was built around an integrated and socially sustainable redevelopment strategy.

Recognising the potential of rejuvenation of a single building as a catalyst for integrated regeneration of the area was a key characteristic of the scheme and a crucial driver in conceptualising other development scales to create a multi-dimensional and therefore holistic transformation proposal, which addresses the city’s international reputation as a centre for academic excellence and of modernist design by Alvar Aalto. ■