The value of architectural tools for redrawing territorial complexity

The map as a tool needs to be mobilised, not for conquest and thus erasure, but as testimony and site of resistance to violence.

Nora Akawi is an architect and a director of Columbia Graduate School of Architecture, Planning and Preservation’s Studio-X Amman, where she leads the conceptualisation and implementation of public programmes and research initiatives on architecture in the Arab region. Since 2014, she has been teaching a graduate course there focused on borderlands, forced migration and human rights. She also teaches an urban design studio in the Architecture & Urban Design faculty focused on water infrastructure and distribution inequality along the Jordan Valley. Akawi studied architecture at the Bezalel Academy of Art and Design in Jerusalem and received her MS in Critical, Curatorial and Conceptual Practices in Architecture from Columbia GSAPP.

A specialist in re-imagining political and spatial mapping in the Middle East, architect Nora Akawi questions the received understanding of territories and borders at a time when the figure of the refugee is “central to contemporary politics”. In doing so she illustrates precisely the level of complexity involved in contemporary spatial planning and highlights the value of architectural tools in trying to make sense of it all.

Despite many attempts to undermine its transformative effect, the year 2011 represents a turning point in Arab history. Although met with repressive violence by regimes in power, the uprisings across the region carried with them an alternative vision of how people and resources could be organised in the world. But the protests and demands for dignity, freedom and social justice were drowned in a bloody orchestration of violence that continues to this day.

Beneath this deafening field of violence is a parallel silence facilitated by the international community, as stable flows of money, oil, arms, building materials and contracts for reconstruction flow across borders. Simultaneously, people fleeing destruction and persecution are barred from crossing those same borders; those that do make it are quickly rendered invisible. Amongst all the opposing opinions and theories about what is actually shaping the future of streets, cities and lands in between, there does seem to be one point of agreement: that we are in an era of significant transformation defined by the mass displacement and erasure of countless individuals and their livelihoods.

During the 2011 uprisings, people embarked on a collective project toward democratic change and a just reorganisation of governance. This remains an ongoing project within which architecture, in its various forms of practice, is invited to reclaim agency. Representational tools in architecture can be activated to make overlooked injustice visible, make silenced narratives heard, make sense of ungraspable scales of infrastructure and, perhaps, even make the spatial conditions of social justice imaginable. In the words of Felicity D. Scott, architecture can be a medium or practice that “widens the field of social and political struggles” and makes available its disciplinary tools and forms of knowledge to “bring new material to the table”.1

In this context we turn to studies of radical imaginaries of the left from past and current struggles, local and internationalist, and most importantly we ally ourselves with liberation and social justice grassroots movements currently working on the ground to remain, to return, to commemorate, to liberate, to demilitarise, or to decolonise. Through such alliances architectural practice, whether within or without academia, can be part of the public’s reclaiming of the right to illustrate collective and decolonised imaginaries.

We are part of a growing population that has been taught to read and consume maps of the world, of bordered territories, of roads and cities that simply don’t apply to our experiences of that world. Maps that don’t recognise the presence of our towns and cultures within them; that fail to show the violence of apartheid or the racial segregation that we know divides our communities; that are oblivious to the carceral nature of states; that erase the illegal exploitation of land and the theft of resources from one community for the benefit of another. The repressed histories, realities, violence, resistance and imaginations that are omitted from dominant normative maps of territories are precisely the ones that need to be drawn.

“Architectural practice, whether within or without academia, can be part of the public’s reclaiming of the right to illustrate collective and decolonised imaginaries.”

In his book Terror and Territory: The Spatial Extent of Sovereignty, the critical geographer Stuart Elden points out that the word “territory” has its etymological roots not just in the Latin word terre (earth), but also in terrere (to frighten).2 With the role of sovereignty being that which overcomes a territory’s other organisation, territory is then haunted by the fear of the other and map-making and boundary-marking becomes the way to establish sovereignty over a territory. As colonised spaces are inhabited by new rulers, these sites are also given new meanings and new names – they are reassigned.
The map as a tool needs to be mobilised, not for conquest and thus erasure, but as testimony and site of resistance to such violence.

“The figure of the refugee is central to contemporary politics.” 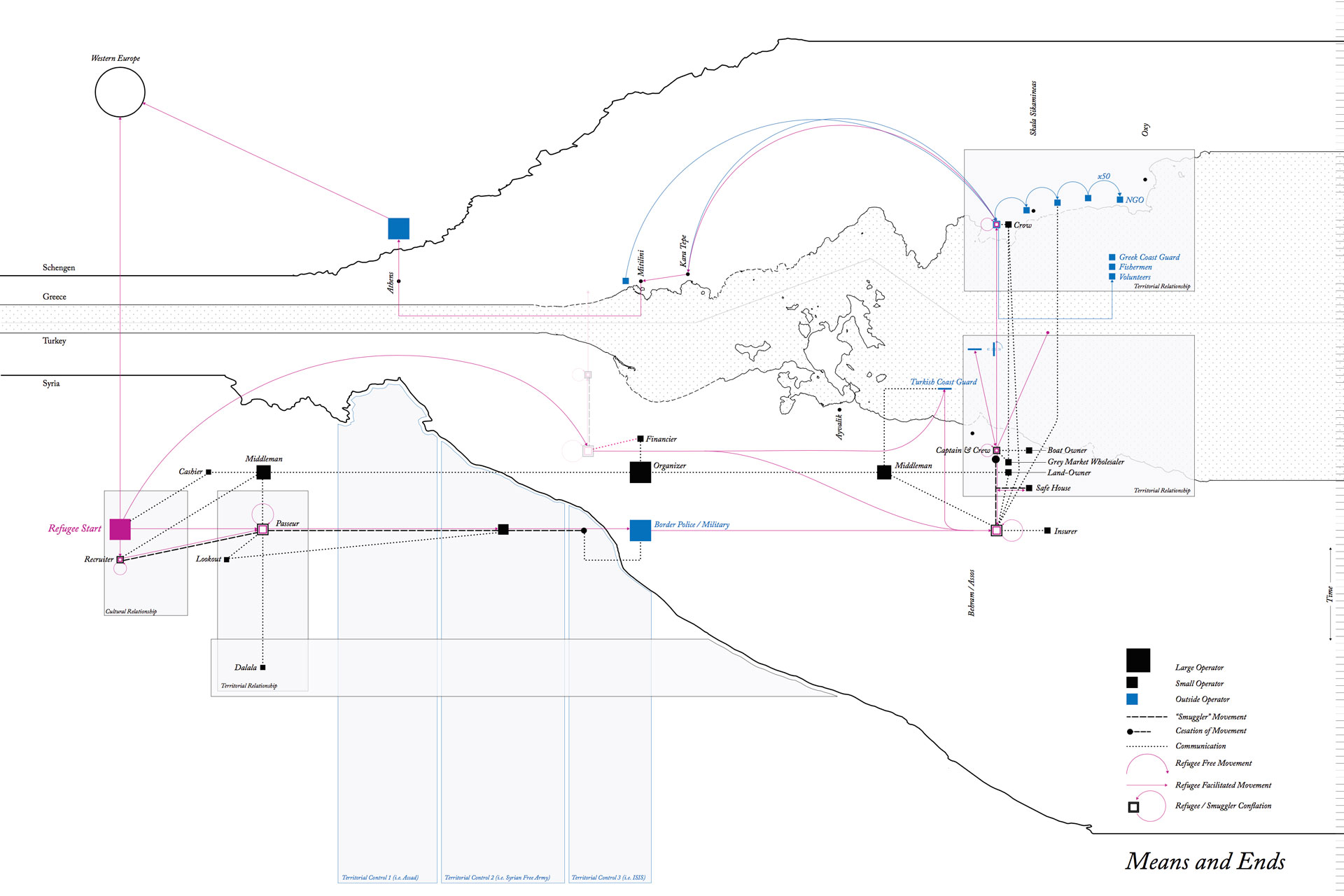 The drawings developed in a project called Mapping Borderlands3 initiated through Studio-X Amman at Columbia University’s GSAPP aim to represent ambivalences and discontinuities of seemingly uncontestable territories. The project takes as a starting point, and challenges, our understanding of territoriality, which is still heavily rooted in our imagination of the world as being divided into compartmentalised, distinct and mutually exclusive political formations. The mappings consider that borders are physically manifested through fences and trenches, but also through biometric identification technology, refugee registration offices, exclusion from jobs and healthcare, plus fluctuating policies and regulations. As political theorists suggest that the figure of the refugee is central to contemporary politics, the project aims to visualise movement and its suspension, both regular and irregular, lawful and unlawful, recognised and unrecognised, as the central elements that define contemporary territories and geopolitical terrains. Challenging conventional, static representations of what are in fact dynamic and unstable conditions, the projects mobilise familiar visualisation tools and activates them not as static representations, but as processes in themselves: “not to be taken as technologies of capture, but as techniques of addition, drawing and critically investigating processes of bordering”.4 The hope is that rather than reading borderlands as fixed and static conditions, through a critical analysis and representation of processes of both the building and dismantling of borders, new imaginaries for territories can emerge. ■