Arquitectura Subalterna (Víctor Cano Ciborro, José Javier Cullen, José de Andrés and Ana Sabugo) is a collective based in Madrid that seeks to provoke, activate and reflect on the space needs and aesthetic forms required by bodies inhabiting space. Their work focuses on the narratives of subaltern groups that are not identified with any specific buildings or city lifestyles. Their line of enquiry has been internationally recognised at the Oslo Architecture Triennale 2016, Venice Biennale 2016 and the XX Chile Biennial of Architecture and Urbanism 2017.

Today, fully immersed as we are in the post-truth era, reality seems to be verified through data and surveys that seek to monitor our decisions and postpone the social and spatial conflict caused by late capitalism. Appealing to notions such as affection, feeling, eroticism or identity has become necessarily rare to allow for contemporary spatial dynamics. However, these emotional rather than rational dimensions are visualised with great intensity in the periphery of cities, particularly where modernist paradigms take the form of great blocks built in avenues far removed from the human scale.

The children and grandchildren for whom these architectures were conceived now occupy the spaces, but not in the way their parents or grandparents were told; in the catechism of the Athens Charter or Modulor’s dogmatism. Rather, it is from a point of “profanation”, or, in the words of the Italian philosopher Gigorio Agamben, “restoring the space to the free use of men”.

These contemporary inhabitants, presented as “Modulor’s Bastard Children” – a complex and fascinating cosmos of subaltern groups (including immigrants, homosexuals, refugees and women) who refuse to be accomplices to an environment constructed from imposition, regulation and dogma – rebel against a deeply ideological space designed for the honourable behaviour of a white super-man, 1.83 metres tall with an athletic figure: Le Corbusier’s Modulor Man.

In this context, inhabiting the modern periphery becomes a powerful act of resistance, where feelings, aesthetics and identities reaffirm and strengthen forgotten bonds in modern constructions. The periphery is now a confrontation between the emotional dimension of the space, where the body fights to be recognised, and the rational one where, to paraphrase Lefebvre, the self‑destruction of desire reigns supreme. 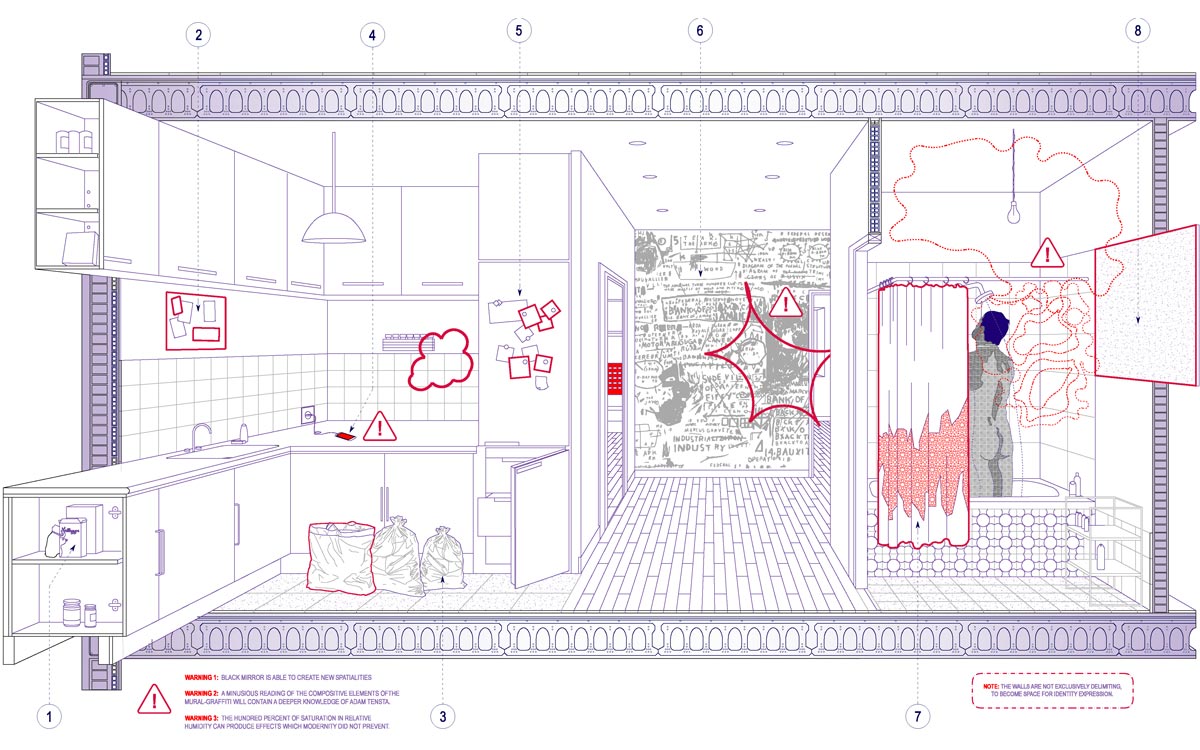 This project aims to visualise through accurate cartographic narratives the problematic imaginary and aesthetics of inhabitants locked in a model of city and architecture that collides head on with their daily experiences and needs. It necessitates a spatial approach that goes beyond assessing the beauty or ugliness of the architectural object to focus on the relationships between bodies and space. This is in keeping with Rem Koolhaas’ approach towards architecture as being “no longer a matter of building or conditioning a square, but of narrating stories”.1 These stories, which for Modulor’s bastard children are daily actions of the periphery, remain hidden because architecture does not completely accept them as possible or appropriate due to their subversive and mundane connotations. Here is one of them:

Adam Tensta is a black rapper who won the award for Dance/Hip Hop/Soul Album of the Year at the 2008 Swedish Grammis. He was born and raised in the neighbourhood that is both his artistic surname and the title of his debut album (It’s a Tensta Thing). Tensta is a neighbourhood on the outskirts of Stockholm that suffers the consequences of the Housing Million Programme, a public-housing programme implemented by the Swedish Government between 1965 and 1974: a literal translation of modernist urbanism ideals into social housing. At present, it is described as a troubled ghetto that few inhabitants from the city centre would visit. In Tensta, the young people who are marginalised by the system have created their own “neighbourhood aesthetics” where all small narratives are recognised. 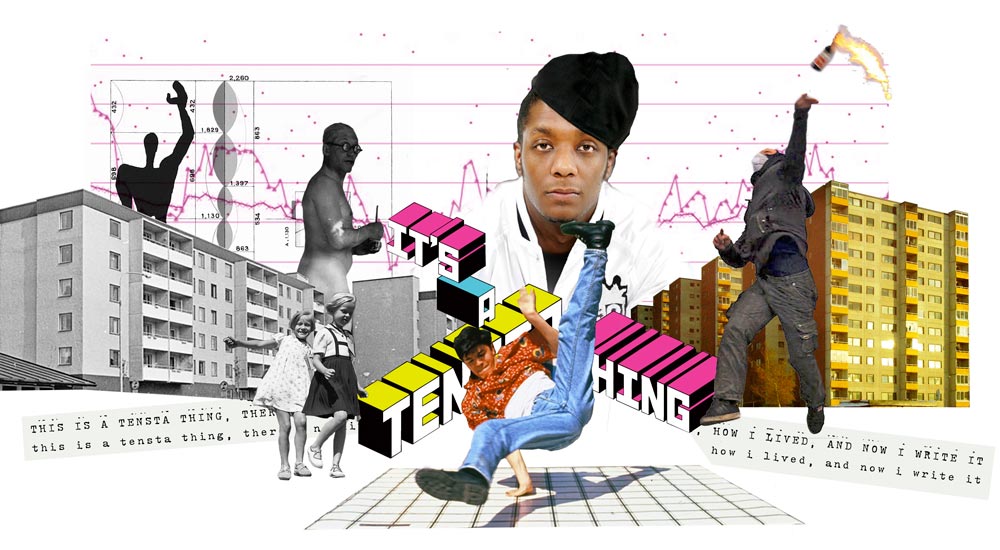 Tensta was designed to accommodate the 1970s Swedish nuclear family stereotype, consisting of four white, blue-eyed and blond-haired individuals (father, mother, son and daughter), who rejected any approach that deviated from the norm. Faced with these fictitious and archaic domesticities, Adam’s home is a case of daily resistance reflecting a much more complex, individual and extremely real world. 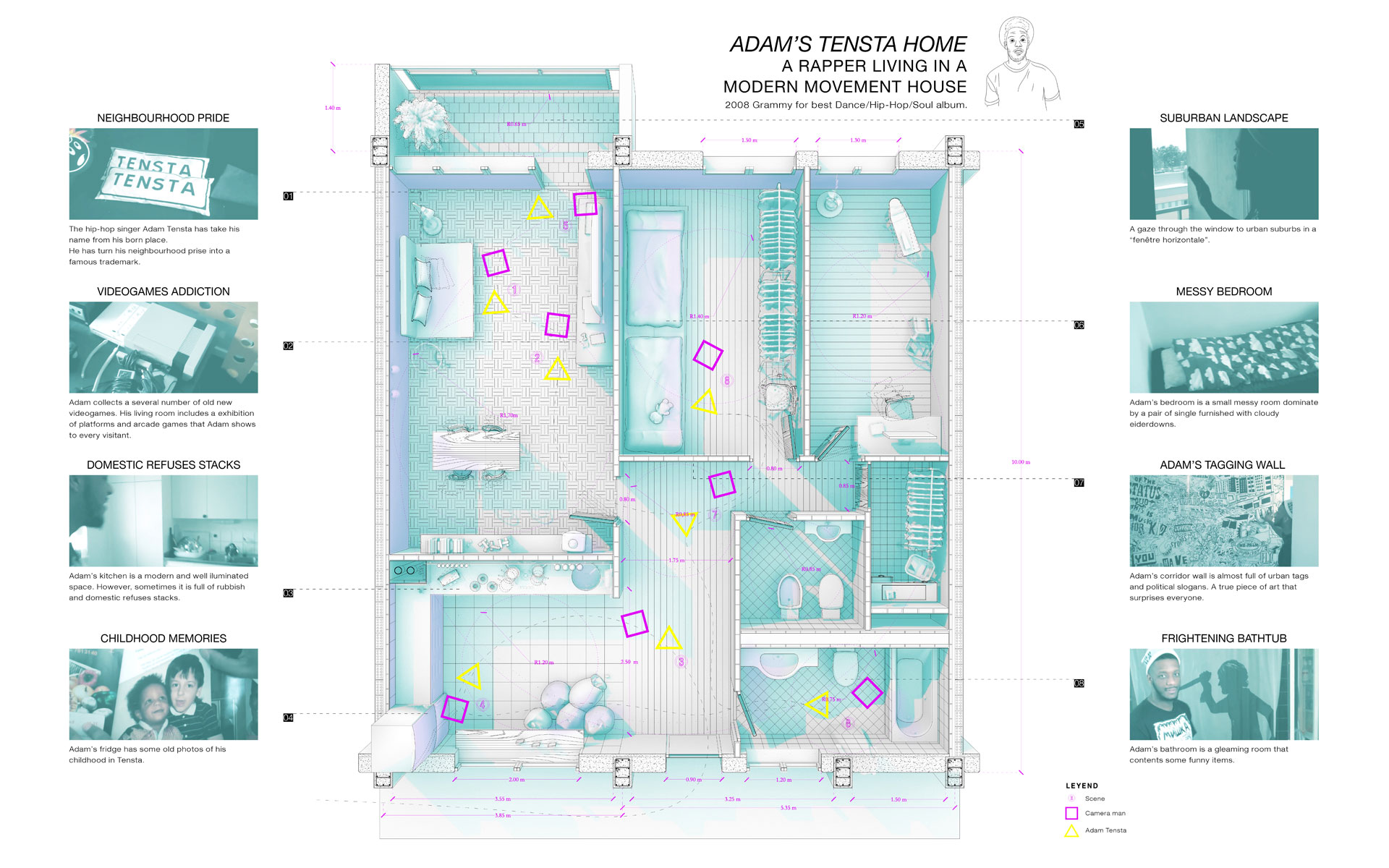 How do today’s residents live in such houses? How does a successful young rapper live in a modernist house? How do these affections become visible in new forms of domesticity? Approaching these questions is only possible through the surfaces that wrap and decorate the current homes. Surfaces that Modulor’s Bastard Children understand as skins. The skin, in Paul Valéry’s words is “the deepest thing there is”,2 and it is full of memories and meanings for their inhabitants. Analysing how the house is decorated, and putting value in these new identity forms are new and pertinent contexts of action and architectural representation.

The houses of Tensta are decorated mostly with emotional objects and skins, creating atmospheres far removed from white purist walls. Persian carpets, clothes as exotic as they are banal, graffiti or shower curtains, are elements used to reinforce identity in a completely foreign construction. Modulor’s Bastard Children do not need patterns to configure their space because they are guided by their own emotions, feelings and aesthetics.

Crowded housing, illegal practices in the entrances and scenes ranging from innocence to violence and sex in the communal areas of these concrete blocks, are the spatial realities of these peripheries. These realities will only be overcome if they are allowed an informed architectural dimension. Since, as Bernard Tschumi states: “The fascination with the dramatic, either in the programme (murder, sexuality, violence) or in the mode of representation (strongly outlined images, distorted angles of vision – as if seen from a diving airforce bomber), is there to force a response. Architecture ceases to be a backdrop for action, becoming the action itself,”3 the body becomes a perceptive and stimulating element of all the sensitive data that the cartographies carried out by Arquitectura Subalterna intend to transmit. ■