Maite Borjabad is a Spanish architect, researcher and curator working in Chicago and New York. She is currently assistant curator of architecture and design at the Art Institute of Chicago. Previously, she worked at The Metropolitan Museum, and Arthur Ross Architecture Gallery and developed projects at the Emily Harvey Foundation, New Museum Incubator (NY) and La Casa Encendida (Madrid) among others. Her work revolves between architecture, art, politics and diverse forms of critical spatial practices.

As a critical view on how architecture materialises legal frameworks and political apparatuses, Scenographies of Power seeks to disclose, register and reveal the implications of physical space and architectural articulations to the construction of scenarios that not only stage our contemporary political apparatus but also become witnesses of such power structures.

Scenographies of Power is ongoing research that has already produced diverse projects. One of them is the exhibition, shown here, which proposes a reflection upon spaces that materialise the “state of exception” as well as a critical reading of the typologies that these spaces of exception conform to. This exhibition, which took place between June and September 2017 at La Casa Encendida in Madrid, aspired to claim the spatial articulations that make it possible to institute and enforce the state of exception as a tool of power wielded by contemporary political structures. The exhibition – which looks at diplomatic spaces, airports, contested borders and court process – reveals how, within these spatial materialisations of the exception, the aesthetic becomes political.

These spaces of exception are interrogated by different artists, who work with that which takes place within them. They use disruptive propositions to critically represent, record or reactivate, allowing alternative readings of the political framework that hosts each space. The featured works include: Delivery for Mr. Assange, A Live Mail Art Piece, RRRRRRRRRRRRRRRRRADICAL REALTIME! by !Mediengruppe Bitnik (CH/UK) who sent a package to Julian Assange at his office in the Ecuadorian Embassy in London. It was fitted with a GPS-mode telephone and a camera programmed to take a photo every ten seconds and upload it onto a Twitter account showing a live feed of its journey.

Another work created by Trevor Paglen (USA) is a sculpture called Autonomy Cube, which is a Wi-Fi hotspot that anyone can use wherever it is installed, but unlike normal internet connections it is a Tor relay that routes all of the Wi-Fi traffic over the Tor network, a global network of thousands of volunteer-run relays designed to help anonymise data. When Autonomy Cube is installed, both the sculpture, host institution and users become part of a privacy-oriented, volunteer run internet infrastructure.

Contraband, a piece by Taryn Simon (USA), comprises 1,075 photographs taken at both the US Customs and Border Protection Federal Inspection Site and the US Postal Service International Mail Facility at John F. Kennedy International Airport, New York. For one working week, the artist continuously photographed items detained or seized from passengers and express mail entering the United States from abroad.

Something About Contemporary Nomadism is a video installation by Gulnara Kasmalieva and Muratbek Djumaliev (KGZ) that also addresses policing and security measures in border environments in a different context. Their film was shot illicitly in several airports in their home country. The shots from their hidden camera captured not only the quotidian airport ritual of the body search, but also revealed the conditions under which the film was made. Coming from a country with a strong historical tradition of nomadism, the artists comment ironically on its contemporary version. 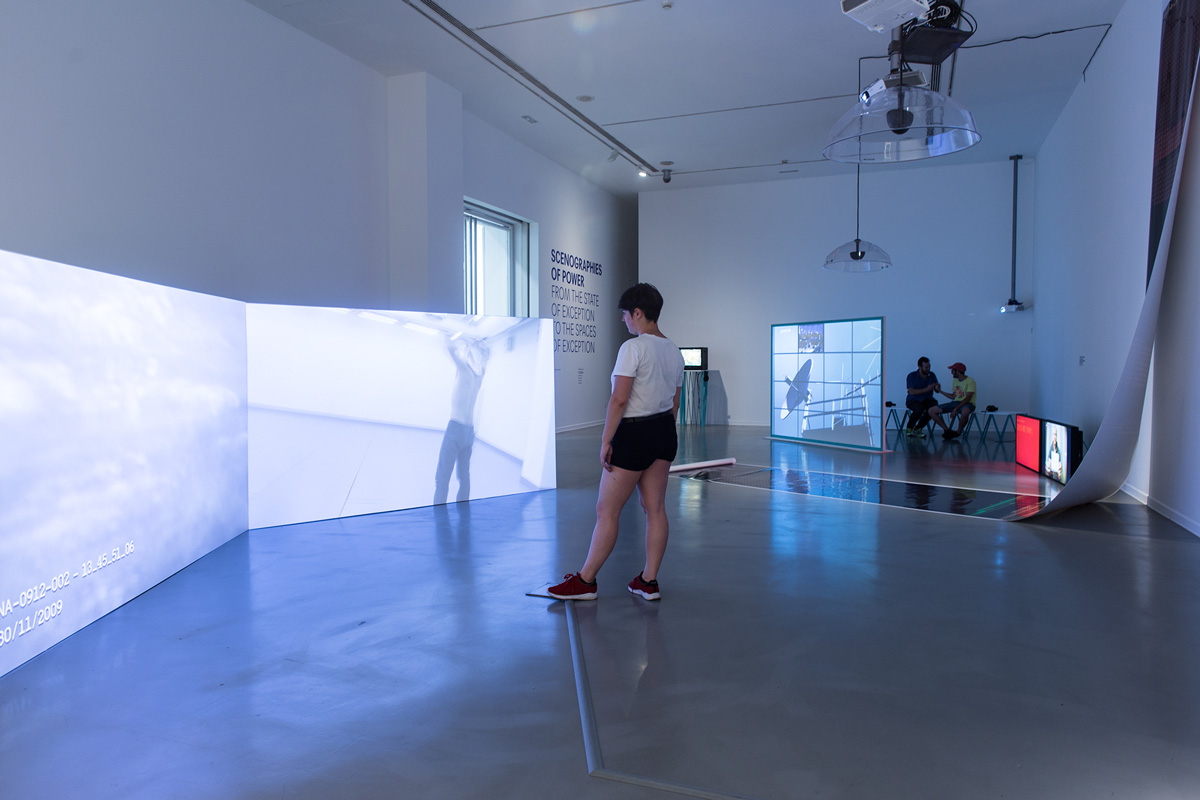 Scenographies of Power is an invitation to rethink spaces of exception in order to decipher and mobilise the relationship between law and power. The exhibition evinces the affective impact these spaces can have, alongside their respective legal and political protocols. Each work in the exhibition approaches the debate from a specific type of space of exception, reactivating that space through a subversive action that facilitates alternative interpretations of the political apparatus in which it is situated. Thus, Scenographies of Power aims to question these spaces as materialisations-in-progress of the state of exception, as living spaces that are under construction and, therefore, can be interrupted, modified, re-articulated and re‑programmed as we challenge the validity of their political underpinnings. ■