We know that there are lots of people around in academia that are looking for other ways of dealing with the real world.

George Kafka is a writer, editor and researcher based in London. He is a founding member of &beyond and deputy editor at Thinking City. He has written about architecture and cities for The Architectural Review, Disegno, Blueprint, Metropolis and Frieze, among others.

“What is a school if not a promise?” asked Ethel Baraona Pohl and César Reyes of dpr-barcelona, and Rosario Talevi of the Open Raumlabor University, on the occasion of the 2018 Istanbul Design Biennial, entitled “School of Schools”. There they staged a collaborative Parasitic Reading Room that aimed to provoke “a contagion of knowledge” as it roamed the city. The school, as a nebulous site and idea, is at the centre of much of dpr-barcelona and raumlaborberlin’s work – as is a profound optimism. This manifests itself not in a blindness or naivety, but in a grounded practicality: trust in the abilities of others and the inkling that a radical future is just around the corner. Another project, the Floating University, was initiated by raumlabor in Berlin and was imbued with the same spirit. Here, the promise of a school collided with Berlin’s urban politics and water infrastructure on a floating structure inflated with radical hope.

On the north side of Tempelhofer Feld, an airport‑turned‑park in southern Berlin, lies a large ditch. Surrounded by lots and bungalows and noticeable only to those in the know, this nineteenth-century basin holds rainwater drained from the airport’s defunct runways before it is fed into Berlin’s canal network.

“We knew it was kind of a secret spot in the centre of the city that nobody had on the map,” explains Benjamin Foerster-Baldenius of raumlaborberlin architects. That is, until this summer.

From April to September 2018, the basin was occupied by a peculiar, offshore structure – a constellation of scaffolded volumes and floating platforms with inflatable rooftops and a large wheel. It was part pirate ship and part Princeton; part Archigram and part Burning Man. This was the Floating University, the brainchild of Foerster‑Baldenius, Florian Stirnemann and raumlaborberlin, and the locus of a number of events throughout the summer – architectural, educational, and otherwise – that hopped aboard the floating structure. 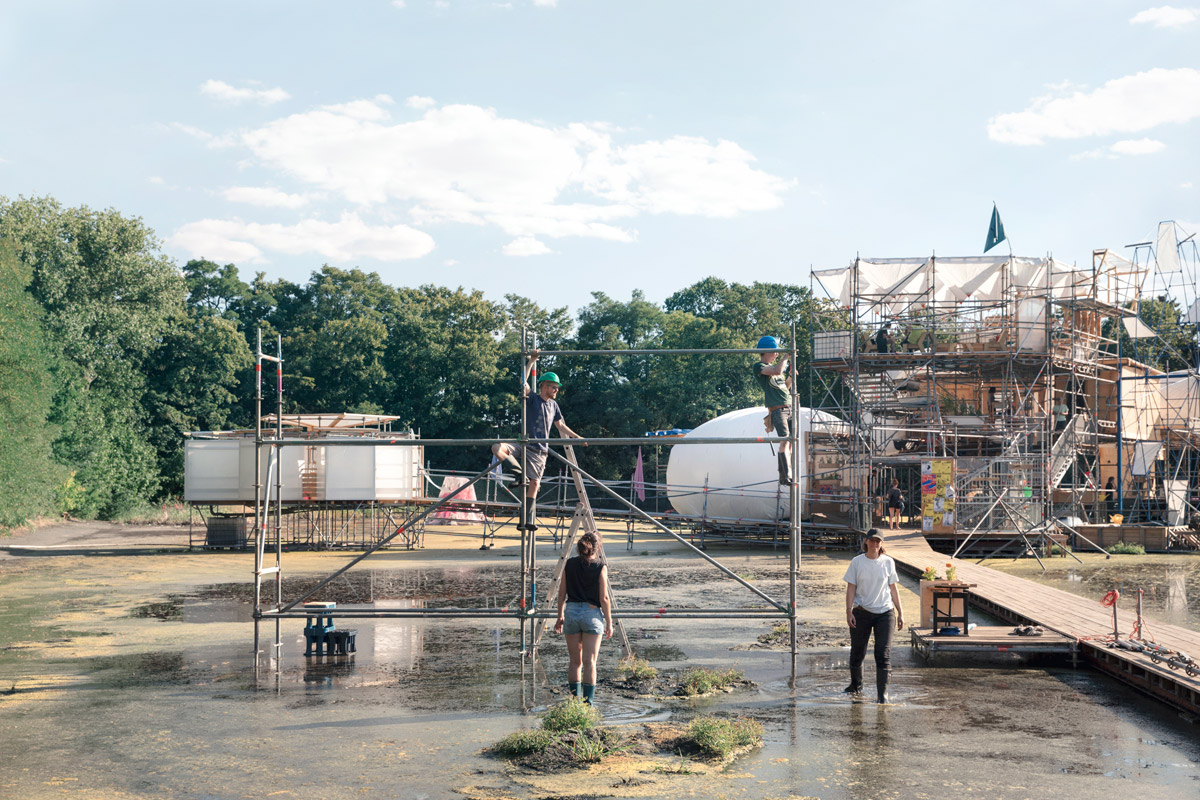 Funded by the German Federal Cultural Foundation as part of its ongoing Bauhaus centenary celebrations, the university was initiated by raumlaborberlin as a continuation and expansion on its previous education experiments such as the Osthang Summer School (2014), Urban School Ruhr (2016-17), and Making Futures Bauhaus+ (2018, in cooperation with the University of the Arts, Berlin). In these cases, raumlaborberlin has taken its signature playful and process‑focused approach to architecture and urban planning to broaden the often rigid or exclusionary nature of education.

“We know that there are lots of people around in academia that are looking for other ways of dealing with the real world,” explains Foerster-Baldenius. “Ways of getting together and finding things out together, not only within the campus, but also more open to the public.” 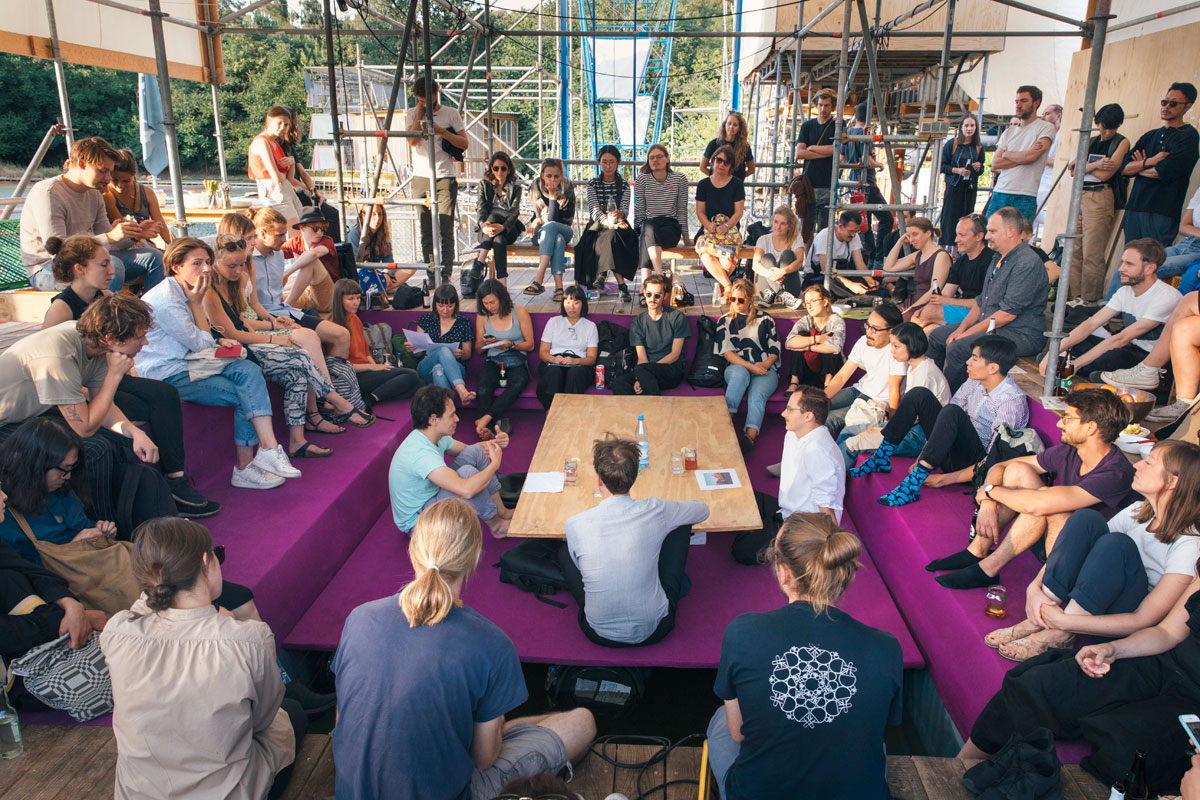 This public-facing approach gave the Floating University its architectural form and a truly unique series of spaces. From a dusty side road, a small gate led visitors onto a metal staircase with a balcony overlooking the basin, giving a dramatic first glimpse of the university structure. Through a thicket of tomato and potato planters, a waterside walkway led to the centre of the structure. Here, a 100-seat auditorium (with a separate floating floor) stood beneath an inflated tarpaulin roof. 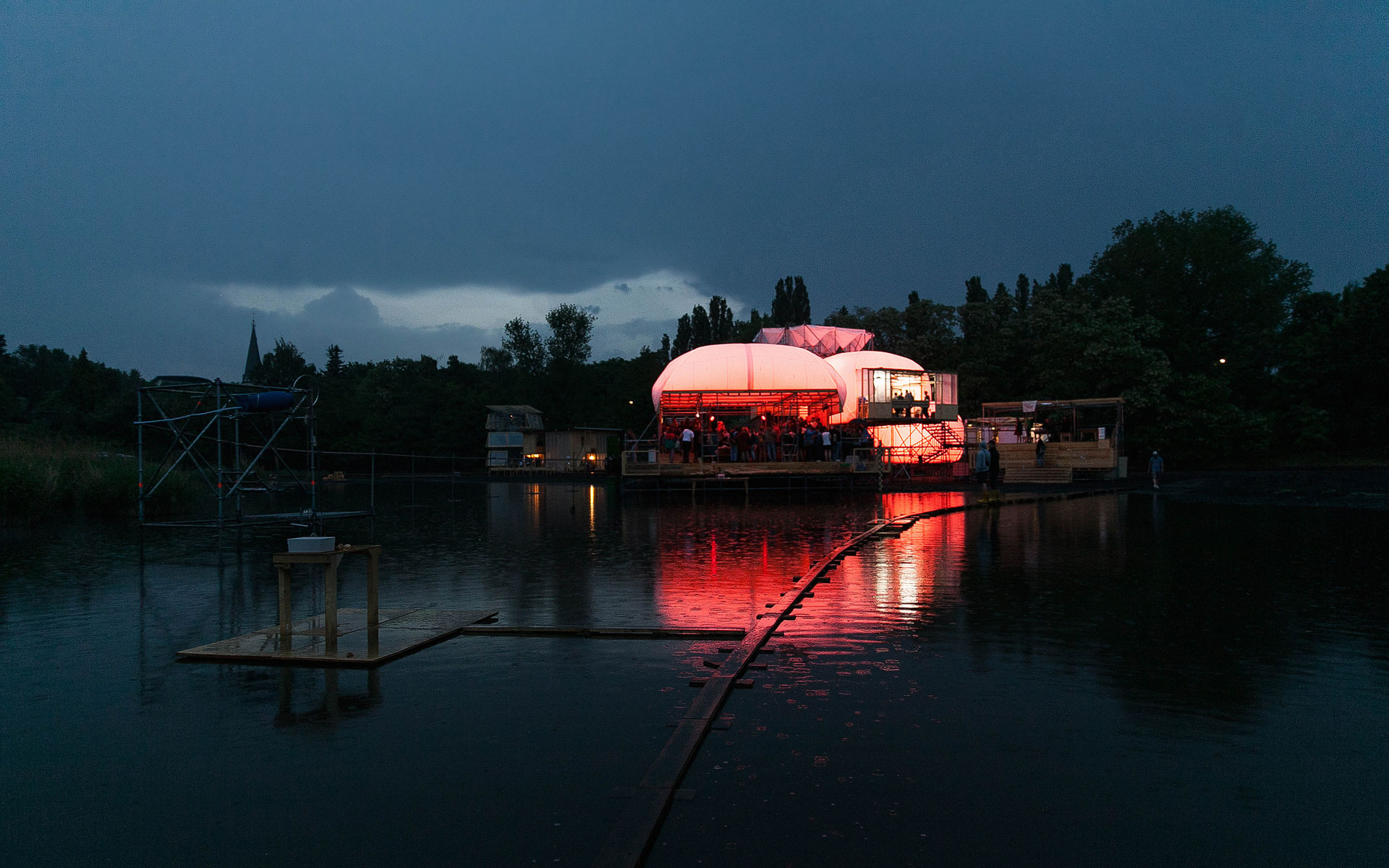 Elsewhere, a modular kitchen was designed by architecture students and other participants of a workshop on the socio‑spatial history of the kitchen. An innovative water filtration system, designed by artist-in-residence Katherine Bell, used a wheel to draw the ditch water through a series of interconnected bathtubs containing biological filters such as sand-biofilm, mushroom mycelium and zebra mussels.
Located at the back of the auditorium, the manual operation of the wheel took place every hour, creating a constant reminder of the bizarre surroundings. The transparency of the workings of the structure and its semi‑natural location were a central part of the experimental education taking place on the site: “It’s really hard to stay serious because there’s this nature theatre around you, which is just so funny,” says Foerster‑Baldenius. 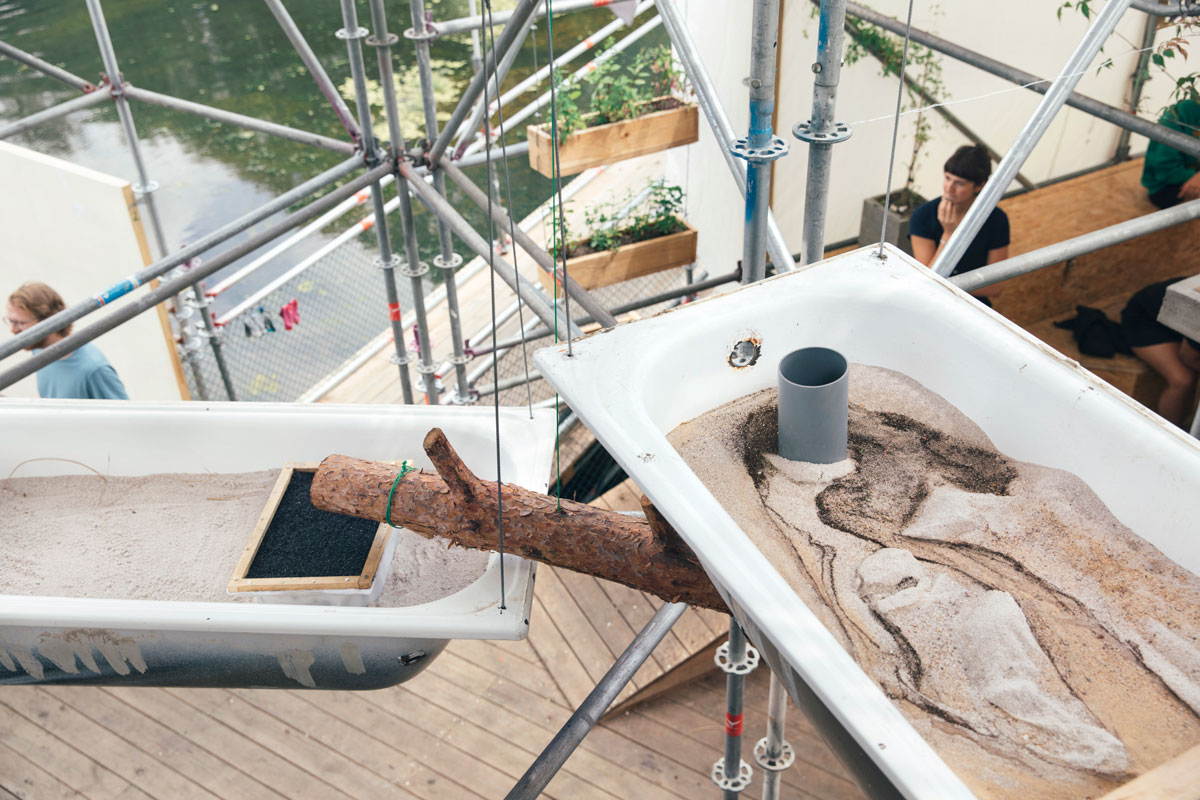 Over the summer, 25 affiliated universities – hailing from Bogotá to Paris – plugged into the structure for experimental seminars and workshops, while a parallel public programme drew Berliners and visitors into discussions spanning urbanism, experimental sound art, water consumption and the legacy of the Bauhaus. On a given Saturday afternoon one might find kids stomping around in the swamp (rubber boots provided) and out‑of‑towners touring the site whilst attendees joined a performance circling the ditch, enjoyed drinks at the bar, served lunch, got a haircut or listened to a lecture by Forensic Architecture’s Eyal Weizman – all at the same time.

Despite the resounding success of the university in expanding design education and opening public infrastructure to new uses, the project’s funding ran out at the end of the summer and deconstruction of the university began in September.

This is not, however, the end of the story.

Over the course of its existence the project gained interest and support from city politicians, local media and, thanks to a final Floating Symposium (that ended, of course, on the floating dance floor) to discuss the future of the structure, plans are underway for it to set sail again in 2019.

As Markus Bader, also of raumlaborberlin, explains, “The Floating University is an experiment on many levels. Since the experiment was so successful, many people are now working on a possible next season.”

Initial discussions are centred around synchronising the contributions of the different visiting universities, so that each one adds something new to the ever-evolving site. “The Floating University is not the object,” says Bader. “It’s the spirit and the amazing collectivity that was started this summer.”

Foerster-Baldenius is equally optimistic for the future of the basin site itself: “The city is dealing with the surrounding gardens to develop something new out of it and we would like to have a word in this development. We’ve opened up an area in the city that was asleep for 50 years, and now we have a responsibility for it.” * ■

“The Floating University is not the object. It’s the spirit and the amazing collectivity that was started this summer.”

* An earlier version of this article was published on Metropolis (metropolismag.com), 4 October 2018.