Miguel Braceli is a multidisciplinary artist working at the intersection between art, architecture and education. His practice is focused on participatory projects in public space. Most of these projects have been large-scale works, developed in countries such as Argentina, Bolivia, Chile, Costa Rica, Mexico, Spain, Sweden, the usa and Venezuela. His works explore notions of borders, migrations, homelessness, national identities and social-political conflicts. Braceli is Associate Professor in the Faculty of Architecture at the Universidad Central de Venezuela and currently a Fulbright Scholar at Maryland Institute College of Arts.

Biblioteca Abierta (Free Library) is an ephemeral intervention for reprogramming the ground and transforming public spaces. Thousands of books are laid out on the ground for people to take away freely. The form of the work changes as people add or remove pieces of the installation. It is an artwork in transformation that makes process part of its substance, promoting exchange and reading from a playful approach in urban space.

The first work of the series arose at the Central University of Venezuela as part of the National Strike of State Universities in 2013. Its purpose was to reveal the value of the academy, taking its knowledge production out into the public space.
It was a gesture that sought to incorporate civil society into the university conflict, to add more people to the struggle for the vindication of conditions in Venezuelan universities.
It has since been installed in Plaza de la Castellana and Barrio Pajaritos Chacao, Concha acústica de Bello Monte, Baruta and Fundación Sala Mendoza, Caracas.

Thanks to its systematic nature and interactive condition, this was a project that could also be developed in other public spaces outside Venezuela. Biblioteca Abierta is a work that allows action, meeting and the crossing-over of information through the exchange of books. Taking these texts abroad is an invitation to read and for citizen participation. It is a search for other dialogue formats within public space. For a few hours, more than 1,000 books are laid out on the ground for people to freely collect and exchange. It works as a collection centre as well as a donation space in the city. 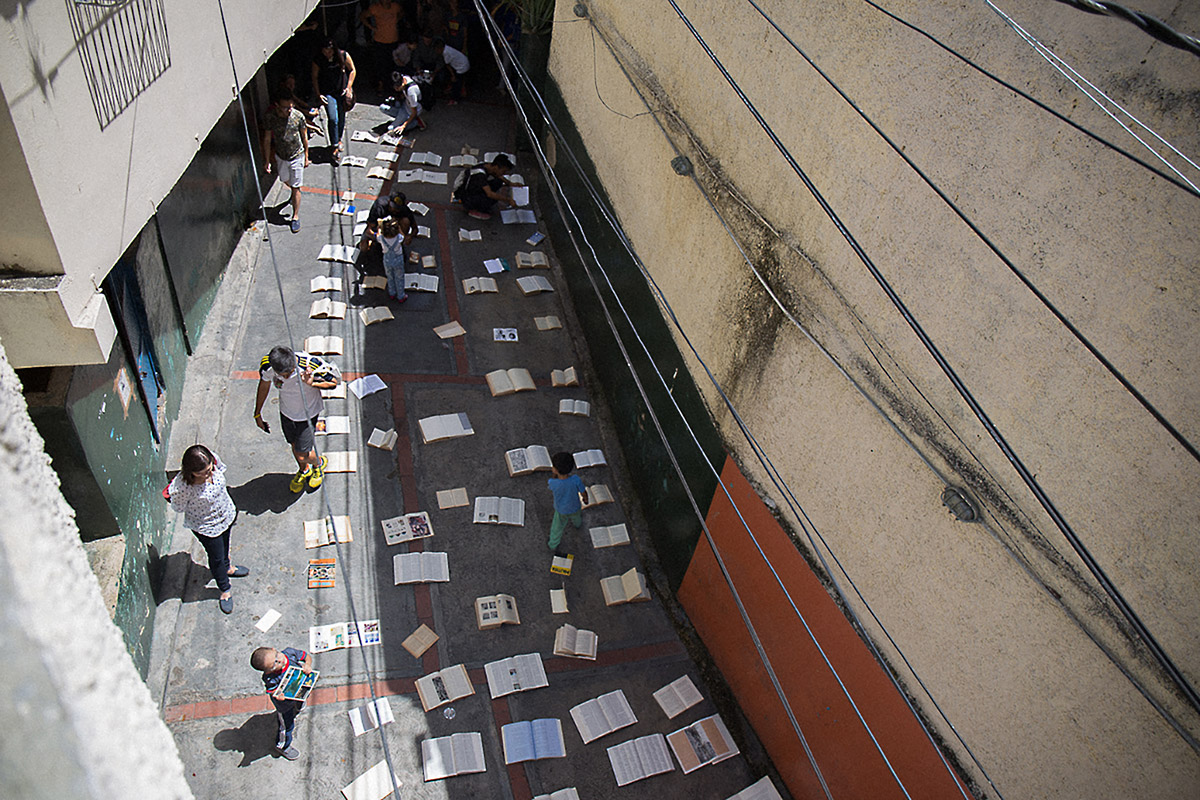 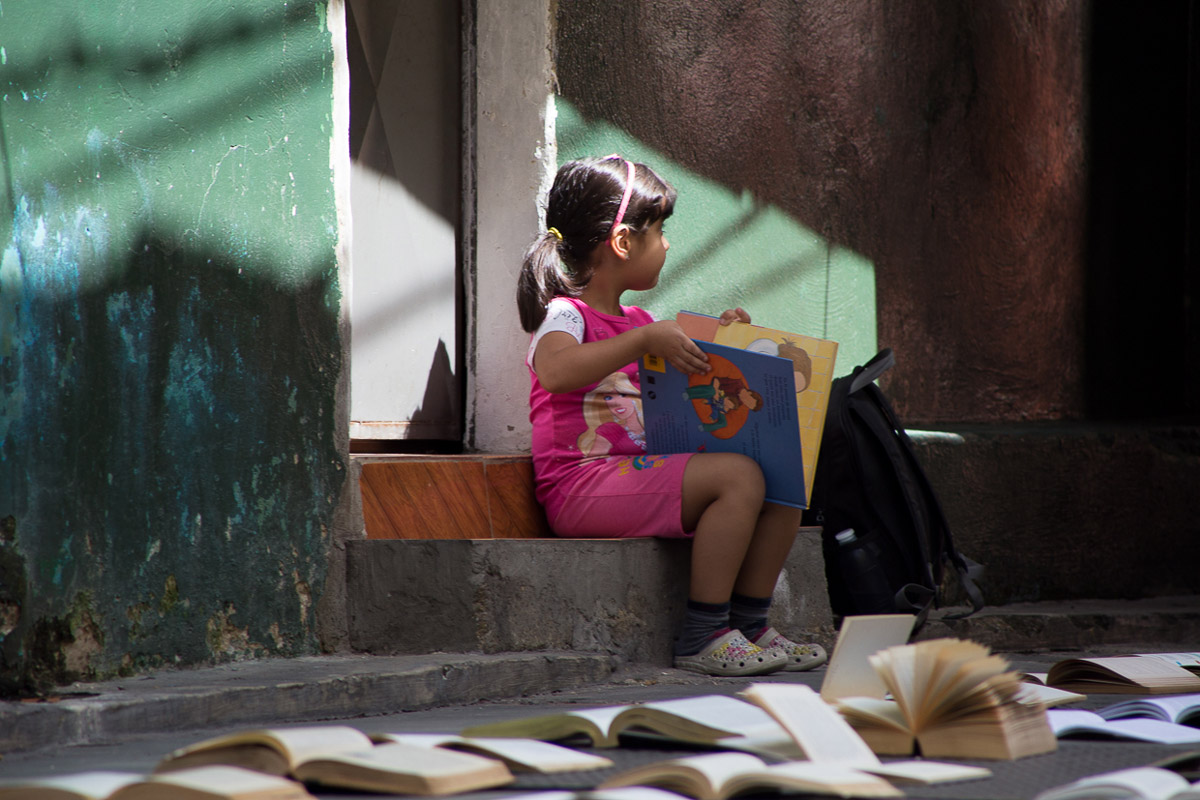 This work is situated between art and architecture. It makes use of one of the most elemental components of architecture; its programme. By implementing function only, it is an architecture that seeks to build without erecting walls. From art, it gives continuity to a large number of social practices in the public space that substitute the creation of objects for the construction of their relationships. Art today approaches society in a different way, it tries to re-establish relationships with life beyond its representation. There is a relationship of exchange between the work and the spectator, a mutual transformation. As an artistic project, it acquires social commitment based on its ability to contribute to improving living conditions, seeking to insert itself into the collective environment and generating new modes of participation and confrontation. The social content of the public arena has extended the participation of art to more complex spaces of interaction, processes that make the city and the common citizen the basis of these explorations.

Biblioteca Abierta develops these dynamics from a performative condition. For a few hours, these texts lose their function as objects of knowledge to become compositional material. They are forms in motion; a product of the spectator’s action; they are drawings in space that change according to their consumption, until they disappear. 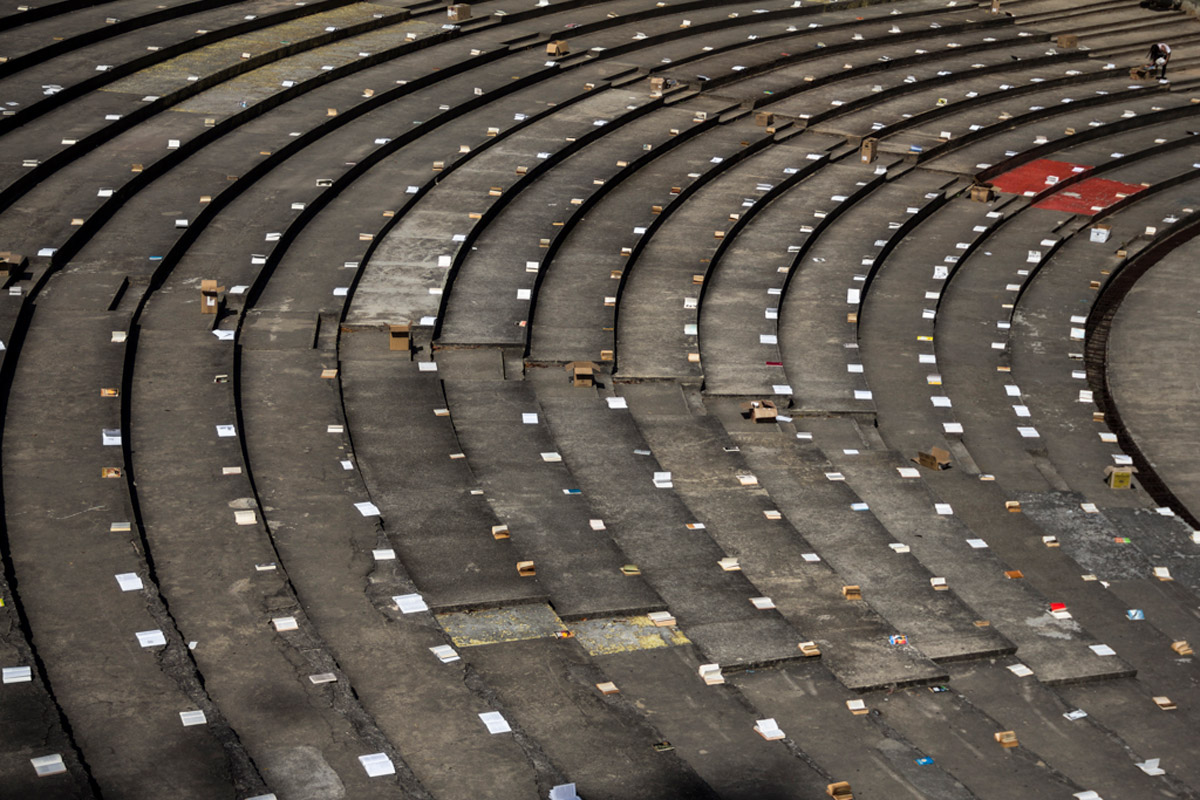 It is a work as extensive as it is austere. It is made with few resources, which makes its minimalism its greatest attribute. As an architectural project, spaces are built through their occupation, reprogramming the surface with many possibilities and few resources. ■